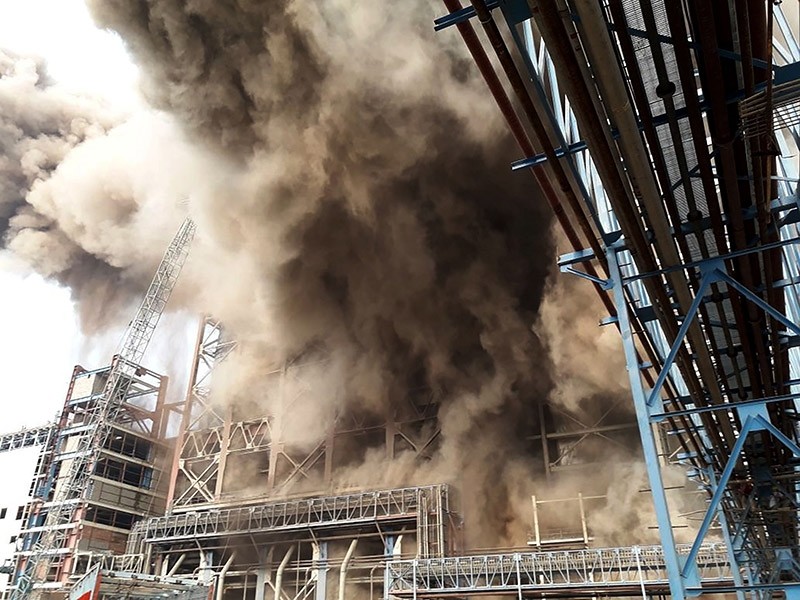 Smoke billows from a coal-fired power plant after a boiler unit exploded in the town of Unchahar in the northern Indian state of Uttar Pradesh on November 1, 2017. (AFP Photo)
by Compiled from Wire Services
Nov 01, 2017 12:00 am

At least 12 people were killed and dozens more injured in an explosion Wednesday at a thermal power plant in northern India, officials said.

Sanjay Khatri, the area's top administrative officer, said a pipe carrying ash from the burning coal exploded in the newly installed boiler at the power plant in Unchahar in Uttar Pradesh state. The explosion spewed hot ash over workers at the plant.

Police said the death toll is likely to increase because at least a dozen workers suffered severe burns.

The 500-megawatt unit was operating on a trial basis.

Khatri said the cause of the accident wasn't immediately known. It also wasn't clear how many workers were in the plant at the time. Witnesses described a massive explosion and thick smoke rising from the plant.

A team of government rescue workers was sent to the site.

Uttar Pradesh chief minister Yogi Adityanath offered his condolences to the families of the dead and offered each compensation of 200,000 rupees ($3,096).

Workplace accidents are common in India, where poor safety standards and lax enforcement of regulations have led to horrific deaths.

India's power distribution system is prone to accidents, mostly because of poor maintainance and underfunding in rural areas.

An electricity transformer exploded outside a wedding in the western state of Rajasthan Tuesday evening, killing at least 13 people including a pregnant woman.

Dozens of guests had assembled for the ceremony in Jaipur when the transformer blew up, spewing hot oil and metal shards.

Nearly 10,000 people died of electrocution in India in 2015, according to the most recent data available from the national crimes records bureau.