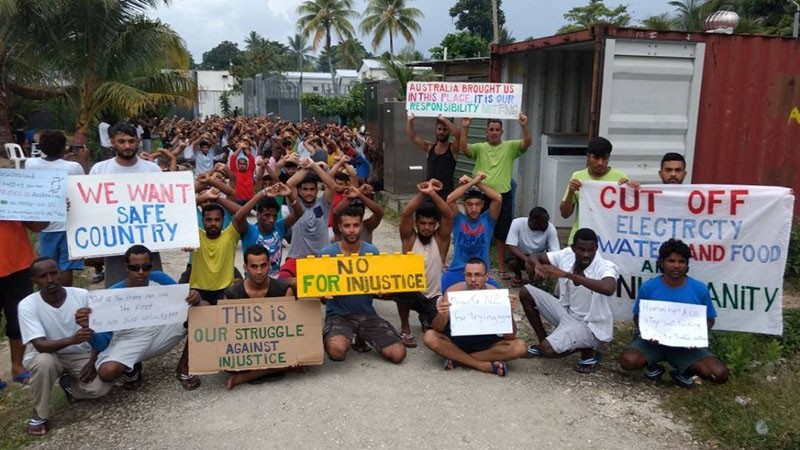 The PNG Supreme Court has stated it will provide a ruling Tuesday, after lawyers for the asylum seekers Monday applied to the court to order authorities to immediately restore food, water and electricity to the camp. The request cited heightened fears for the men's welfare, several of whom require medical treatment.

Electricity, water and food supplies were cut off at the Australia-run detention facility when it closed last week, per a PNG High Court order.

Food remains extremely tight despite locals reportedly delivering some supplies over the weekend via boat to the rear of the camp.

"The men really need food and water. They are severely dehydrated and a number of them have pretty serious health problems such as heart issues," Elaine Pearson, director of Human Rights Watch told Reuters.

Yet PNG's Immigration Minister Petrus Thomas said Monday, "as services are available at the new facilities, there is no need for services to be reconnected."

The refugees have refused to move to temporary accommodation -- some of which is only partially constructed -- in the island's main town of Lorengau due to fears of being attacked by locals.

Thomas said these concerns should be allayed due to increased security measures at the new facilities.

"Refugees and non-refugees should no longer have any security concerns," he said in a statement.

While voluntary relocation "remains the government's preference," it "will not shirk its responsibilities," Thomas said.

PNG's High Court ruled last year that the Manus center, first opened in 2001, was illegal and the camp closed on Oct. 31, when security staff withdrew.

Australia's controversial offshore detention program sees asylum seekers that arrive by boat to its shores transferred to camps in PNG and Nauru in the South Pacific, where they are detained.

The United Nations and rights groups have for years cited human rights abuses among detainees in the centers.

Sunday, Australia turned down an offer by New Zealand to take 150 asylum seekers being held in the camp.

The relocation of the men to other facilities on Manus Island is designed to afford the United States time to complete vetting of refugees as part of a refugee swap deal that Australia hopes will see it no longer responsible for the detention of nearly 1,400 asylum seekers who have been classified as refugees.

Those not accepted by the U.S. would likely be resettled in Papua New Guinea or in another developing country, dashing hopes of coming to Australia.