Trump kicks off Asia tour with focus on North Korea 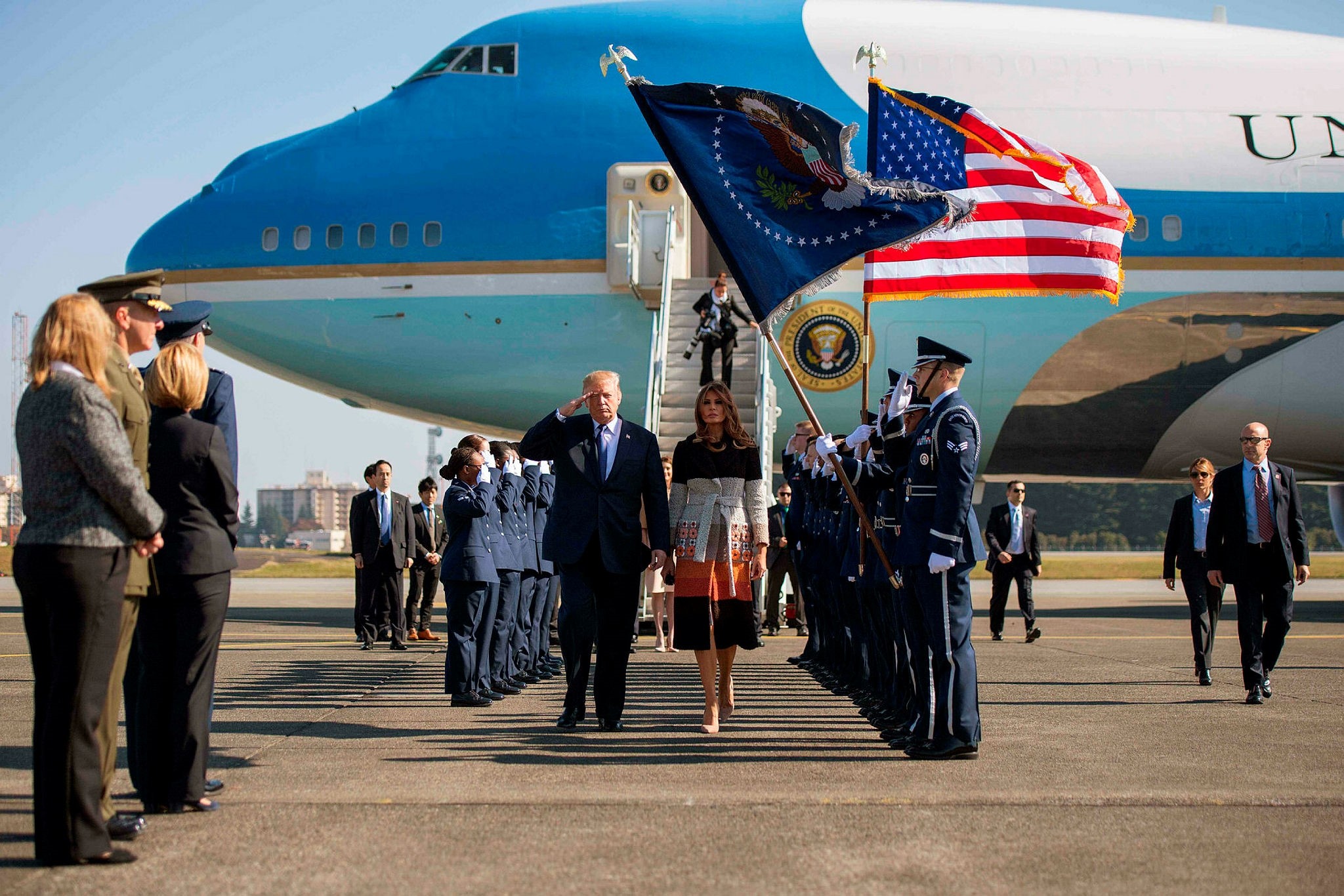 U.S. President Donald Trump and first lady Melania Trump walk through an honor cordon as they arrive at Yokota Air Base at Fussa, Tokyo, Nov. 5.
by Compiled from Wire Services
Nov 06, 2017 12:00 am

U.S. President Donald Trump arrived in Tokyo yesterday, kicking off his first presidential trip to Asia. The threat from North Korea is set to come high on Trump's agenda in meetings with the region's leaders.

North Korea is a "big problem for our country and for the world, and we want to get it solved," the U.S. president told reporters on Air Force One.

Trump said he expects to meet Russian President Vladimir Putin on the sidelines of the Association of South-East Asian Nations (ASEAN) summit next week. He also did not hesitate to call for Russia's assistance on the matter.

"We want [Vladimir] Putin's help" to deal with Pyongyang, he said.

He spoke to U.S. troops after Air Force One touched down at Yokota Air Base in Tokyo in the morning, following an eight-hour flight from Hawaii.

Wearing a bomber jacket that had just been gifted to him on stage, the Commander in Chief told U.S. service members that, "You, – our brave warriors – are the last bulwark against threats to the dreams of people in America and Japan, and all across the world."

Without mentioning North Korea by name, the president also warned, "No one, no dictator, no regime and no nation should underestimate, ever, American resolve."

Meanwhile, Trump reaffirmed the importance of the U.S.-Japan relations, saying, "Japan is a treasured partner and crucial ally of the United States."

The president also praised efforts by U.S. allies to "renew their commitment to peace through strength."

"For almost 60 years, the military alliance has endured [as] a cornerstone of sovereignty, security and prosperity for our nations, this region and indeed the entire world," he said.

In Yokota Air Base, the Trump also added that he was "honored to be here in the beautiful country, home of the extraordinary people of Japan [...] a treasured partner and crucial ally of the United States and today we thank them for welcoming us and for decades of wonderful friendship between our two nations. Americans have deep respect and admiration for the people of Japan, their amazing culture, their strong spirit and their very proud history."

In the afternoon, the president also played golf with Japanese Prime Minister Shinzo Abe and professional golfer Hideki Matsuyama, who is fourth in the world rankings, at the Kasumigaseki Golf Club, north-west of the capital, a venue for the 2020 Tokyo Olympics.

Trump posted a short video from the golf course on Twitter and called Abe and Matsuyama "two wonderful people."

On the other hand, Abe told reporters he and Trump "had the kind of great conversations one can only have during golf."

"Golf clubs are where we can both relax and share our real feelings, and we took our time having a frank talk about all sorts of difficult topics," the Japanese prime minister said.

The two leaders had played golf together at the president's Florida golf resort when they first met, in Mar-a-Lago last February.

Today, President Trump will hold talks with Prime Minister Abe after he and his wife, first lady Melania Trump, meet Emperor Akihito (son and heir of Hirohito) and Empress Michiko at the Imperial Palace.

Trump and Abe are expected to discuss North Korea's nuclear and missile programs, among other issues. Abe's government fully supports Trump, who has said every option – including a military option – is on the table to deal with Pyongyang.

According to a media report yesterday, President Trump questioned Tokyo's decision not to shoot down North Korean missiles flying over the Japanese isles in the past.

In August and September, North Korea fired ballistic missiles which flew over the northern island of Hokkaido before falling into the Pacific Ocean.

Citing unnamed diplomatic sources, the Kyodo news agency reported that Trump said he could not understand why a country of samurai warriors did not shoot down the missiles, in comments made to leaders from South-East Asian countries either in person or on the phone.

In Tokyo, about 21,000 police officers have been mobilized to ensure security in and around the capital during Trump's visit, the country's National Police Agency said.

Pearl Harbor, Hawaii, was the first stop on Trump's trip on Friday. Over the course of nearly two weeks, he is also set to visit South Korea, China, Vietnam and the Philippines.