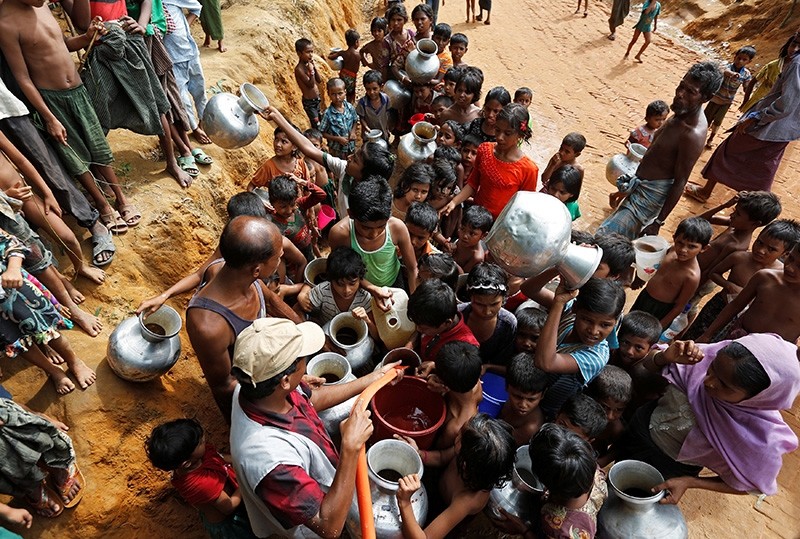 The U.N. Security Council on Monday called on Myanmar to rein in its military campaign in Rakhine state and allow hundreds of thousands of Muslim Rohingya driven from their homes to return.

In a unanimous statement backed by China, the council strongly condemned the violence that has forced more than 600,000 Rohingya to flee across the border to Bangladesh.

The council expressed "grave concern" over human rights violations, "including by the Myanmar security forces" against the Rohingya such as killing, sexual violence and burning of homes and property.

It called on the government "to ensure no further excessive use of military force in Rakhine state, to restore civilian administration and apply the rule of law."

The statement included most of the demands contained in a draft resolution presented last month by Britain and France, but that measure ran into strong opposition from China, a supporter of Myanmar's former ruling junta.

China had indicated it was willing to resort to its veto power to block a resolution, but Beijing finally agreed to a statement during negotiations, diplomats said.

Since late August, more than 600,000 Rohingya have been driven from their homes by an army campaign that the United Nations has described as ethnic cleansing.

Myanmar authorities say the military operation is aimed at rooting out Rohingya militants who staged attacks on police posts.

The Rohingya have faced decades of discrimination in Buddhist-majority Myanmar and have been denied citizenship since 1982, which has effectively rendered them stateless.

Council members called for full access for humanitarian aid workers to Rakhine and said the government must address the root causes of the crisis by allowing "equal access to full citizenship."

The statement did not, however, threaten sanctions.

During negotiations with China, language on citizenship rights was watered down, along with a demand that Myanmar allow a U.N. human rights mission into the country, diplomats said.

The statement calls on Myanmar to cooperate with the United Nations and encourages U.N. Secretary-General Antonio Guterres to appoint a special advisor on the crisis.

France and Britain stressed that the top U.N. body was issuing "demands" to Myanmar and that Guterres would report on progress in 30 days.

Through the statement, "the Security Council expresses a strong and unanimous message to end the ethnic cleansing that is taking place before our eyes in Myanmar," said French Ambassador Francois Delattre.

"We will judge Myanmar on how they act. They have 30 days before the secretary-general will report," said British Deputy U.N. Ambassador Jonathan Allen.

The council statement was clinched as Guterres prepares to travel to Manila this week to join leaders of the Southeast Asian bloc ASEAN for a summit during which the Rohingya crisis will be a top issue.

Rights groups have accused the Security Council of dragging its feet and are calling for sanctions against those involved in the atrocities in Rakhine.

"Going forward, council members should be clear that they won't be held hostage by China's objections, and will instead be driven by the needs of victims and realities on the ground, not what makes China comfortable," said Akshaya Kumar, Human Rights Watch deputy U.N. director.