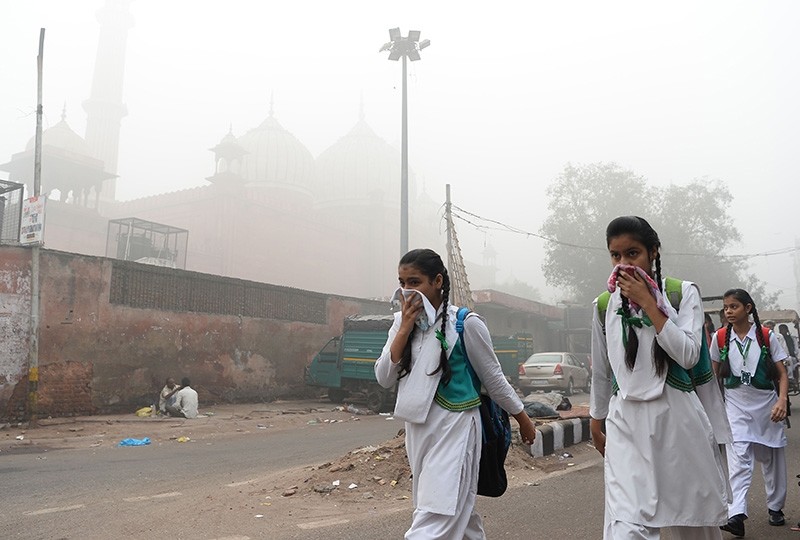 Indian schoolchildren cover their faces as they walk amid heavy smog in New Delhi on November 8, 2017. (AFP Photo)
by Compiled from Wire Services
Nov 08, 2017 12:00 am

Delhi authorities ordered all schools to close Wednesday after choking smog descended on north India and Pakistan, with pollution levels in the city 40 times the World Health Organization's (WHO) safe limit.

Levels of PM 2.5, the microscopic particles that are the most damaging to health, reached more than 1,000 micrograms per cubic meter in the Indian capital Wednesday, according to U.S. embassy measurements, well over triple the threshold of 300 which authorities class as hazardous.

"The moment I stepped out of my home I started coughing and there was a burning sensation in my eyes," said Naresh Yadav, a bank employee, as he walked to work Tuesday in central Delhi.

With Indian doctors warning of a public health emergency, the Delhi government ordered all schools in the city to close until Sunday – citing the threat to the health of an estimated 5 million students in the capital.

Dr. Arvind Kumar said the smog had made the city "unfit for human habitation."

"[With] the kind of toxin levels out there, you are affecting your brain, your heart, your lungs, every part of your body and it is causing irreparable damage," said Kumar, chairman of the Centre for Chest Surgery at the Sri Ganga Ram Hospital in Delhi.

Delhi's air quality typically worsens ahead of the onset of winter as cooler air traps pollutants near the ground, preventing them from dispersing into the atmosphere, a phenomenon known as inversion.

Firecrackers set off to celebrate last month's Diwali festival of lights in the city added to the toxic mix created by pollution from diesel engines, coal-fired power plants and industrial emissions.

The problem is further exacerbated by the burning of crop stubble by farmers after the harvest in north India, a practice that remains commonplace despite an official ban.

A report in the Lancet medical journal last month said pollution had claimed as many as 2.5 million lives in India in 2015, the highest in the world.

Their numbers have quadrupled in recent days, with patients flocking to the facility due to eye problems, respiratory infections and asthma, said Dr. Irshad Hussain.

Authorities in Delhi have closed power plants temporarily and experimented with taking some cars off the road since 2014, when it was named the world's most polluted major city in a WHO survey.

But Delhi's efforts have so far had little effect.

"We knew it was coming, yet nothing was done to avoid a repeat," said Prarthana Borah, India director of the charity Clean Air Asia.

"Unless air pollution is made a priority by the national government nothing will work. It is not about a particular geographic area. This is problem is borderless and affects us all."