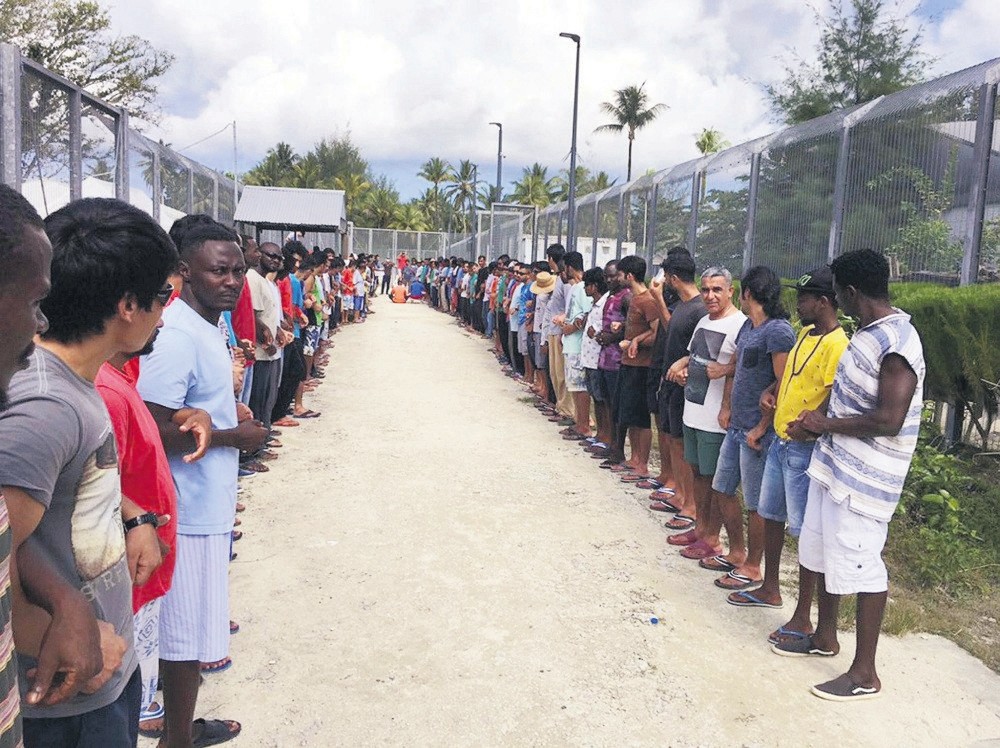 Refugees links hands in solidarity ahead of the center's closure at the Manus Island detention center, Papua New Guinea, Oct. 31.
by Compiled from Wire Services
Nov 10, 2017 12:00 am

Papua New Guinea (PNG) began dismantling a shuttered Australian-run immigration detention center yesterday and warned it will use force if necessary to evict nearly 600 men if they refuse to leave within two days, according to a notice posted at the camp.

"You may become very sick under these conditions of overflowing sewerage, heaps of rubbish, no clean running water, no electricity and no food," Papua New Guinea's Immigration and Citizenship Service Authority said in a two-page notice reviewed by Reuters.

"You are therefore instructed to vacate this compound immediately. ... If necessary, force may be used to relocate those who refuse to move voluntarily for your own sake."

The asylum seekers have barricaded themselves inside the Manus Island center for the past nine days, defying attempts by Australia and Papua New Guinea to close the camp in a standoff the United Nations describes as a "looming humanitarian crisis."

The men fear violent reprisals from the Manus Island community if they move from the camp to three transit centers, pending possible resettlement to the United States. The camp was closed on Oct. 31, and water and power have been cut off.

The men inside the camp, who include asylum seekers from Afghanistan, Iran, Myanmar, Pakistan, Sri Lanka and Syria, said they would continue to defy attempts to shut the camp. Water, power and food supplies have been cut with a Papua New Guinea court on Tuesday rejecting one refugee's application to have them restored. Several of the men told Reuters that nearly 100 of them had fallen sick.

With conditions deteriorating, PNG Prime Minister Peter O'Neill said the holdouts must move to the new accommodation. "The Manus center was established for the sole reason of processing asylum claims. Now all claims have been processed and the center has closed," he said, as reported by AFP.

"Given the Supreme Court's decision, the government has no choice but to intervene for the well-being of both the refugees and non-refugees." He warned that "appropriate means" would be used to "apprehend individuals who are causing unnecessary anxiety and violence."

"Their actions are now heading towards a law-and-order situation, as well as a hygiene and sanitation problem, and it will be dealt with as such, whether they are genuine refugees or not."

Canberra says its tough immigration policy against boat people dissuades would-be migrants from attempting the dangerous crossing to Australia and has therefore prevented hundreds of deaths at sea. However, it has been widely criticized by the United Nations and human rights advocates. Canberra has strongly rejected calls to move the refugees to Australia and instead has tried to resettle them in third countries, including the United States.

But so far, just 54 refugees have been accepted by Washington, with 24 flown to the United States in September under a deal struck with former U.S. president Barack Obama and bitterly criticized by his successor Donald Trump.

Amnesty International warned, "Any use of force in this highly charged environment is likely to lead to serious injury or loss of life," calling for aid to be allowed into the camp.