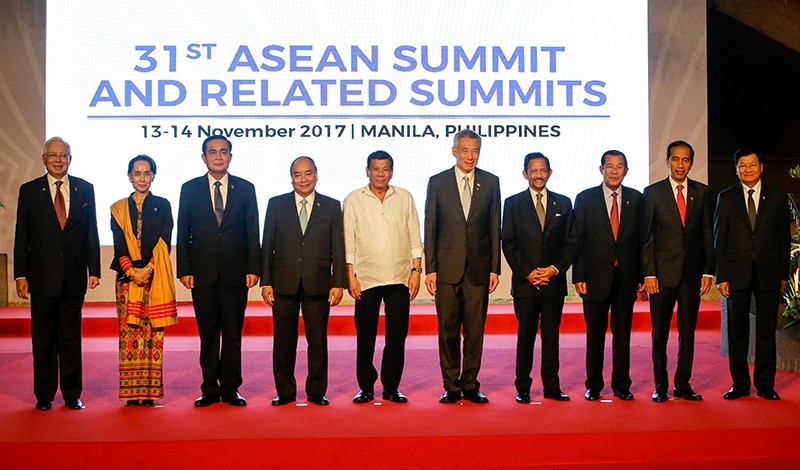 Leaders of the member states of the Association of Southeast Asian Nations (ASEAN) smile during a family photo before the opening session of the 31st Summit, Manila, Philippines, Nov. 13, 2017. (EPA Photo)
by Compiled from Wire Services Nov 13, 2017 12:00 am

A draft of the statement to be issued after a Southeast Asian summit makes no mention of the exodus of Rohingya Muslims from Myanmar's Rakhine state following a military crackdown that has been described by the United Nations as ethnic cleansing.

One paragraph of the communique, seen by Reuters on Monday, mentions the importance of humanitarian relief provided for victims of natural disasters in Vietnam and a recent urban battle with Islamist militants in the Philippines, as well as "affected communities" in northern Rakhine state.

The statement was drawn up by the Philippines, current chair of the 10-member Association of Southeast Asian Nations (ASEAN) - which includes Myanmar - whose leaders met for a plenary session in Manila on Monday.

The draft did not give any details of the situation in northern Rakhine or use the term Rohingya for the persecuted Muslim minority, which Myanmar leader Aung San Suu Kyi has asked foreign leaders to avoid.

The government in mostly-Buddhist Myanmar regards the Rohingya as illegal migrants from Bangladesh and does not recognise the term.

Well over 600,000 Rohingya have fled to Bangladesh to find shelter in refugee camps after military clearance operations were launched in response to attacks by Rohingya militants on security posts on Aug. 25.

The plight of the Rohingya has brought outrage from around the world and there have been calls for democracy champion Suu Kyi to be stripped of the Nobel peace prize she won in 1991 because she has not condemned the Myanmar military's actions.

Some members of ASEAN, particularly Muslim-majority Malaysia, have voiced concern. However, in keeping with ASEAN's principle of non-interference in the internal affairs of one another, the issue appears to have been put aside at the summit.

In September, Malaysia disavowed a statement issued by the Philippines on behalf of ASEAN's foreign ministers as misrepresenting "the reality" because it did not identify the Rohingya as an affected community in Rakhine state.

"ASEAN summits are not designed to actually construct policy responses to major human rights issues that affect the whole region," said David Mathieson, a former human rights researcher who is now an independent analyst based in Myanmar. "Right now, Suu Kyi's government is benefiting from ASEAN's culture of inaction."

Suu Kyi, who did not mention the crisis in a speech after arriving in Manila on Sunday, criticized ASEAN's principle of non-interference herself in 1999 when she was fighting for democracy in a country then ruled by a military junta.

"This policy of non-interference is just an excuse for not helping," she wrote in an opinion column in the Thai daily the Nation at the time. "In this day and age, you cannot avoid interference in the matters of other countries."

Khin Zaw Win, a Yangon-based political analyst, said that both Myanmar's previous military junta and Suu Kyi's government have benefited from ASEAN's reticence, but that the bloc should "take a firmer position" on the Rohingya issue.

"It has to be taken up if ASEAN is to remain credible," he said.

Roberto Romulo, a former Philippine foreign minister, told the Philippine news channel ANC that there appeared to be no discussion about the Rohingya at the ASEAN summit.

"They're treating with a great deal of respect a discredited Nobel Peace Prize winner like Aung San Suu Kyi," he said.

Amnesty International Philippines representative Wilnor Papa told ANC that the ASEAN leaders would talk about "terrorism and peace and order ... but there are a whole lot of elephants in the room they won't be talking about, that people are trying to ignore."