18 people dead, 21 others injured after 30 vehicles collide in China due to heavy fog 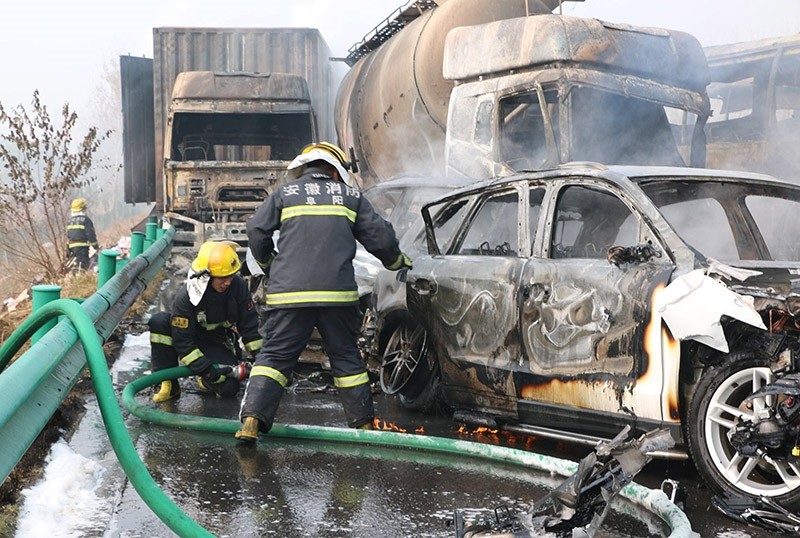 Firemen work at the site of an accident on an expressway in Fuyang in central China's Anhui province, 15 November 2017. (EPA Photo)
by Compiled from Wire Services
Nov 15, 2017 12:00 am

More than 30 vehicles crashed in the fog around 7:45 am (2345 GMT Tuesday) in eastern Anhui province, traffic police said, according to Xinhua news agency.

Grisly footage from the aftermath in the city of Fuyang in Anhui province showed sedans violently crushed to around half their original size under large cargo trucks and blood stains on vehicle doors as the sound of people crying could be heard.

Police said another 21 people were injured including 11 severely in the latest horrific tragedy to strike China's accident-prone highways.

Officers said the brutal mash-up was caused by low visibility due to "fog", but China's notorious air pollution may have also played a role.

The Fuyang government had issued a heavy pollution alert for the area, advising residents to minimize outdoor activities.

The accident caused several of the vehicles to catch fire in a blaze that raged for more than two hours and left several cars completely charred.

More than 20 fire trucks were dispatched to the scene.

Video of the aftermath on Chinese news websites showed one shocked-looking man sitting on the road next to a car while a dead body lay just a few metres (yards) away.

Deadly road accidents are common in China, where traffic regulations are often flouted or go unenforced.

Violations of traffic laws were blamed for nearly 90 percent of accidents that caused deaths or injuries that year.

In August, at least 36 people were killed and 13 injured when a bus slammed into a wall at the mouth of an expressway tunnel in northern China, authorities said.