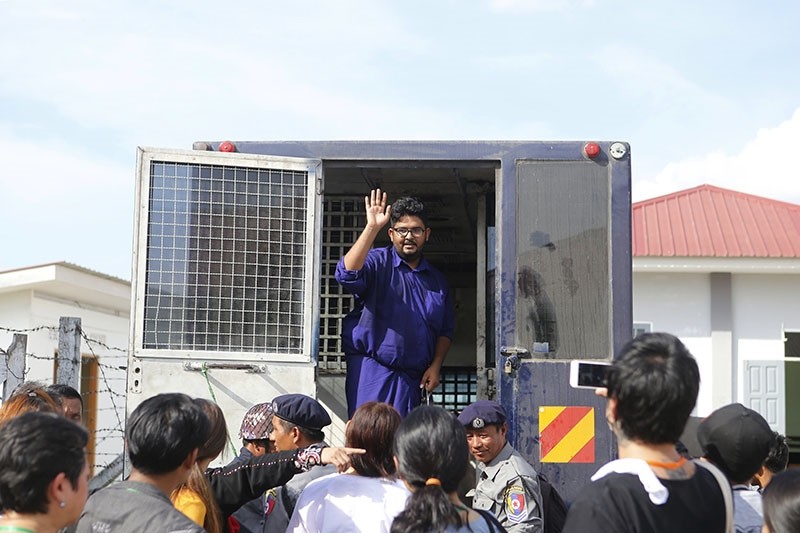 Myanmar freelance journalist Aung Naing Soe waves to his family from a prison van as he leaves after a hearing on his trial at Zabu Thiri Court in Naypyitaw, Myanmar, Nov. 16, 2017. (EPA Photo)
by Daily Sabah with DPA
Nov 16, 2017 12:00 am

A Myanmar court yesterday adjourned until next week the trial of three journalists on assignment for Turkey's public broadcaster TRT World after it jailed them for violating an aircraft law by filming with a drone, according to their lawyer.

Two journalists working for the English-language TV station, Lau Hon Meng from Singapore and Mok Choy Lin from Malaysia, were detained last month when they attempted to fly a drone near Myanmar's parliament.

They are also accused of violating the country's Import and Export Law, which carries a penalty of up to three years in jail.

"The judge adjourned the case until Monday, when we hope all the charges will be thrown out when we argue the case," Khin Maung Zaw, a lawyer for three of the accused, told dpa on Thursday.

A number of journalists have been arrested in Myanmar this year - often under draconian colonial-era laws - and rights groups have warned of a backsliding in press freedom.

In a statement released on Oct. 31, TRT World said that Myanmar authorities were informed about its crew's filming plans. "Our crew wanted to film the parliament building in the capital with a drone after conducting an interview with a member of parliament. They were detained by security officials before flying the drone," the TRT World statement said. "Mok Choy Lin and Lau Hon Meng arrived in Yangon on Oct. 21 with journalist visas issued by the Myanmar government. They shot in various locations with conventional cameras as well as with a drone up until Oct. 27. The Myanmar Information Ministry was previously informed about all of the filming activities and the filming schedule," the statement on the broadcaster's website said.