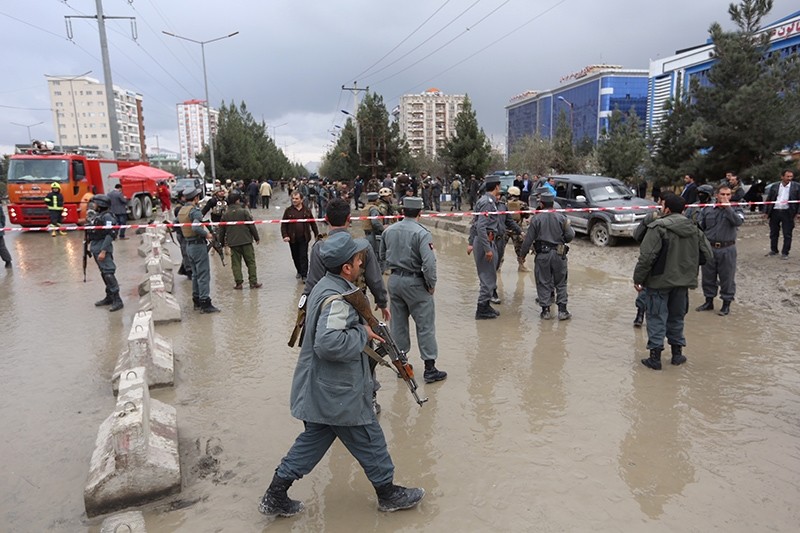 Afghan secuirty forces are seen at the site of an explosion near a gathering of supporters of regional leader Atta Mohammad Noor, in Kabul, Afghanistan, Nov. 16, 2017. (AP Photo)
by Compiled from Wire Services Nov 16, 2017 12:00 am

A suicide attacker blew himself up outside a wedding hall in Kabul killing at least nine people, officials said Thursday, in an apparent attempt to strike a political gathering under way inside.

There was no immediate claim of responsibility for the attack, the latest to hit the war-weary Afghan capital where insurgents have been stepping up assaults in a show of deadly force.

Supporters of Atta Mohammad Noor, the powerful governor of the northern province of Balkh and vocal critic of Afghan President Ashraf Ghani, had been holding an event inside the hall at the time of the blast. He is also the leader of the mainly ethnic Tajik Jamiat-i-Islami party.

The explosion was the latest in a wave of violence in Afghanistan that has killed and wounded thousands of civilians this year.

A spokesman for the interior ministry said the suicide bomber approached a hotel hosting the gathering in the Khair Khana district of Kabul, on foot. The dead included five policemen and two civilians, and many more were wounded.

The bomber tried to get into the building but was stopped at the security checkpoint where he detonated his device, Kabul police spokesman Abdul Basir Mujahid told French Press Agency (AFP).

"A number of our police personnel are among the casualties," Mujahid added.

"The bomber detonated himself after he was identified by the police at the entrance gate," Danish said.

Another nine were wounded including seven police and two civilians, Danish added.

Noor was not at the event, one of his aides told AFP.

"After lunch as we were exiting the hall a huge explosion shook the hall, shattering glass and causing chaos and panic," Harun Mutaref, who was at the gathering, told AFP.

"I saw many bodies including police and civilians lying in blood."

An AFP photographer said the windows of the wedding hall had been shattered by the force of the blast and a vehicle parked outside was on fire.

Dozens of police and intelligence officers have swarmed the area and blocked access to the public.

Photos posted on Twitter showed multiple bodies of men lying on top of each other in a muddy street and in a drain, and people dragging away the wounded.

He has previously hinted that he may run in the 2019 presidential election.

Noor has recently called for the return of Vice President Abdul Rashid Dostum, who fled to Turkey in May after he was accused of raping and torturing a political rival in 2016.

Earlier this year Noor met with Deputy Chief Executive Mohammad Mohaqiq, a senior figure in the mainly Shiite Hazara ethnic community, and Dostum in Turkey to form the "Coalition for the Salvation of Afghanistan".