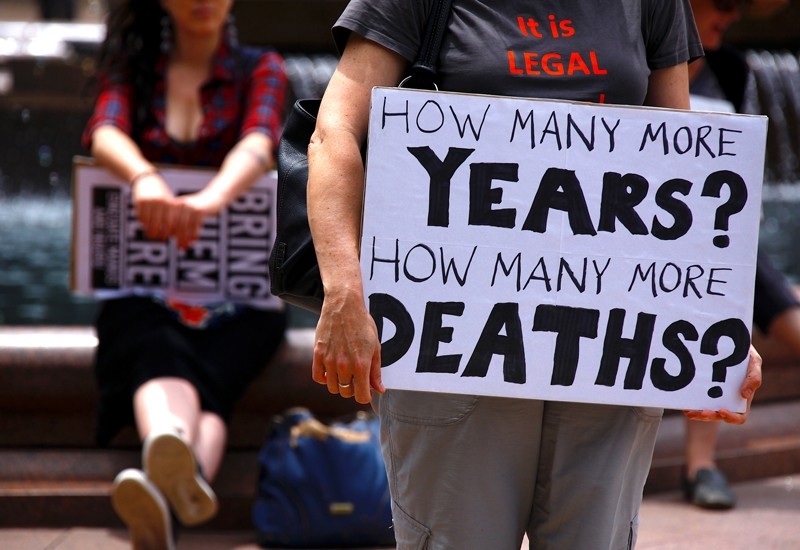 Refugee advocates hold placards as they participate in a protest in Sydney, Australia, against the treatment of asylum-seekers at Australia-run detention centres located at Nauru and Manus Island, Nov.18, 2017 ( Reuters Photo)
by Nov 18, 2017 12:00 am

Australia's main medical association called on Saturday for the government to allow independent doctors and other health experts to help more than 400 asylum seekers languishing inside a recently closed detention centre in Papua New Guinea.

The asylum seekers have shut themselves inside the Australian-run Manus Island Centre for the past 18 days, defying attempts by Australia and Papua New Guinea (PNG) to close it in a standoff the United Nations describes as a "looming humanitarian crisis".

Australia has shut access to the centre, and staff, including doctors, have left, leaving the men without sufficient food, clean water, power or medical care.

Members of the Australian Medical Association (AMA) voted unanimously on Saturday to call on the government to grant access to the centre so doctors could assess the men's health, wellbeing and living conditions.

"The AMA has made many representations on this matter, both publicly and in private but, with a worsening and more dangerous situation emerging on Manus, the federal council strongly believes that urgent action and answers are needed," AMA President Michael Gannon said.

"It is our responsibility as a nation with a strong human rights record to ensure that we look after the health and wellbeing of these men, and provide them with safe and hygienic living conditions."

Australia's "sovereign borders" immigration policy, under which it refuses to allow asylum seekers arriving by boat to reach its shores, has been heavily criticised by the United Nations and human rights groups but has bipartisan political support in Australia.

The 421 asylum seekers on Manus island say they fear violent reprisals from the community if they move to transit centres, pending possible resettlement to the United States.

Sudanese refugee Abdul Aziz said via text message on Saturday that PNG officials had started to dismantle the centre's perimeter fences and food was running low.

"We are waiting drinking from the rainwater ... it's tense feeling, we don't have any idea what PNG will do to us. Their attitude toward us they are really aggressive," Aziz said.

PNG's Supreme Court ruled last year that the centre breached its laws and fundamental human rights, leading to the decision to close it.

New Zealand has offered to accept 150 of the men, but Australia has declined the offer saying the priority was an existing refugee swap deal negotiated with former U.S. President Barack Obama last year.

Under that deal, up to 1,250 asylum seekers could be sent to the United States and Australia will in turn accept refugees from Central America.