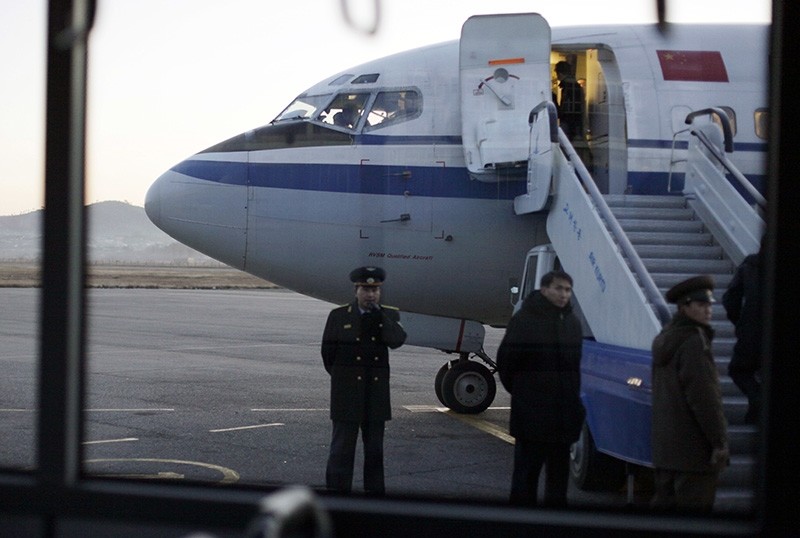 In this file photo taken Monday, Dec. 19, 2011, North Korean officials wait for passengers to board an Air China flight at Pyongyang airport in Pyongyang, North Korea (AP Photo)
by Associated Press Nov 21, 2017 12:00 am

State-owned airline Air China suspended flights Tuesday between Beijing and North Korea due to a lack of demand, deepening the North's isolation amid mounting U.N. sanctions over its nuclear and missile programs.

The move followed U.S. President Donald Trump's decision to add Pyongyang to a list of governments that support terrorism but there was no indication that prompted Air China's decision. A Chinese foreign ministry spokesman said he had no information.

Beijing has supported U.N. curbs on North Korean exports meant to pressure the government of leader Kim Jong Un to drop its pursuit of nuclear and missile technology but has argued against measures that might harm the country's public.

Flights were "temporarily suspended due to unsatisfactory business operations," said an employee of Air China's press office who would give only his surname, Zhang.

A foreign ministry spokesman, Lu Kang, said he hadn't heard about Air China's cancellation. He said such decisions would be made based on the "state of operation and the market."

Airlines have steadily reduced the frequency of flights to North Korea as mounting political tensions depressed the already small number of business travelers and tourists visiting the North.

Air China Ltd. announced in April it was cutting the frequency of flights to North Korea due to lack of demand. Some other Chinese carriers offered charter services to the North but those also have been canceled.

Zhang said the last Air China flight to Pyongyang was Monday and he didn't know when service might resume.

The status of Air Koryo's flights was unclear. Phone calls to the carrier's Beijing office weren't answered. The flight information website for the Beijing airport showed its Pyongyang flight on Tuesday took off as scheduled.

Lu, the foreign ministry spokesman, appealed for measures to ease the tense standoff.

"Given the highly complex and sensitive situation on the peninsula, we hope all relevant parties can do something conducive to alleviating the tension and pulling all sides concerned back to the track of negotiation and dialogue to settle the peninsular nuclear issue," he said at a regular news briefing.