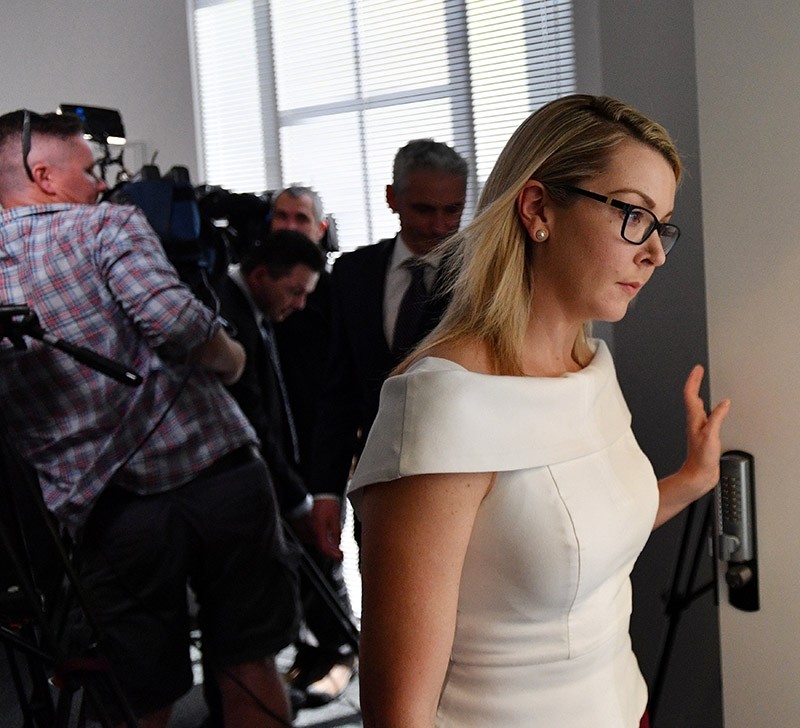 Nick Xenophon Team (NXT) Senator Skye Kakoschke-Moore leaves after announcing her resignation at a NEWs conference at her office in Adelaide, November 22, 2017. (Reuters Photo)
by Compiled from Wire Services Nov 22, 2017 12:00 am

A ninth Australian lawmaker quit parliament on Wednesday after discovering she was a dual national, the latest casualty in a widening constitutional crisis that has already cost the government its majority.

The resignation of Skye Kakoschke-Moore, one of three senators in the center-right Nick Xenophon Team, over the surprise revelation that she was a British citizen by descent, does not affect the government's position in the upper house.

"Their advice was extremely surprising to me," Kakoschke-Moore told reporters in Adelaide, after having learnt from Britain's Home Office that her mother's birth in then-colonial Singapore in 1957 made her British by descent.

Australia is rare if not unique in the world in banning dual nationals from sitting in Parliament. Pressure is growing to reform the constitution amid the growing uncertainty over how many by-elections might result from the current crisis and which party might end up forming a government.

The House of Representatives is expected to also set a deadline for its lawmakers to prove they are solely Australian when it next sits in two weeks.

Any lawmakers who remain under a cloud after declaring their citizenship status would be referred to the High Court to decide whether they were legally elected. A series of by-elections that could change the government could be scheduled for a single weekend early next year.

The High Court last month disqualified Deputy Prime Minister Barnaby Joyce because he had inherited the citizenship of his New Zealand-born father. He immediately renounced his New Zealand citizenship and will contest his seat Dec. 2. Government lawmaker John Alexander later resigned after discovering he was British but will stand for re-election on Dec. 16, having renounced the second nationality that he inherited from his father.

The dual citizenship ban was a rare issue until recently, but the High Court last month disqualified five lawmakers, including Joyce, in a rejection of the government's argument that ignorance of an inherited nationality was an acceptable excuse.

Senators are usually replaced from the same party without elections, but most crucial are the fates of lawmakers in the House of Representatives, where parties need a majority to form a government.

Before losing two seats, the government held a single-seat majority of 76 in the 150-seat chamber.

Many argue that the dual citizen ban is increasingly inappropriate for a migrant nation where half the population was born overseas or has an immigrant parent. But changing the constitution requires all registered voters to cast ballots in a referendum, which rarely succeed.