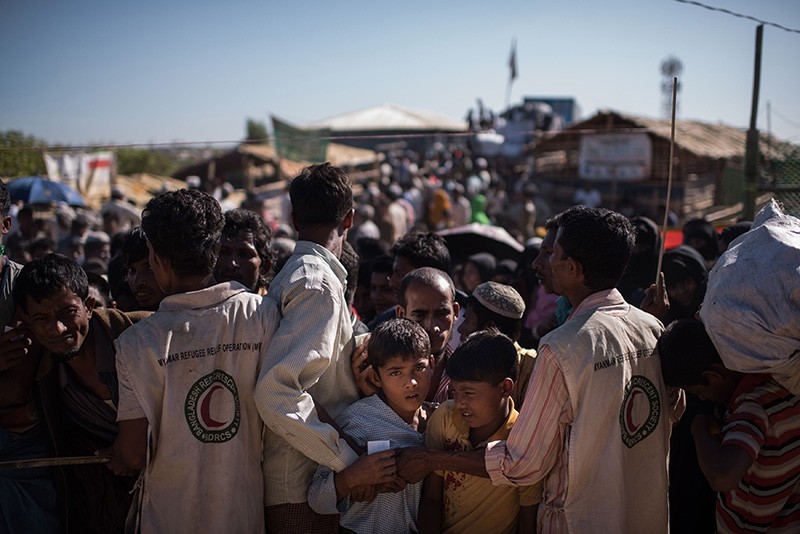 Amnesty International is calling for a "strong resolution" over Myanmar's persecution of its Rohingya Muslim minority, as the country enters the spotlight of a rare U.N. Human Rights Council special session later Tuesday.

Myanmar's military is accused by the U.N. and U.S. for committing ethnic cleansing against the Rohingya in northern Rakhine state.

An army-led crackdown has forced some 620,000 people to flee over the border into squalid camps in Bangladesh in recent months, leaving hundreds of villages burned to the ground.

Ahead of the council's session in Geneva, Amnesty urged members to keep the pressure on and said authorities in Buddhist-majority Myanmar are committing crimes against humanity that are continuing on a "daily basis."

"The Council must now step up and pass a strong resolution that sends a clear message to Myanmar's government and military that their abhorrent treatment of the Rohingya must end immediately, and that perpetrators will not enjoy impunity," said James Gomez, Amnesty's regional director for Southeast Asia and the Pacific.

The army has justified the crackdown as a proportionate response to deadly attacks by Rohingya militants on border police on Aug. 25.

Myanmar's state-backed Global New Light of Myanmar on Tuesday claimed there had been a "gradual return to normalcy in the region."

The rights council rarely holds special sessions, which can only be convened at the request of at least a third of its 47 member states, or 16 countries.

The session comes amid mounting scrutiny from U.N. member states. In March the rights council approved a mission to Myanmar to investigate alleged crimes by security forces, particularly in Rakhine.

Myanmar refused to cooperate and blocked access to the team of investigators, who have begun their work outside the country.

After months of wrangling, Myanmar and Bangladesh signed a deal on Nov. 23 to start repatriating refugees within two months. But rights groups say the conditions are not in place to ensure safe, voluntary and dignified returns.

Amnesty is also urging the rights council to discuss "wide-ranging human rights violations" it says are being committed by Myanmar's security forces against other ethnic minorities.

Many of the country's borderlands are embroiled in long-running conflicts, in which allegations of extrajudicial executions, disappearances, torture and forced labor are common.

"The Council's resolution must reflect this and call on Myanmar to immediately end human rights violations against minorities in all parts of the country," said Amnesty's Gomez in a statement.