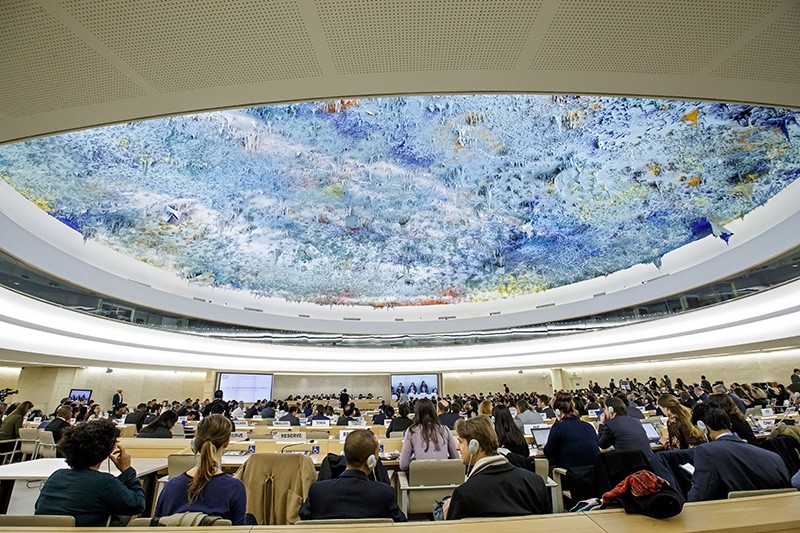 Myanmar should let investigators into the country to probe alleged atrocities against the Rohingya minority, the UN Human Rights Council demanded Tuesday, as the UN rights chief said that the violations could amount to genocide.

In a resolution, the UN body in Geneva "strongly condemns the alleged systematic and gross violations" against the Muslim minority, including killings, rapes and planting of landmines.

"Deeply concerned by the current climate of non-cooperation with United Nations," the council said Myanmar should give free access to a UN fact-finding mission, as well as to humanitarian organizations.

The government of the Buddhist-majority country should not only carry out its plan to repatriate the Rohingya who have fled to Bangladesh, but it should also grant citizenship to the largely stateless and marginalized group.

The resolution passed with the votes of 33 countries. China, Burundi and the Philippines voted against it, while nine countries abstained.

At the special Human Rights Council session on the Rohingya crisis, UN rights chief Zeid Ra'ad Al Hussein said security forces have been involved in burning people in their homes, murdering children and adults, widespread rape of women and girls, and torching of schools and mosques.

Zeid slammed "widespread, systematic and shockingly brutal" attacks against the Rohingya, as well as policies that had dehumanized and segregated the minority, and left it wallowing in statelessness for decades.

Myanmar's ambassador to the UN in Geneva, Htin Lynn, slammed the resolution adopted Tuesday, decrying it as "unethical and unprofessional" and as "infringing on the state sovereignty of Myanmar."

The resolution calls on Myanmar to "address the root causes" of the Rohingya crisis, and to fully cooperate with the different UN bodies, providing full access to investigators and humanitarian workers.

It also asked Zeid's office to track progress in the country and to provide regular updates to the council and submit a full report by March 2019.

"Today the UN's top human rights body has sent the strong message to the government that the world will not turn away, it will not avert its gaze, it will not forget," Laila Matar of Human Rights Watch said in a statement.

But the text did not go as far as Zeid had hoped.

He had urged the council to ask the UN General Assembly to launch a new "impartial and independent mechanism", to work alongside a fact-finding mission already dispatched by his office.

In March the rights council approved the fact-finding mission to investigate alleged crimes by security forces, particularly in Rakhine.

But Myanmar has refused to cooperate and has blocked access to the team of investigators, who have begun their work outside the country.

Htin Lynn on Tuesday said that the country's position towards the fact-finding mission "remains unchanged".

Bangladesh, which along with Saudi Arabia had requested the special session, meanwhile voiced disappointment that Tuesday's resolution was not adopted by consensus, given the severity of the crisis.

Bangladeshi Foreign Minister Shahriar Alam warned that the massive exodus over such a short period was "comparable only with the exodus following the 1994 Rwanda genocide".

After months of wrangling, Myanmar and Bangladesh signed a deal on November 23 to start repatriating refugees within two months. But rights groups say the conditions are not in place to ensure safe, voluntary and dignified returns.

According to the UN's top expert on the situation in Myanmar, Yanghee Lee, Myanmar authorities appear to have already started building camps for returnees, raising serious concerns about the conditions the Rohingya would return to.

Comments from the top UN representative on sexual violence, Pramila Patten, also painted a harrowing picture of the dangers faced by the minority inside Myanmar.

She warned that rampant sexual attacks on Rohingya appeared to be "used as a tool of dehumanization and collective punishment," citing witness accounts of women and girls tied to rocks or trees "before multiple soldiers literally raped them to death."

Myanmar's civilian leader Aung San Suu Kyi has been the target of global vitriol for a perceived failure to stand up for the stateless minority.

But she remains a heroine for most of her compatriots, who largely consider the Rohingya as unwanted illegal immigrants from Bangladesh.

Zeid meanwhile lamented the refusal inside Myanmar, but also by some international players to even name the Rohingyas, creating "a shameful paradox: they are denied a name, while being targeted for being who they are."