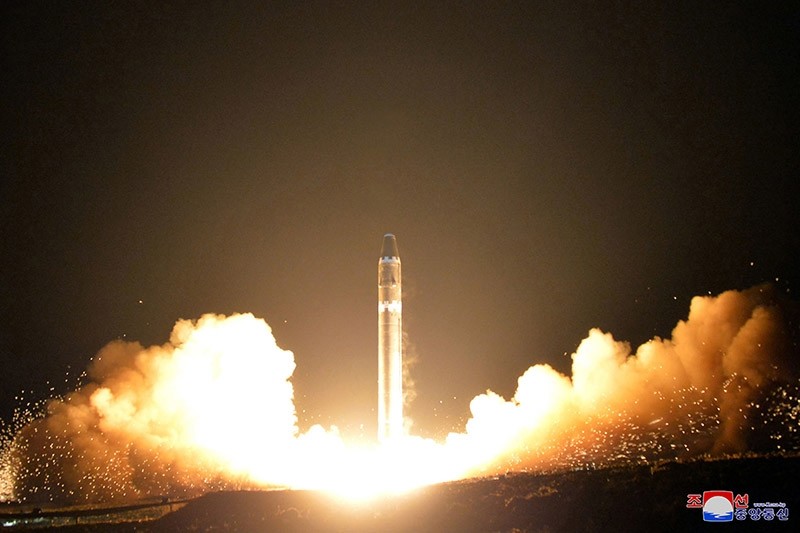 The North has conducted a flurry of missile tests this year in defiance of repeated international protests, including from aviation authorities.

"A Korean Air jet flying to Incheon from San Francisco reported to Japanese controllers that its flight crew saw a flash from what was believed to be the North Korean missile," a Korean Air spokesman told AFP.

A South Korean transportation ministry official, who wanted to remain unnamed, said the flight paths of both Korean airlines were some 220 kilometers (140 miles) away from where the missile landed.

"In the clean dark sky, you can see flashes from a missile from that long distance," he told AFP.

'A bright flame falling down'

A Japan Airlines spokesman said the cockpit crew of one of its airliners, flying from Tokyo to London, "saw a bright flame falling down" over the sea of Japan.

The reports from South Korea and Japan come after Hong Kong carrier Cathay Pacific said Monday that the crew of its flight from San Francisco to Hong Kong saw "what is suspected to be the re-entry" of the North Korean missile.

Cathay said there was no current plan to change air routes, saying its plane was "far from the event location".

In a message shared with staff, Cathay general manager Mark Hoey said the crew had described seeing the missile "blow up and fall apart", the South China Morning Post reported.

David C. Wright, a senior scientist at the Union of Concerned Scientists, wrote in a report Tuesday that the Cathay crew most likely had seen the missile's first stage burn out and fall back to earth.

"Ignition of the second stage rocket engine and separation of the first stage may have looked like an explosion that caused the missile to fall apart," he wrote.

Wright also said the "flash" seen by Korean pilots about an hour after the missile's launch would be consistent with the warhead heating up during reentry, since the missile flew for 53 to 54 minutes.

South Korean authorities said they warned airlines of a possible missile test a day before the launch based on intelligence reports, the transportation ministry official said.