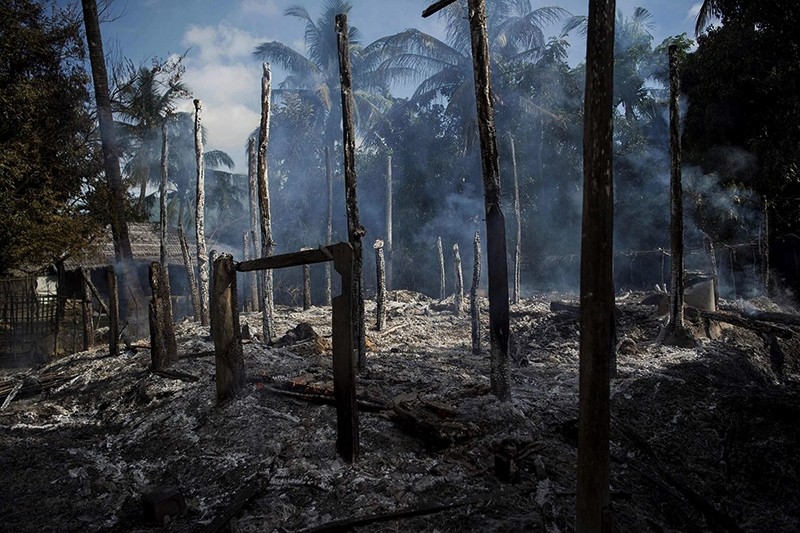 Life has stopped in its tracks in Myanmar's northern Rakhine state where an estimated 180,000 Rohingya remain, fearful after violence drove 650,000 to flee to Bangladesh, the International Committee of the Red Cross said on Wednesday.

Dominik Stillhart, ICRC director of operations, speaking after a three-day mission to the remote area, said continuing tensions in the Muslim and dominant Buddhist communities were preventing Muslim traders from reopening shops and markets.

The ICRC is one of the only aid agencies to operate in northern Rakhine after Myanmar's military waged a campaign the United Nations has called "ethnic cleansing" in response to Aug. 25 attacks by Rohingya militants on security posts.

"The situation in the northern Rakhine has definitely stabilized, there are very sporadic incidents, but tensions are huge between the communities," Stillhart told reporters.

"You get a sense, especially of the two main communities being deeply scared of each other. What surprised me is the fact that not only the Muslim communities are scared, but that the others are actually scared as well," he said.

Stillhart went to Maungdaw, Buthidaung and Rathedaung in northern Rakhine, where the ICRC is providing food, water and other aid 150,000 people. By year-end, it hopes to reach all of the 180,000 Rohingya it estimates remain in the "politically-sensitive" region, among 300,000 throughout Rakhine, he said.

"You travel through the countryside and you really see on both sides of the road, villages that are completely destroyed. It just gives you a bit of a sense of the scale of destruction. There is also this pervasive sense of absence.

"It is as if life has stopped in its tracks, people do not move, markets are closed in Muangdaw town," Stillhart said.

"The main problem for the Muslim communities today is not that they are being attacked, or that there are incidents," Stillhart said.

Rather it is fear and uncertainty, and "the very limited possibilities for them to access their own livelihoods like fields, and especially markets and services", he said.

Myanmar and Bangladesh signed an agreement last month for the voluntary repatriation of hundreds of thousands of Rohingya within several months.

The returns must be voluntary and safe, Stillhart said.

"But for now we really don't see a significant return movement and I'm also not expecting that we will see massive return anytime soon," he said. About 300 Muslims still flee daily, he added, citing U.N. figures.

The ICRC visits detainees held in Rakhine, including Rohingya arrested since Aug 25, he said.

"So it's not as if we met like hundreds or thousands of people rounded up in these detention centres."

Since Aug. 25, an estimated 613,000 Rohingya have crossed from Myanmar's western state of Rakhine into Bangladesh, according to the U.N.

In a recent report, U.N. investigators said such violations may have constituted to crimes against humanity.