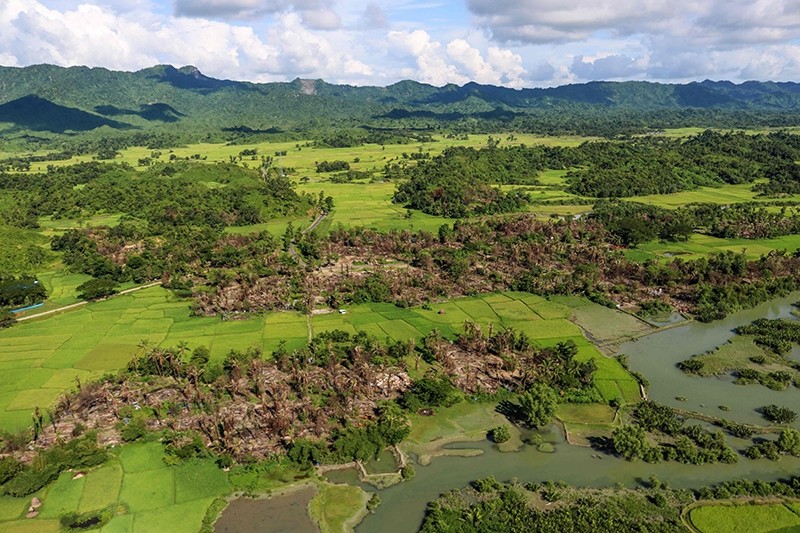 This file photo shows the remains of burnt villages near Maungdaw in Northern Rakhine State (AFP File Photo)
by Dec 19, 2017 12:00 am

Myanmar's army says it is investigating a mass grave found in a village in northern Rakhine state, a region where the U.N. has accused troops of committing atrocities against Rohingya Muslims.

Northern Rakhine has been nearly emptied of its Muslim population since late August, when an army crackdown on Rohingya rebels sent more than 655,000 refugees fleeing across the border to Bangladesh.

The U.N., U.S. and rights groups have accused Myanmar of carrying out a systematic ethnic cleansing campaign against the stateless Muslim minority, with Doctors Without Borders estimating that at least 6,700 Rohingya were killed in the first month of violence.

On Tuesday Human Rights Watch released a report detailing the army's "systematic killings and rape" of hundreds of Rohingya in Tula Toli village in northern Rakhine on Aug. 30, adding new testimony to an event that has been documented by journalists and rights groups based on accounts from refugees.

But Myanmar's army has denied all allegations of abuse -- while severely curtailing access to the conflict zone in northern Rakhine.

A statement posted on the army chief's Facebook page late Monday said a tipoff led officers to "unidentified dead bodies found at a cemetery in Inn Dinn village," a community in Rakhine's Maungdaw township -- the epicenter of the violence.

It did not specify how many corpses were found or what community they belong to.

"Strong legal action will be taken if any member of security forces are involved," the statement added.

The military has vehemently defended its crackdown as a targeted effort to flush out Rohingya militants who attacked police posts on Aug. 25, killing around a dozen officials.

Tens of thousands of ethnic Rakhine Buddhists, Hindus and other minorities were internally displaced by the violence, though many have since returned home.

On Monday U.N. rights chief Zeid Ra'ad Al Hussein told AFP that the army crackdown could possibly amount to "genocide" of the Rohingya.

"For us, it was clear... that these operations were organized and planned," he said in an interview.

"You couldn't exclude the possibility of acts of genocide.... You cannot rule it out as having taken place or taking place."