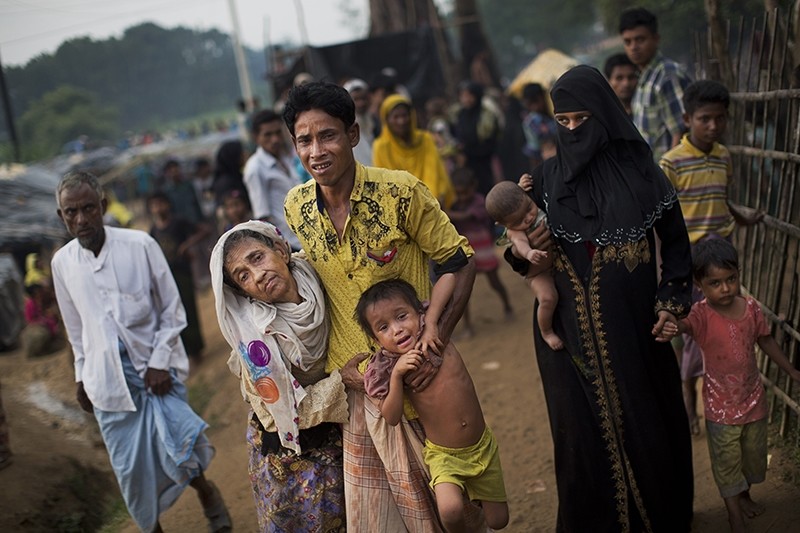 In this file photo, an exhausted Rohingya helps an elderly family member and a child as they arrive at Kutupalong refugee camp after crossing from Myanmmar (AP Photo)
by Associated Press Dec 24, 2017 12:00 am

After facing international outrage and charges of ethnic cleansing, Myanmar made a pledge: Rohingya Muslims who fled the country by the hundreds of thousands would start their journey home within weeks.

With so many obstacles, however, and no real sign of good will, few believe that will happen.

The returns are supposed to be voluntary. But many members of the religious minority, now living in sprawling refugee camps in neighboring Bangladesh, are afraid to go back.

They don't trust the nationalist-led government and feel widely hated by the general population. Meanwhile, the military — which violently ousted them — says the refugees shouldn't expect to return in large numbers.

Myanmar, a predominantly Buddhist nation of 60 million, was basking in international praise just a few years ago as it transitioned to democracy after a half-century of dictatorship. Since then, a campaign of killings, rape and arson attacks by security forces and Buddhist-aligned mobs have sent more than 850,000 of the country's 1.3 million Rohingya fleeing.

Their home for generations, the northern tip of Rakhine state, is now virtually empty, prompting the United Nations, the United States and others to label it ethnic cleansing.

In an apparent effort to quiet criticism, Myanmar reached an agreement with Bangladesh last month saying refugees would start returning home before Jan. 23.

There is "no way" that will happen, says Chris Lewa, a leading expert on the Rohingya and the policies that have made them one of the world's most persecuted minorities. The government, she notes, has done almost nothing to prepare.

While Myanmar said the Rohingya would be allowed to settle in their original homes, few of which remain standing, some officials have talked about putting them in "camps" in northern Rakhine.

Already, two barracks have been constructed next to a police post in the Rakhine state village of Taungpyo Letwe to receive returnees, the Ministry of Information says. The government has stockpiled material and started breaking ground for 41 modular houses.

The idea, the ministry said, is that returnees can stay there temporarily.

That scares Arif Ullah, a 34-year-old Rohingya living at the Balukali camp in Bangladesh. He worries it could lead to something more permanent like apartheid-style camps erected after violence broke out in Sittwe, the state capital, in 2012.

"We miss our home," said Arif Ullah, married and a father of two. "But we are human beings."

"If the Myanmar government is really willing to take us back and give us our rights, they could have built houses on the land where our houses were burned down," he says. "But clearly they don't want to do that. And we are not going back to just live in the camps."

Anagha Neelakantan, Asia Director of the International Crisis Group, meanwhile, warned of potential security risks. She also does not believe large numbers of Rohingya will be returning from Bangladesh any time soon.

And the presence of so many traumatized, hopeless refugees in Bangladesh, she said, could be a recipe for further instability and possible cross-border attacks by ARSA militants.

Attacks by ARSA inside Rakhine state — first in October 2016 and then again in August — triggered the army's heavy-handed, indiscriminate response.

Well-trained and funded in part by the Middle East, the militants' agenda appears to be to localized. They want the Rohingya to enjoy the same rights as others in Myanmar. But if the situation does not improve, there are fears the militants could be exploited by transnational terrorists with their own aims.

Min Aung Hlaing, commander-in-chief of the armed forces, says the decision as to who returns and when should not be left to governments. It should be for residents inside Myanmar to decide.

Though many Rohingya have been living in Myanmar for generations, they are seen by most people in the country as "foreign invaders" from Bangladesh. They have been denied citizenship, effectively rendering them stateless.

In addition to saying the Muslim minority should be allowed to return freely, safely and in dignity, Myanmar's agreement with Bangladesh says Rohingya will need to provide evidence of their residency — something many say they do not have.

While the agreement says that the U.N. High Commission for Refugees will play a role in the repatriations, Adrian Edwards, a spokesman in Geneva, said they have so far been excluded from initial discussions between Myanmar and Bangladesh.

Bangladesh wants them to be involved, sources say. Myanmar does not.

"After the widespread atrocities, safe and voluntary return of Rohingya will require international monitors on the ground in Burma (Myanmar)," says Bill Frelick, refugee rights director at Human Rights Watch. This, he says, means a central role for the UNHCR.

But how that can happen and when is just one of the many obstacles to a Rohingya return to Myanmar that many fear, many simply don't want — and that, in the context of the months of violence that 2017 brought to so many people, is for the moment a political talking point and very little else.