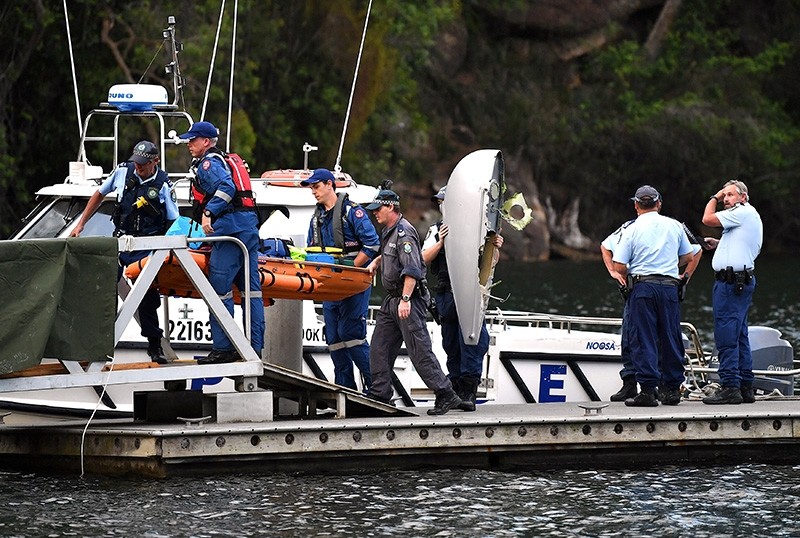 The body of a passenger recovered from a seaplane that crashed on Sunday killing six people, is carried by Australian police and medical officers, at Apple Tree Bay located on the Hawkesbury River, north of Sydney, Dec. 31, 2017. (Reuters Photo)
by Compiled from Wire Services Jan 01, 2018 12:00 am

The CEO of Compass Group Plc, the world's biggest catering firm, and four of his close family members were among the six people who died when the seaplane they were travelling in crashed into a Sydney river on New Year's Eve.

The plane went down Sunday in the Hawkesbury River near the suburb of Cowan some 50 kilometers (31 miles) north of Sydney, as New Year's revelers on the banks watched in shock.

Richard Cousins, 58, chief of the British-based catering and food services giant, died alongside his fiancée Emma Bowden, 48, her daughter Heather Bowden, 11, and his two sons Edward Cousins, 23, and William Cousins, 25, according to Detective Superintendent Mark Hutchings from the New South Wales Police.

Cousins had been due to retire on March 31. Compass said the new chief executive, Dominic Blakemore, would now start on Jan. 1 instead of on April 1 as originally planned, following the news.

Australian media reports identified the victims as the CEO's two sons, his fiancee and her daughter. The pilot of the plane, Gareth Morgan, 44, also died in the crash.

Hutchings said that police had already been in contact with British authorities.

Compass Chairman Paul Walsh said in a statement: "The thoughts of everyone at Compass are with Richard's family and friends, and we extend our deepest sympathies to them."

"Richard was known and respected for his great humanity and a no-nonsense style that transformed Compass into one of Britain's leading companies," he added on Monday.

Cousins led Compass over the past 11 years after his decision to quit as senior independent director of supermarket giant Tesco.

He has been widely credited with turning the company's business around and making Compass into one of the FTSE 100's best-performing firms.

Cousins had also been named as one of the world's best-performing CEOs by Harvard Business Review.

Police are working with the Australian Transport Safety Bureau to recover the wreckage of the plane, which is submerged in 13 meters of water near Cowan.

A probe into the cause of the crash has begun, with a preliminary report expected within 30 days. Authorities have warned it may take up to a year to find out what happened.

The seaplane was part of the Sydney Seaplanes business that has operated since 2005 with no previous record of mishap. Seaplane flights have been cancelled until further notice.

Witnesses recalled seeing the aircraft, a DHC-2 Beaver Seaplane which was heading to Rose Bay in Sydney Harbour, do a sharp turn before plummeting straight into the water.

Prime Minister Malcolm Turnbull, whose father died in a light plane accident, paid his respects to the families of those killed.

"We grieve for those who've lost their lives, and again, our thoughts and prayers are with their families as they come to terms with this terrible loss," he said.