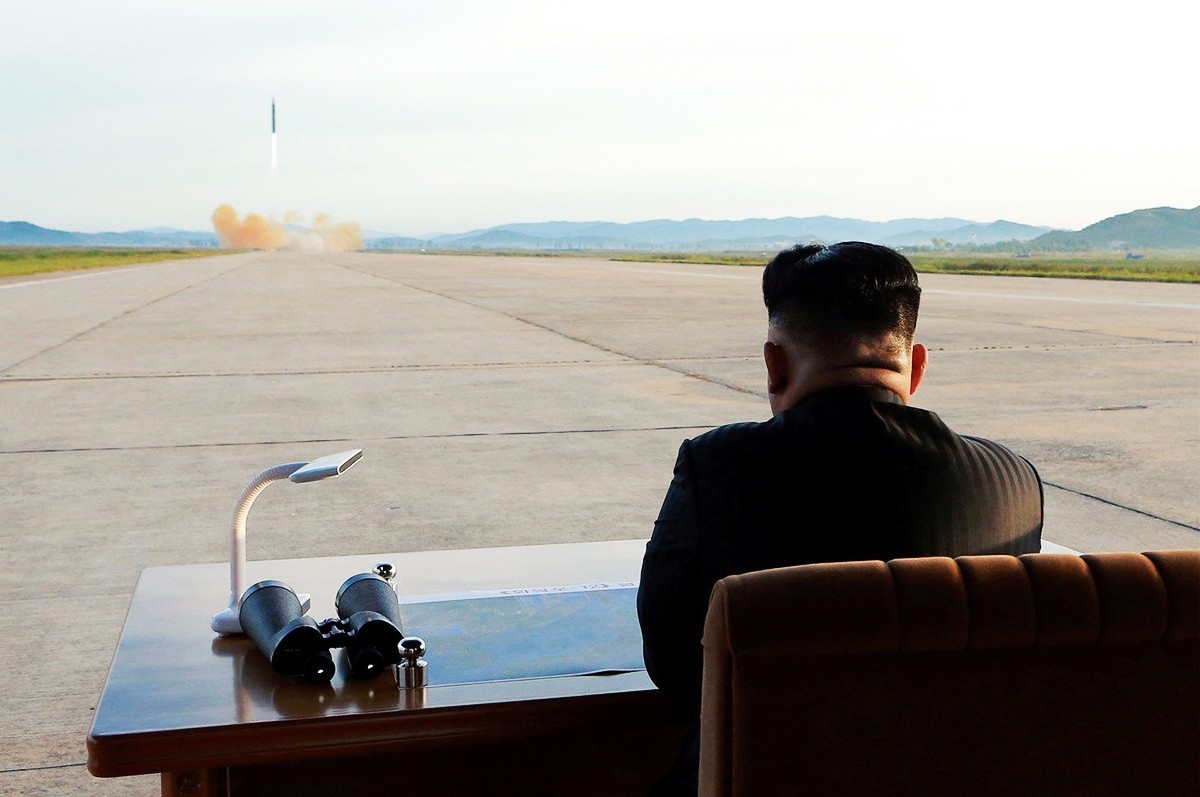 North Korean leader Kim Jong Un said Monday the United States should be aware that his country's nuclear forces are now a reality, not a threat.

Kim, wearing a Western-style gray suit and tie, said in his customary annual address his country had achieved the historic feat of "completing" its nuclear forces and added he has a nuclear button on his desk.

"The U.S. should know that the button for nuclear weapons is on my table," he said during the speech, as provisionally translated by the AP. The official transcript of his address was expected to be released shortly. "The entire area of the U.S. mainland is within our nuclear strike range. ... The United States can never start a war against me and our country."

The North Korean leader also vowed that the country would mass-produce nuclear warheads and missiles, suggesting he would continue to accelerate a rogue weapons program that has stoked international tensions.

Kim, who said Monday that he always had a nuclear launch button on his desk, has presided over multiple missile tests in recent months and the North's sixth and most powerful nuclear test -- which it said was a hydrogen bomb -- in September.

"We must mass-produce nuclear warheads and ballistic missiles and speed up their deployment," said Kim in his annual address to the nation.

He reiterated his claims that North Korea had achieved its goal of becoming a nuclear state but insisted its expansion of the weapons program was a defensive measure.

"We should always keep readiness to take immediate nuclear counter-attacks against the enemy's scheme for a nuclear war."

Pyongyang dramatically ramped up its efforts to become a nuclear power in 2017, despite a raft of international sanctions and increasingly bellicose rhetoric from the United States.

The North claims it needs nuclear weapons to protect itself from a hostile Washington and has strived to create a warhead capable of targeting the U.S. mainland.

U.S. President Donald Trump has responded to each test with his own amplified declarations, threatening to "totally destroy" Pyongyang and taunting Kim, saying the North Korean leader was on "a suicide mission".

But far from persuading Kim to give up his nuclear drive, analysts say Trump's tough talk may have prompted the North Korean leader to push through with his dangerous quest.

"(The North) can cope with any kind of nuclear threats from the U.S. and has a strong nuclear deterrence that is able to prevent the U.S. from playing with fire," Kim said Monday.

The New Year's address is an annual event in the North and is watched closely for indications of the direction and priorities Kim may adopt in the year ahead.

This year's speech was seen as particularly important because of the high tensions over Pyongyang's frequent missile launches and its nuclear test in 2017. The tests were the focus of fiery verbal exchanges between the North and Trump, who has derisively called Kim, "little rocket man."

"We're actually closer, in my view, to a nuclear war with North Korea and in that region than we have ever been," said Mike Mullen, a former chairman of the U.S. joint chiefs of staff, in an interview on ABC's "This Week" Sunday.

When asked for a response to Kim's claim that he had a nuclear button on his desk, Trump said "We'll see, we'll see", in comments to reporters during the New Year's Eve party at his Mar-a-Lago resort in Florida.

Pyongyang sees American military activities in the region -- such as the joint drills it holds with the South -- as a precursor to invasion.

It has rattled the international community by testing increasingly longer-range intercontinental ballistic missiles (ICBMs) throughout 2017.

But any military intervention by the U.S. could escalate rapidly into a catastrophic conflict that would threaten the lives of millions.

At a time when the risk of a U.S. preemptive strike is "higher than ever", Koh Yu-Hwan, Political Science Professor at Dongguk University, said the speech indicated Kim was using the Olympics gesture as a means to "shift from confrontation to peaceful co-existence with the United States".

"When he said a nuclear launch button is always on his desk, he is hinting it is not necessary for the North to stage nuclear or ICBM tests in the foreseeable future," he told AFP, adding however that Kim also wanted to build "massive nuclear retaliation capabilities".

The third raft of sanctions imposed last year, which the North slammed as an "act of war", also received the backing of China -- the country's sole major ally and economic lifeline.

Observers say Washington must open talks with the North to defuse tensions -- but that remains a challenge.

Pyongyang has always said it will only deal with the U.S. from a position of equality as a nuclear state.

Washington has long insisted that it will not accept a nuclear-armed North and Pyongyang must embark on a path towards denuclearization before any talks.