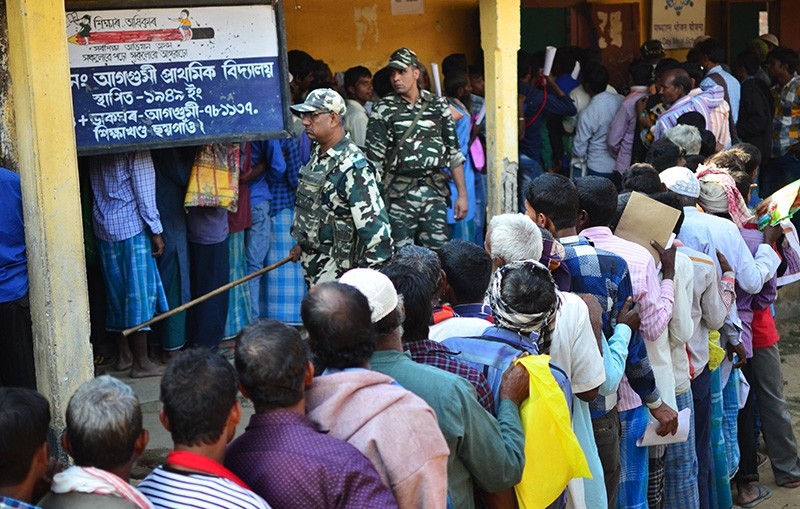 People stand in line to check their names on the first draft of the National Register of Citizens (NRC) at Gumi village of Kamrup district in the Indian state of Assam on January 1, 2018. (AFP Photo)
by Compiled from Wire Services Jan 01, 2018 12:00 am

Around 13 million people living in northeastern India's largest state have been left off a controversial draft list of citizens released Monday by authorities, who are under pressure to identify and expel illegal immigrants, mostly Muslims.

Assam has long struggled to curb immigration from neighboring Bangladesh and is the only Indian state to compile a register of citizens.

The latest draft called the National Register of Citizens (NRC) includes only 19 million of the state's more than 32 million residents. It was prepared on the orders of the Supreme Court, which is hearing a series of claims to Indian citizenship from undocumented residents of the state.

But there are also concerns the Assam state government, which is led by Prime Minister Narendra Modi's Hindu nationalist Bharatiya Janata Party (BJP), could use the issue to target the state's Muslim minority.

Political leaders have vowed to deport anyone staying in the state illegally, although it is far from clear that Bangladesh would accept them.

The exercise could lead to communal tensions in Assam, which has the second highest percentage of Muslims of any Indian state. Muslims leaders have called the NRC a tool to make them stateless, likening themselves to Myanmar's persecuted Rohingya minority.

"The NRC is being done to identify illegal Bangladeshis residing in Assam," Himanta Biswa Sarma, Assam's finance minister who is also in charge of the citizenship register, told Reuters. "All those whose names do not figure in the NRC will have to be deported. We're taking no chances and hence all security measures have been taken."

Sarma said Hindu Bangladeshis who faced persecution there would be given shelter in India, in line with federal policy.

A spokesman for the Ministry of Home Affairs in New Delhi had no immediate comment.

Bangladesh's Home Minister Asaduzzaman Khan said Dhaka had no knowledge of any plans to deport people. "We didn't receive any information from the Indian government, neither formally nor informally," he said.

The BJP won elections in the state in 2016 after promising to root out illegal immigrants from mainly Muslim Bangladesh and protect the rights of indigenous groups.

Anyone living in Assam must now prove that their forebears appeared either in the state's only previous register of citizens, compiled in 1951, or on any electoral roll published before March 1971 to be eligible for citizenship.

Migrants have long been accused of illegally entering the state from Bangladesh and taking land, causing tensions with local people and sporadic outbreaks of communal violence.

It is estimated that there are more than 2 million Muslims in Assam who trace their roots to Bangladesh.

To be recognized as Indian citizens, they must be able to produce documents proving that they or their family lived in the country before March 24, 1971.

"My grandparents and my parents were all born in India but today we are finding it difficult to provide documents to support our claims that we are Indians," said Asiful Rahman, a teacher at an Islamic seminary in a Muslim-majority district of Assam.

"Our parents and grandparents were illiterate and did not keep any legal documents, and for that we are facing the test of proving our Indian nationality now."

With millions anxious about their fate, the government strengthened security across the state before releasing the list, mobilizing some 60,000 soldiers and paramilitaries.

Upamanyu Hazarika, a senior lawyer who has campaigned against illegal immigration in the state, said the process of acquiring citizenship had been dogged by corruption.

"The Supreme Court will also have to address the complicated fate of children born to Bangladeshi illegals on Indian soil after 1971," he added.

Tens of thousands of people fled to India from Bangladesh during its war of independence from Pakistan in the early 1970s. Most of them settled in Assam, in India's north-east, and the neighboring state of West Bengal, where there are similar demands to send back illegal Muslim immigrants.

When Modi's BJP swept to power nationally in 2014, the election was marred by sectarian violence in Assam that killed more than 40 people. During that campaign, Modi told illegal immigrants in states bordering Bangladesh to have their "bags packed" ready to be sent home should he win.

Since taking office, meanwhile, the government has been making it easier for Hindus, Buddhists and Christians from Bangladesh and Pakistan to gain citizenship in India.

Proposed changes to the law would mean no Hindu or other minority from those countries who arrived in India before the end of 2016 would be considered illegal immigrants.

Modi's administration also plans to nearly halve the number of years Hindus and other minorities from the neighboring countries need for naturalization to six years, in line with a long-held belief on the religious right that India is the home for all Hindus.

A pilot project to update the NRC in Assam in 2010, under the previous Congress government, had to be stopped due to what the government called "law and order problems". The current process is being monitored by the Supreme Court and it could be months or years before the list is finalized.

The Assam government has stepped up security after a senior Muslim leader told a news conference last month that any registration of citizens on the basis of religion would be "devastating" for the country and there could be "unrest".

"One needs a number of documents to prove the family lineage and nationality," said Rafiqul Ali, a college student in the Muslim-dominated Barpeta district of Assam. "I know many of my friends and relatives who were unable to submit all the documents required to get names enlisted in the NRC."