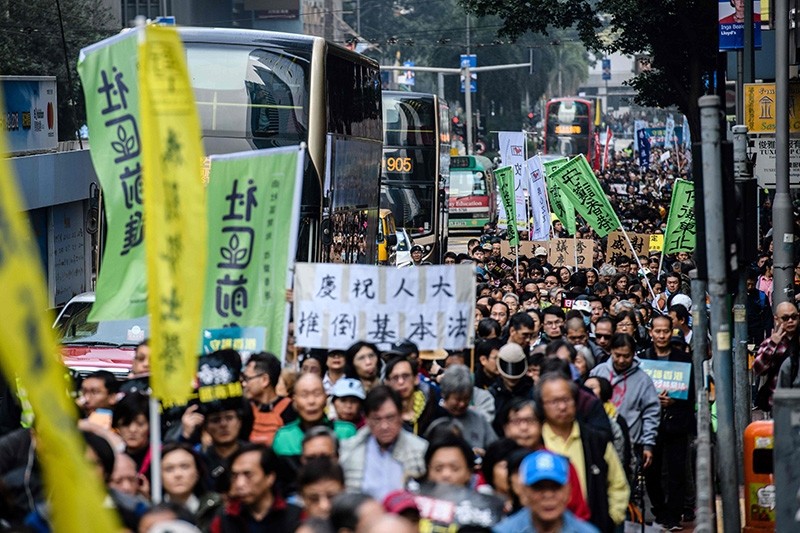 Angry protesters marched through Hong Kong Monday against what they described as suppression by Beijing, days after Chinese authorities ruled that part of a city rail station would come under mainland law.

Semi-autonomous Hong Kong has been ruled under a "one country, two systems" deal since Britain returned it to China in 1997 and enjoys rights unseen on the mainland, including freedom of speech and an independent judiciary.

But a string of recent incidents have fueled concern over the erosion of its autonomy and rule of law, including the jailing of prominent pro-democracy activists.

"We are here to tell the government that we will not give up," said Joshua Wong, one of the democracy activists jailed last year, but who is now out on bail pending an appeal.

The demonstration was largely peaceful, though some protesters who tried to later gather in a forecourt of the government's headquarters skirmished briefly with security guards.

The protesters, who included many middle-aged and elderly citizens, held up banners and chanted the march's main theme to "Protect Hong Kong" during a walk of several kilometers to the city's government headquarters.

Others decried an unprecedented move by China's parliament last week that said part of a high-speed railway station being built in Hong Kong would be regarded as mainland territory governed by mainland laws.

The final stage before implementation is a vote by Hong Kong's legislative council, which is weighted towards Beijing.

Pro-democracy lawmakers, campaigners and some in the city's legal community say the plan is a violation of Hong Kong's mini-constitution, the Basic Law, which says national laws do not apply to Hong Kong with a few exceptions.

Hong Kong's pro-Beijing government argues the rail setup is for the convenience of passengers and both local and Chinese authorities insist it does not impinge on the city's autonomy.

The Hong Kong government, in a statement, said it "fully respects the right of Hong Kong people to take part in processions and their freedom of expression."

China's leader Xi Jinping has said that while Hong Kong enjoys a high degree of autonomy under "one country, two systems," Beijing still holds supreme authority over the city and won't tolerate any challenge to its authority.