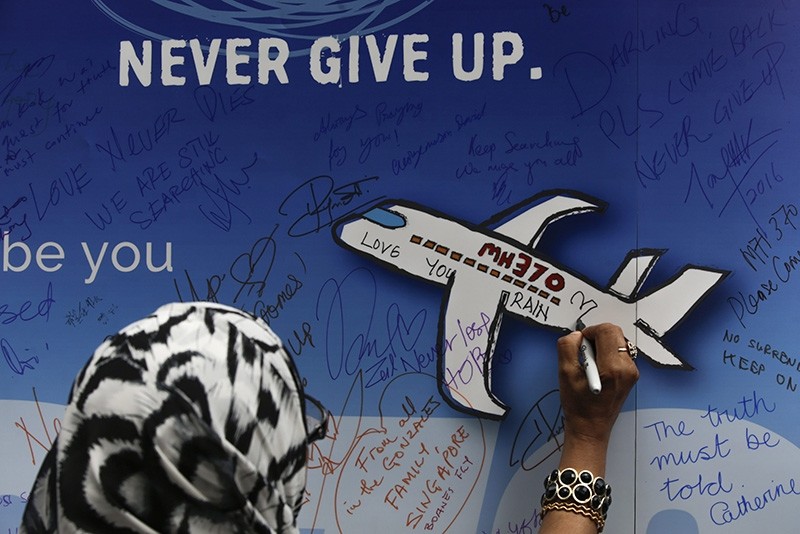 File photo from March 6, 2016, shows a woman writing messages for the passengers of missing Malaysia Airlines Flight 370 during a remembrance ceremony marking the second anniversary of the planeu2019s disappearance, in Kuala Lumpur, Malaysia. (EPA Photo)
by Associated Press Jan 03, 2018 12:00 am

A U.S.-based company has dispatched a boat into the Indian Ocean in hopes of resuming the search for missing Malaysia Airlines Flight 370, even though the company doesn't have a contract to do the job.

The search vessel named Seabed Constructor left the South African port of Durban on Tuesday as part of the Ocean Infinity company's plan to look for debris in the southern Indian Ocean. The boat has unmanned submarines that can descend deep into the ocean.

Ocean Infinity was taking advantage of favorable weather to move the vessel "towards the vicinity of the possible search zone," the company said in a statement.

"This is designed to save time should the contract award be forthcoming, as hoped," it said. "We will confirm as and when the contract is awarded and the search can resume."

The Malaysian government is negotiating with Ocean Infinity and will make an announcement next week, Transport Minister Liow Tiong Lai said.

The Malaysia Airlines Boeing 777 disappeared soon into its flight from Kuala Lumpur to Beijing on March 8, 2014. The plane was carrying 227 passengers and 12 crew.

The governments of Malaysia, China and Australia called off the 1,046-day official search on Jan. 17 last year. The Australian Transport Safety Bureau's final report on the search conceded that authorities were no closer to knowing the reasons for the plane's disappearance, or its exact location.