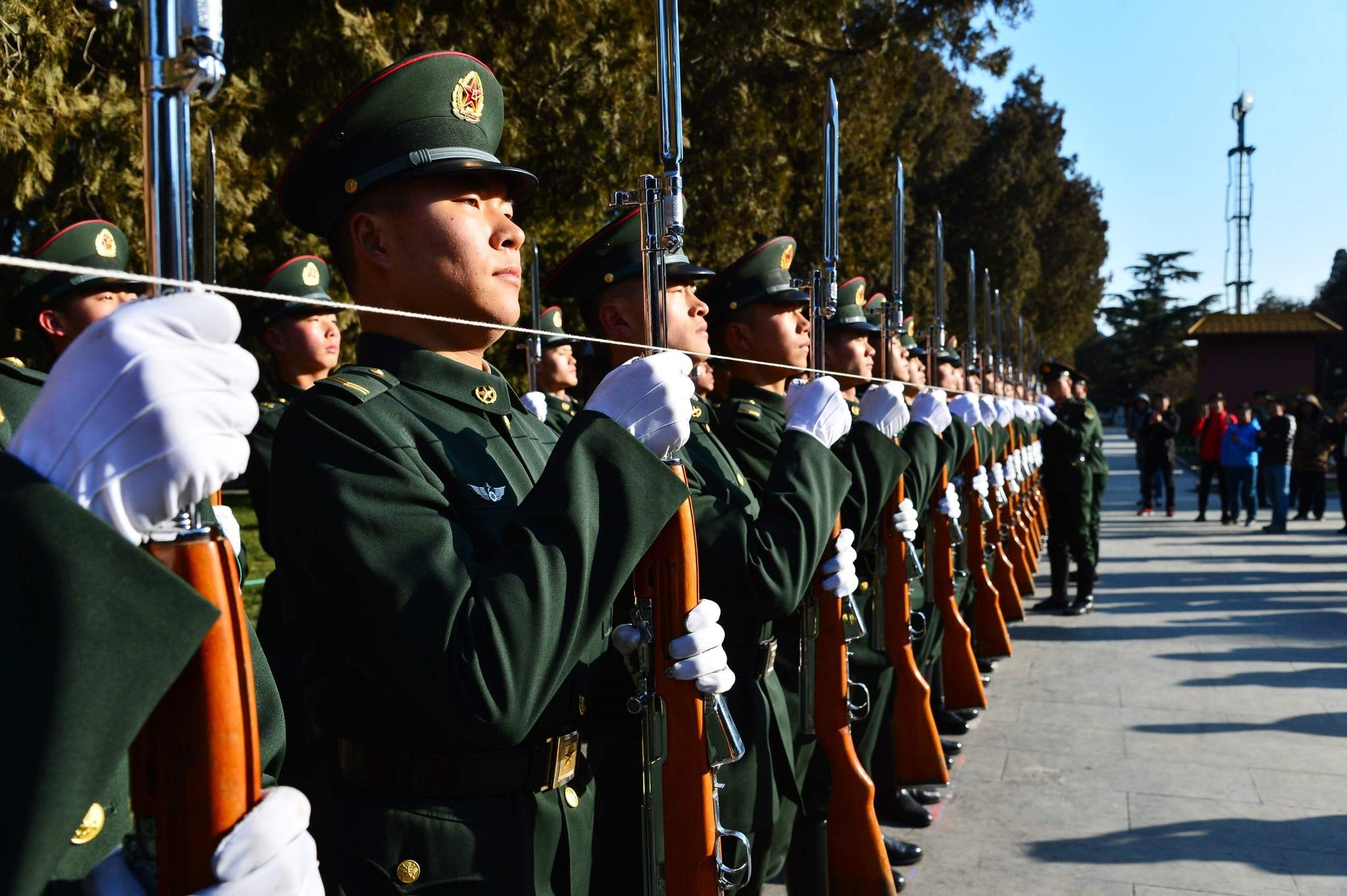 This photo taken on Jan. 1, 2018 shows members of the Chinese People's Liberation Army honour guard training at the Working People's Cultural Palace after the flag raising ceremony in Beijing. (AFP Photo)
by Jan 05, 2018 12:00 am

President Xi Jinping has issued a blunt call for China's military to be ready for war and unafraid to die defending the country, as geopolitical tensions mount in Asia.

Xi's exhortation to the world's largest fighting force, parts of which were revealed only late Thursday, came during what state media characterised as a rare address by the Chinese leader to the country's entire military.

Xi cemented his status as China's most powerful leader in decades during an October Communist Party congress, and this week's rhetoric and images of massed soldiers and tanks seemed designed to back up his new strongman image.

China's military personnel should "neither fear hardship nor death," Xi told thousands of military personnel during an inspection visit Wednesday to the People's Liberation Army's Central Theater Command in northern Hebei province, according to the official Xinhua news agency.

Xi also called for the military, a once-backward force whose rapid modernisation over recent years has raised alarm in Asia and Washington, to continue upgrading.

He urged the PLA to step up research into high-tech means of warfare and engage in "real combat training", Xinhua said.

"Create an elite and powerful force that is always ready for the fight, capable of combat and sure to win in order to fulfil the tasks bestowed by the Party and the people in the new era," he was quoted saying.

As head of the Communist Party's Central Military Commission, Xi is commander-in-chief of China's more than two-million-strong armed forces.

Xinhua called Xi's address to the troops "the first time for the commission to hold a mobilisation meeting for the whole armed forces."

Other media reports said thousands of troops elsewhere in the country assembled at their installations to hear his speech.

Since taking office in 2012, Xi has pushed for a muscular China, including calls in October to develop a "world-class" Chinese army by 2050.

China's neighbours have watched warily as the PLA has upgraded its arsenal with increasing sophisticated weaponry and sought to create a more effective and professional fighting force.

But concerns have grown as Beijing has imposed increasingly assertive claims to vast expanses of the contested South China Sea, while engaging in confrontations with Japan over disputed islands in the East China Sea, and with India over Himalayan regions.

Temperatures also have risen over North Korean leader Kim Jong-Un thumbing his nose at the world by repeatedly testing his country's banned nuclear weapons and missiles, while exchanging tit-for-tat threats with US President Donald Trump.

During his visit to the military command, Xi was shown in combat fatigues inspecting troops, tanks, sniper training, and peering down the sights of an automatic rifle.

State media also said he paid a visit to an exhibit detailing the PLA's experience battling American-led forces during the Korean War.