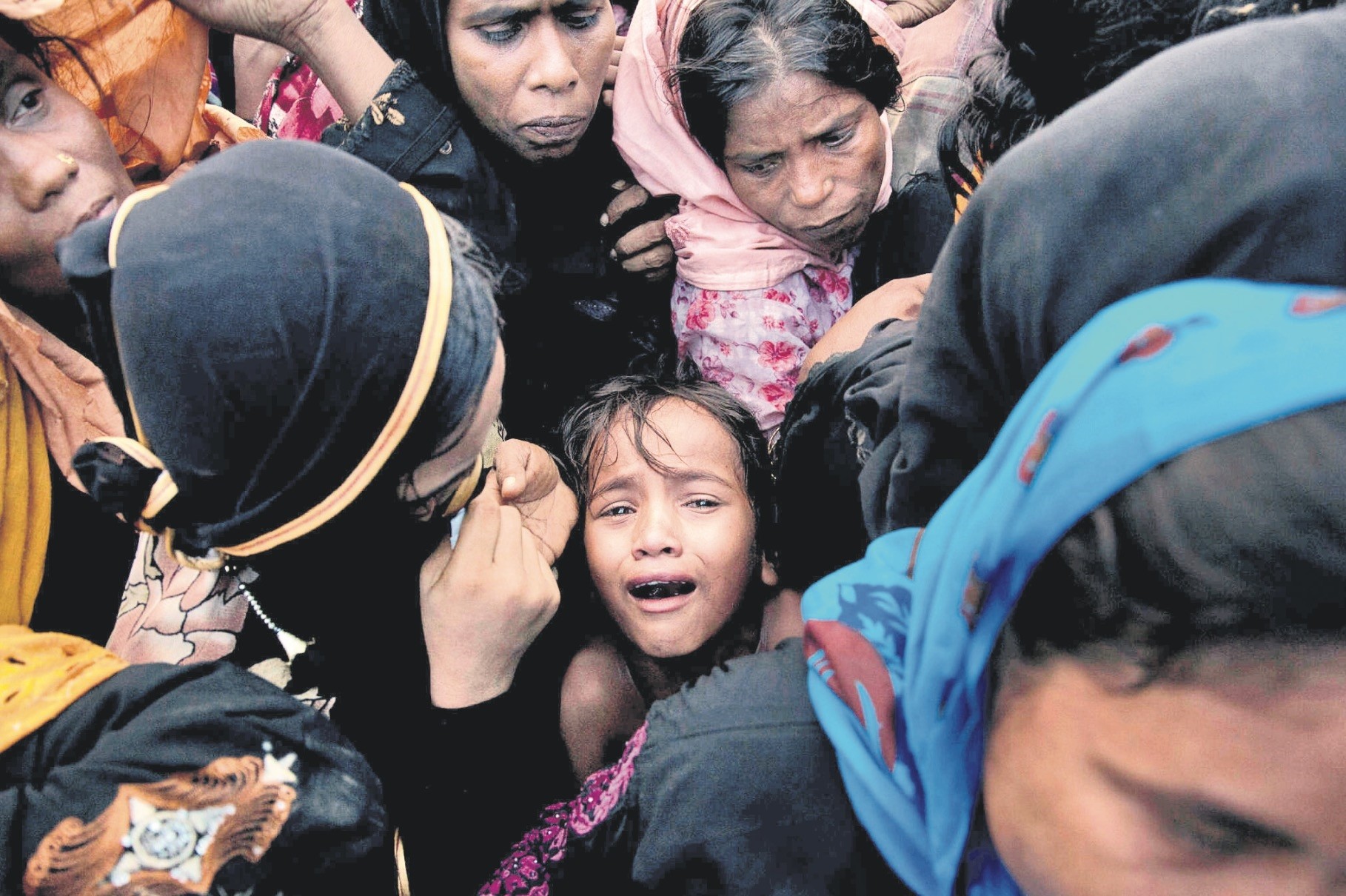 A Rohingya refugee child cries as she stands amid a crowd to receive food being distributed near Balukhali refugee camp, Cox's Bazar, Bangladesh, Sept. 20, 2017.
by Compiled from Wire Services Jan 05, 2018 12:00 am

Amid growing safety concerns in a country where anti-Muslim sentiment has been on the rise, Myanmar will start Rohingya refugee repatriations by Jan. 22

Repatriations of Rohingya refugees will begin by Jan. 22, Myanmar said, as the United Nations and rights groups cast concern over the process.

Some 655,000 Rohingya fled Myanmar's northern Rakhine state to Bangladesh following a military crackdown, labelled ethnic cleansing by the U.N., that was launched in August of last year.

Refugees would begin returning in line with an agreement signed by the two countries in November, Myanmar's minister for social welfare, relief and resettlement, Win Myat Aye, told the dpa news agency yesterday. The people would return to their original villages after being housed at a temporary area, he said.

At least 354 Rohingya villages have been burned in Rakhine since August, according to analysis of satellite imagery by Human Rights Watch.

A spokesperson for the U.N. High Commissioner for Refugees said on Wednesday that returns should not be premature and that further measures are required to ensure their safety in Myanmar.

Myanmar's government is in "la la land" if it believes Rohingya would return in line with the minister's schedule, warned Phil Robertson, deputy Asia director at Human Rights Watch (HRW).

"Why in the world would they dare go back within arm's length to the army that just systematically shot, raped and murdered them and torched their homes?" he told dpa on Wednesday.

The HRW also warned that Rohingya could end up languishing in internally displaced persons camps.

Responding to criticism that Rohingya are unlikely to return to Myanmar without a guarantee of safely returning to their homes, Aye Win Mint said: "We are trying to have the rule of law in northern Rakhine state so that they can come back safely and voluntarily." The minister said returning Rohingya would need a National Verification Card (NVC) to be resettled, saying it would allow freedom of movement and was a step toward citizenship.Despite the squalid conditions in the overcrowded camps in Bangladesh, many of the refugees say they are reluctant to return to Myanmar unless they are granted full citizenship. "We won't go back to Myanmar unless all Rohingya are granted citizenship with full rights like any other Myanmar national," said Abdur Rahim, 52, who was a teacher at a government-run school in Buthidaung in Rakhine before fleeing across the border. "We won't return to any refugee camps in Rakhine," he told Agence France-Presse (AFP) in Bangladesh.

The stateless Rohingya have been the target of communal violence and vicious anti-Muslim sentiment in mainly Buddhist Myanmar for years. Myanmar has denied citizenship to the Rohingya since 1982, and excludes them from the 135 ethnic groups it officially recognizes, which effectively renders them stateless. They have long faced discrimination and persecution with many Buddhists in Myanmar calling them "Bengalis" and saying they migrated illegally from Bangladesh, even though they have lived in the country for generations.