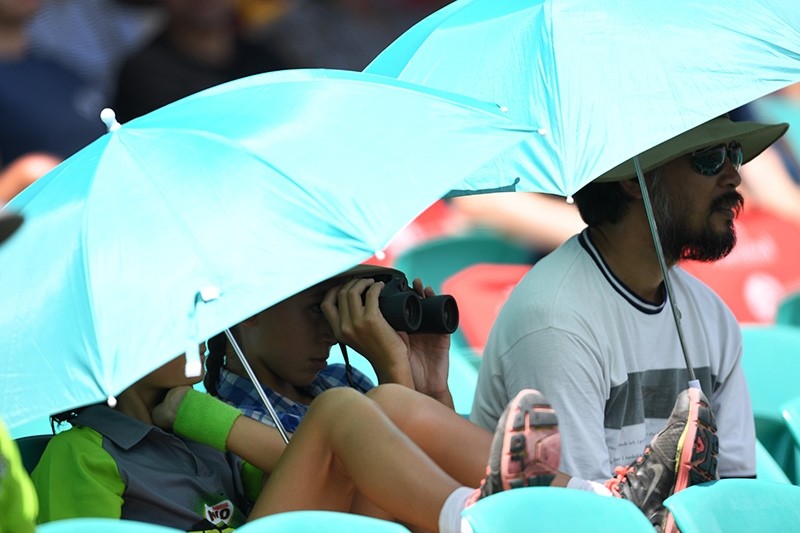 Spectators shelter from the sun and heat at match between Australia and England at the Sydney Cricket Ground in Sydney, Sunday, Jan. 7, 2018. (EPA Photo)
by Daily Sabah with Wires Jan 07, 2018 12:00 am

Dangerous heat is roasting parts of Australia with temperatures that haven't been seen in decades.

The temperature in Sydney hit an almost 80-year-high of 47.3 degrees Celsius (117 Fahrenheit) on Sunday — a sharp contrast to the bitter cold that has gripped much of the U.S.

Residents were urged to drink extra water and limit their time outdoors because of air pollution resulting from the hot weather.

Thousands were left without power, and total fire bans were put in place as officials warned of a severe danger.

Despite precautions, fires spread through the country, raising significant concerns.

In southern Australia, fire crews were working at capacity thanks to bush fires in the states of Victoria and South Australia.

The blaze has already destroyed at least one house and multiple sheds, and left large swathes of the countryside on fire.

A further 30 houses were evacuated.

A separate fire was reported about 200 kilometers north of Melbourne, in Benalla, prompting evacuation calls.

The blaze was swiftly brought under control, but not before it expanded to consume about 100 hectares.