Seoul to discuss reunions of separated families in talks with N. Korea 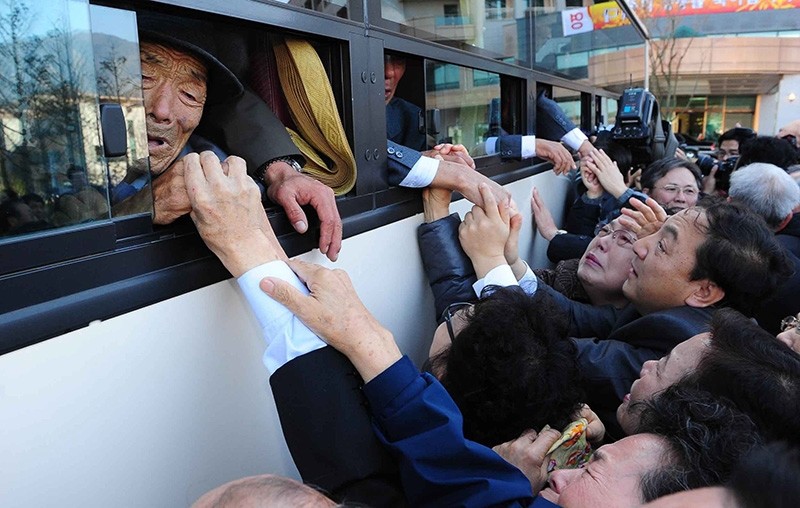 In a file picture taken Nov. 1, 2010 North Koreans (in the bus) grip hands of their South Korean relatives as they bid farewell following their three-day separated family reunion meeting. (AFP Photo)
by Jan 08, 2018 12:00 am

South Korea will seek discussions on resuming reunions of separated families at this week's inter-Korean talks, Seoul's top delegate said Monday, as the North trumpeted the importance of achieving reunification.

The two Koreas agreed last week to hold their first official dialogue in more than two years and will meet Tuesday at the truce village of Panmunjom.

The talks will largely focus on the North's participation in next month's Winter Olympics in the South, but the two sides are expected to also bring up their own issues of interest.

"We will prepare for discussions on the issue of separated families and ways to ease military tensions," Unification Minister Cho Myoung-Gyon told reporters, according to the Yonhap News Agency.

Because the 1950-53 Korean War ended with an armistice rather than a formal peace treaty, the two Koreas remain technically at war.

Tensions soared last year as the North made rapid progress on its banned weapons programs, launching ballistic missiles it said are capable of reaching the United States and carrying out its sixth nuclear test, by far its most powerful.

Their tentative rapprochement comes after North Korea's leader Kim Jong-Un warned in his New Year speech that he had a nuclear button on his desk, but also said Pyongyang could send a team to the Winter Olympics in Pyeongchang.

Seoul responded with an offer of talks, and last week the hotline between the neighbors was restored after being suspended for almost two years.

North Korea's state media has stopped condemning the South and instead called for "independent reunification" without relying on other countries such as the United States.

"The master of improved inter-Korean relations is not the outsiders but the Korean nation itself," the North's official Korean Central News Agency (KCNA) said at the weekend.

"The flunkeyism and idea of dependence on outside forces are the venom which makes the nation slavish and spiritless," it added.

U.S. President Donald Trump said at the weekend that the rare talks between the two Koreas would go "beyond the Olympics" and that Washington could join the process at a later stage.

Also in recent days, the United States and South Korea agreed to delay annual joint military exercises until after the Games, apparently to help ease nerves.

The regular joint drills have been criticized by some as adding to regional tensions. Beijing and Moscow have both called for them to be suspended.

But U.S. ambassador to the United Nations Nikki Haley said that there was "no turnaround" in the U.S. stance, reiterating that the North must stop nuclear tests for talks with Washington.

The divided families are one of the most emotive outcomes of the Korean War, which saw the peninsula formally partitioned in 1953, with around 60,000 increasingly elderly South Koreans still hoping to meet their relatives again.

The last round of reunions were held in 2015 and the number of ageing divided family members is dwindling.

North Korean officials have previously told AFP that they would not consider further reunions unless several of its citizens are returned by the South.