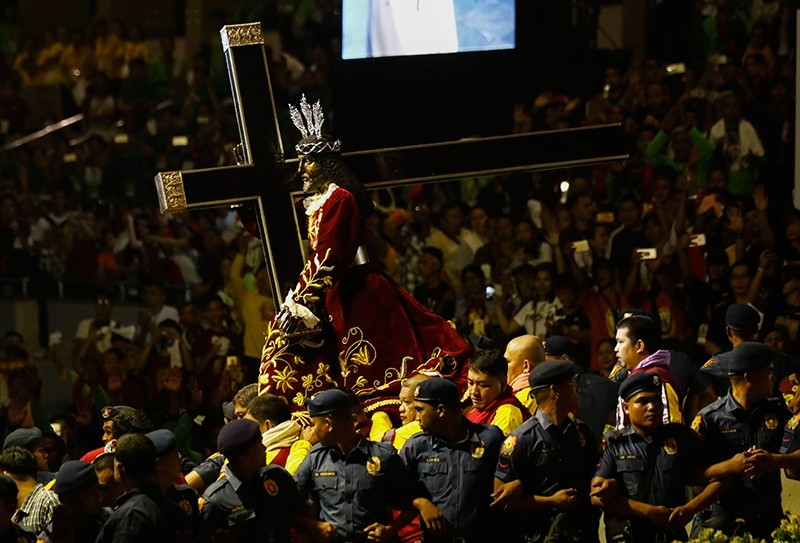 The Black Nazarene statue is taken from a stage to begin a procession as Catholic devotees flock around to mark its feast day in Manila, Philippines, Jan. 9, 2018. (EPA Photo)
by Compiled from Wire Services Jan 09, 2018 12:00 am

Hundreds of thousands of devotees, many barefooted, joined a chaotic procession in the Philippine capital Tuesday for a black Jesus Christ statue, in one of the biggest annual religious festivals in the predominantly Roman Catholic nation.

The faithful gathered in downtown Manila to follow a carriage bearing the statue called the Black Nazarene, believed to have healing powers, in a parade that began at dawn and may last until evening or even longer.

Men surrounded the carriage that was pulled by ropes, while the crowd waved towels and handkerchiefs in a sign of praise to the life-sized image of Jesus kneeling with a cross on his shoulder.

Processions and other religious rites were also held elsewhere in the country of 105 million people to celebrate the feast.

Citing police estimates, local media said this year's festivities may draw 17 million devotees nationwide, some seeking healing for illnesses and forgiveness for sins and others expressing gratitude for blessings.

Around 380,000 people were in the Manila procession, based on an early afternoon estimate by police, excluding those waiting elsewhere along the parade route.

"There will always be a need for someone, and that is exactly Jesus."

The Philippine Red Cross said it had assisted more than 600 devotees who were feeling unwell, or suffered injuries during the morning part of the parade as the crowd swelled and many clamored to reach out towards the icon.

The procession was held under extra-tight security after the Philippines came under a disastrous pro-Daesh terror group attack last year.

Philippine police and military deployed more than 6,000 personnel, including snipers and bomb squads backed by a surveillance helicopter and drones, to secure the event. Authorities say no specific terrorist threat has been monitored. More than 600 devotees have been treated mostly for minor injuries and exhaustion.

Hundreds of militants laid siege for five months in southern Marawi city, leaving more than 1,100 combatants and civilians dead in the worst Daesh group-linked attack so far in Asia. Troops crushed the uprising in October.