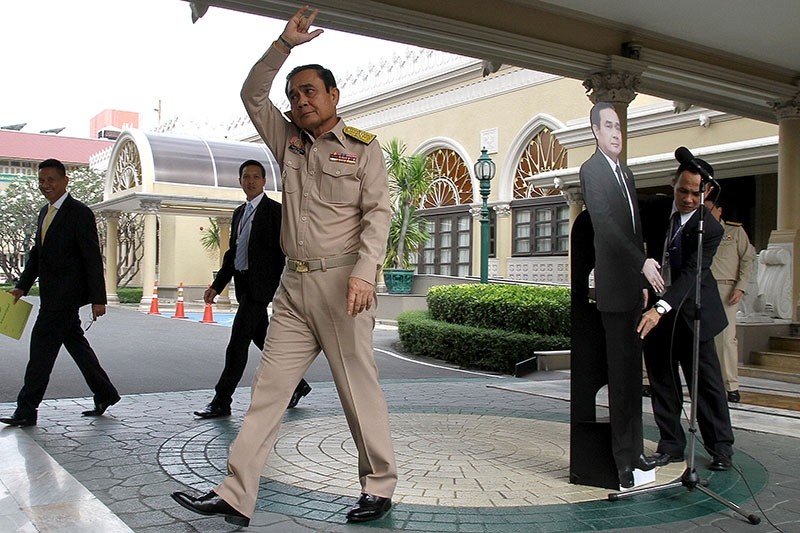 Thailand's Prime Minster Prayuth Chan-ocha waves to reporters next to a cardboard cut-out of himself at the government house in Bangkok, Thailand Jan. 8, 2018.(Dailynews via Reuters)
by Compiled from Wire Services Jan 09, 2018 12:00 am

Thailand's prime minister evaded journalists' questions on Monday by bringing out a life-sized cardboard cutout of himself and telling the reporters to quiz it instead of him.

Prayuth Chan-ocha, known for his temperamental outbursts, then turned on his heel and walked off, leaving the mock-up behind, to bemused looks and awkward laughter from the Government House press pack.

The prime minister had briefly spoken to the media after attending an event promoting upcoming Children's Day, but deployed his dodging tactic before anyone could ask him about a number of pressing political issues.

"If you want to ask any questions on politics or conflict," he said, "ask this guy."

It isn't the first time Prayuth — a general who seized power in a bloodless coup in 2014 — has dumbfounded the media. In the past he has fondled the ear of a sound technician for several minutes during an impromptu news conference, flung a banana peel at cameramen, and threatened, with gruff humor, to execute any journalist who criticized his government.

The gesture has been criticized by Human Rights Watch which said it shows the military junta chief's "contempt of media criticism" in a country yet to restore democracy since a 2014 coup.

Seventeen life-sized cutouts of Prayuth have been set up around the government compound ahead of Children's Day on Saturday. They show Prayuth in various outfits including sportswear, work suits and traditional Thai attire.

Reaction to the bizarre gesture was largely muted on social media on Tuesday but Human Rights Watch said it added to a "long list of his bizarre and bullying reactions to reporters".

When it took power, Prayuth's government, packed with military leaders, enjoyed considerable public support for ending a prolonged period of often-violent street politics. But as the junta's rule has stretched on, criticism of its often-repressive policies and lack of transparency has grown markedly.

Prayuth has promised elections in November, though he has made similar promises several times previously and then delayed the balloting.

However, it has yet to lift a ban on political campaigning despite pressure from groups of all political stripes.

"Even when the junta promises to hold an election, there is no open space for media freedom," said Sunai.

Children's Day is celebrated annually in Thailand on the second Saturday of January. On the day, armed forces open up military barracks to children to let them pose with weapons and tanks. Children are also invited to sit at the prime minister's work desk inside Government House.