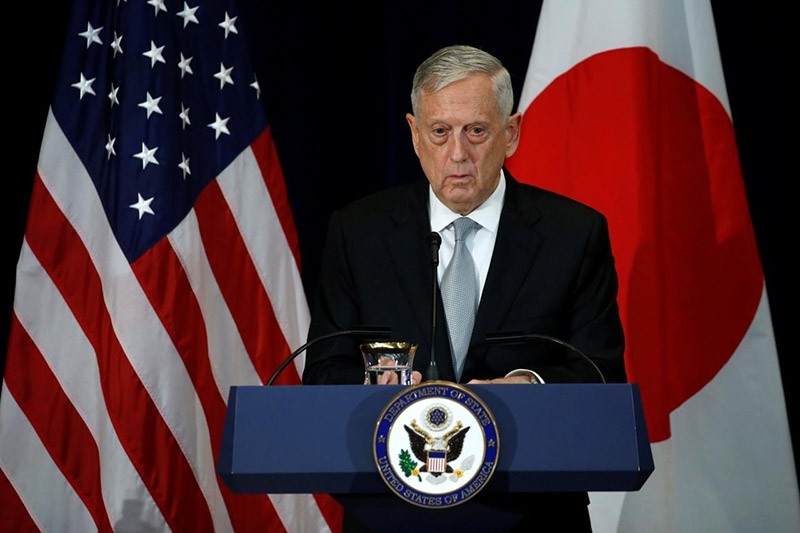 U.S. Defense Secretary James Mattis, with his Japanese counterparts, participates in a news conference after their U.S.-Japan Security talks at the State Department in Washington, U.S., August 17, 2017. (Reuters Photo)
by Jan 10, 2018 12:00 am

The U.S. government has approved the sale of anti-ballistic missiles to Japan to defend itself against a growing nuclear and missile threat from North Korea, a State Department official said on Tuesday.

News of the sale comes as North and South Korea hold their first talks in more than two years aimed at solving the crisis over the North's nuclear missile program.

The missile deal follows a year of ramped-up North Korean missile launches, some of them over Japanese territory, and its sixth and most powerful nuclear test. These actions have prompted a stepped-up U.S.-led campaign to toughen U.N. sanctions, which Pyongyang has called an act of war.

The State Department on Tuesday asked Congress to approve the $133 million sale of the four missiles and related hardware, which can be launched from destroyers at sea or from a land-based system.

The sale of the anti-ballistic missiles, made by Raytheon Co and BAE Systems, follows through "on President Trump's commitment to provide additional defensive capabilities to treaty allies threatened by the DPRK's provocative behavior," the official said, using the initials for North Korea.

The proposal to build two Aegis Ashore batteries without the missiles will likely cost at least $2 billion and was not likely to be operational until 2023 at the earliest, sources familiar with the plan told Reuters in December.

U.S. Secretary of Defense James Mattis and Japan Minister of Defense Itsunori Onodera, in a phone call on Monday, "condemned North Korea's reckless and unlawful behavior," according to a Pentagon statement.