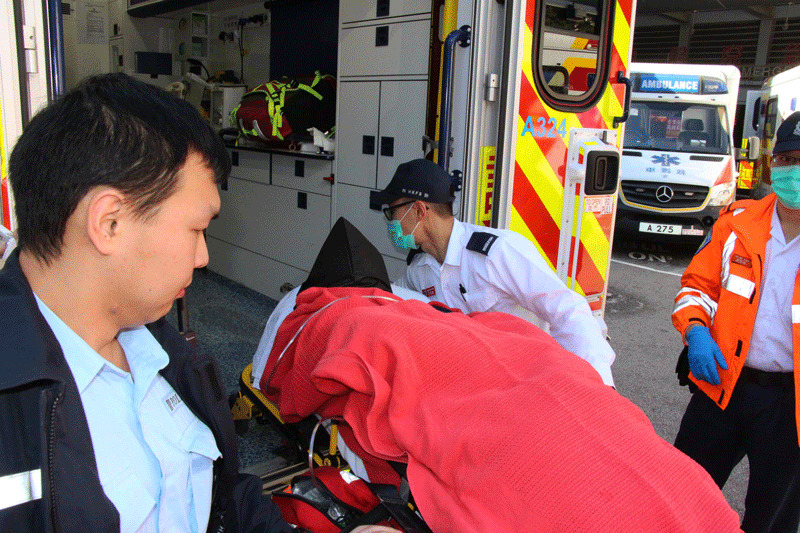 This handout from Apple Daily taken on January 14, 2018 shows a murder suspect (C), accused of killing a women and boy at the Ritz-Carlton, arriving on a gurney at the Queen Elizabeth Hospital under police escort in Hong Kong. (AFP Photo)
by Jan 14, 2018 12:00 am

A South Korean has been arrested for the suspected murder of his wife and child on Sunday at the luxury Ritz-Carlton hotel on Hong Kong's harbourfront, officials said.

Police rushed to the hotel after receiving a report on Sunday morning that a man and a woman were fighting.

The woman and a young boy were found dead at the scene while the man was arrested on suspicion of murder and taken to hospital, police said.

Police did not confirm the relationship between the three but told AFP they were all foreign nationals.

A spokesperson from the South Korean consulate in Hong Kong confirmed the three were nationals and from the same family.

According to local news site Apple Daily, the couple, in their 40s, and their seven-year-old son checked into the five-star hotel a few days before.

A source with knowledge of the investigation told AFP that a friend of the suspect had warned authorities in South Korea he was potentially suicidal shortly before the incident.

The Ritz-Cartlon is located on the top floors of Hong Kong's tallest skyscraper -- the International Commerce Centre -- and is famous for panoramic views of the city and its Victoria Harbour.

"Our thoughts are with the family of the guests involved at this very difficult time," a hotel spokesperson in Hong Kong told AFP, declining to comment further as an investigation was ongoing.

In a separate incident, Hong Kong police are investigating the murder-suicide of a couple found dead at a public housing estate near the border with mainland China, local media reported.