At least 20 injured after floor at Indonesia's stock exchange collapses 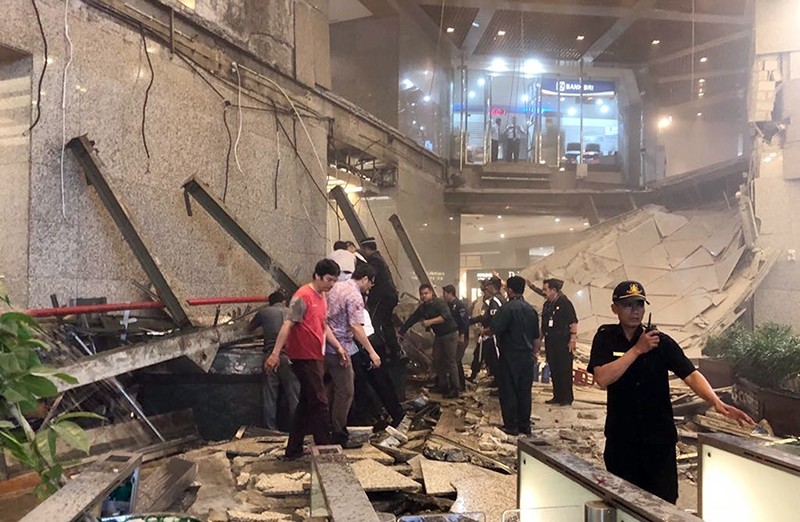 Indonesian security stand near the ruin of a structure inside the Jakarta Stock Exchange tower in Jakarta, Indonesia, Monday, Jan. 15, 2018 (AP Photo)
by Compiled from Wire Services Jan 15, 2018 12:00 am

A mezzanine floor inside the Jakarta Stock Exchange tower collapsed on Monday, injuring more than two dozen people and forcing a chaotic evacuation.

MetroTV footage showed the lobby strewn with debris and people being helped out of the building while others lay on the grass or steps outside the tower.

Wasisto ruled out terrorism as a cause of the collapse.

A spokeswoman for Jakarta's Siloam Hospital said it had received more than two dozen victims.

The spokeswoman, Triana, who uses one name, said the seriousness of the injuries of the 28 people was still being assessed.

Jakarta police spokesman Argo Yuwono said hundreds of students were visiting the stock exchange at the time of the collapse.

MetroTV said 15 ambulances were deployed to take victims to hospitals.

"The accident happened at the first floor... It's a floor where many employees are passing by... There are some victims but they have been taken to a nearby hospital," Yuwono told reporters.

He did not confirm how many people had been hurt in the accident, which took place in one of two towers in the modern complex.

Television footage showed several people lying on the ground and being carried outside the building, with crowds of panicked and screaming people being evacuated amid piles of debris.

The accident happened shortly after noon local time (0500 GMT) while the market was on its lunchtime break.

"There was a loud banging so people who were inside immediately ran outside of the building," said Metro TV journalist Marlia Zein who was on the scene.

The Indonesia Stock Exchange is located in the center of Jakarta, and the local office of the World Bank is also housed on the 12th floor of the complex, according to its website.

In 2000, powerful plastic explosives packed in the trunk of an old car caused a blast at the Exchange building, leaving 15 dead and several injured.