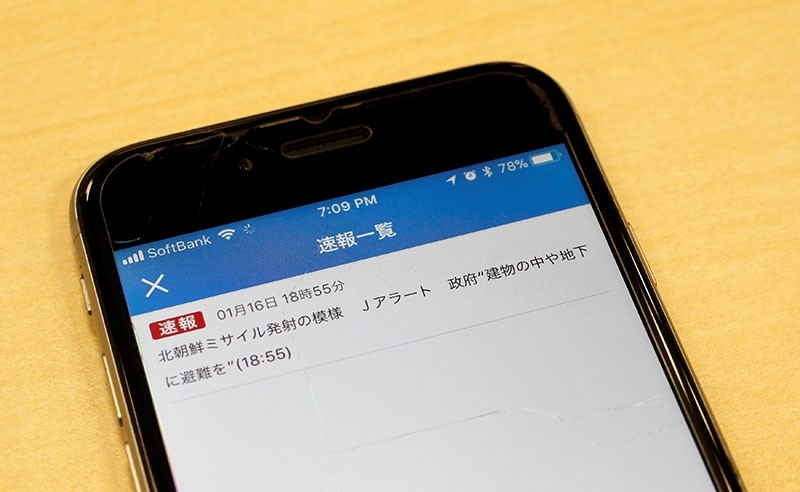 Japan's public broadcaster NHK's false alarm about a North Korean missile launch which was received on a smart phone is pictured in Tokyo, Japan Jan. 16, 2018. (Reuters Photo)
by Compiled from Wire Services Jan 16, 2018 12:00 am

Japanese public broadcaster NHK issued a false alarm about a North Korean missile launch on Tuesday, just days after a similar gaffe caused panic in Hawaii, but it managed to correct the error within minutes.

It was not immediately clear what triggered the mistake.

"We are still checking," an NHK spokesman said.

NHK's 6.55 p.m. alert said: "North Korea appears to have launched a missile ... The government urges people to take shelter inside buildings or underground."

In five minutes, the broadcaster put out another message correcting itself.

Regional tension soared after North Korea in September conducted its sixth and largest nuclear test and in November said it had successfully tested a new type of intercontinental ballistic missile that could reach all of the U.S. mainland. It regularly threatens to destroy Japan and the United States.

There were no immediate reports of panic or other disruption following the Japanese report.

Human error and a lack of fail-safe measures during a civil defense warning drill led to the false missile alert that stirred panic across Hawaii, a state emergency management agency spokesman said.

Elaborating on the origins of Saturday's false alarm, which went uncorrected for nearly 40 minutes, spokesman Richard Rapoza said the employee who mistakenly sent the missile alert had been "temporarily reassigned" to other duties.

Japan and North Korea have a tense relationship, with Pyongyang routinely issuing verbal threats as well as firing missiles near or above Japan.

"I was surprised but it was a mistake. Do your work, NHK!" urged another.

The mistake also comes less than two weeks after a fake earthquake alarm in Tokyo, where millions of residents received an alert warning them that a strong quake was about to hit the Japanese capital.

In Hawaii, the notification was sent out on Saturday, lighting up phones with a disturbing alert urging people to "seek immediate shelter."

But it took nearly 40 minutes for a corrected message to be issued -- with Hawaii's governor saying there was no automatic way to cancel the false alarm, meaning it had to be done manually.