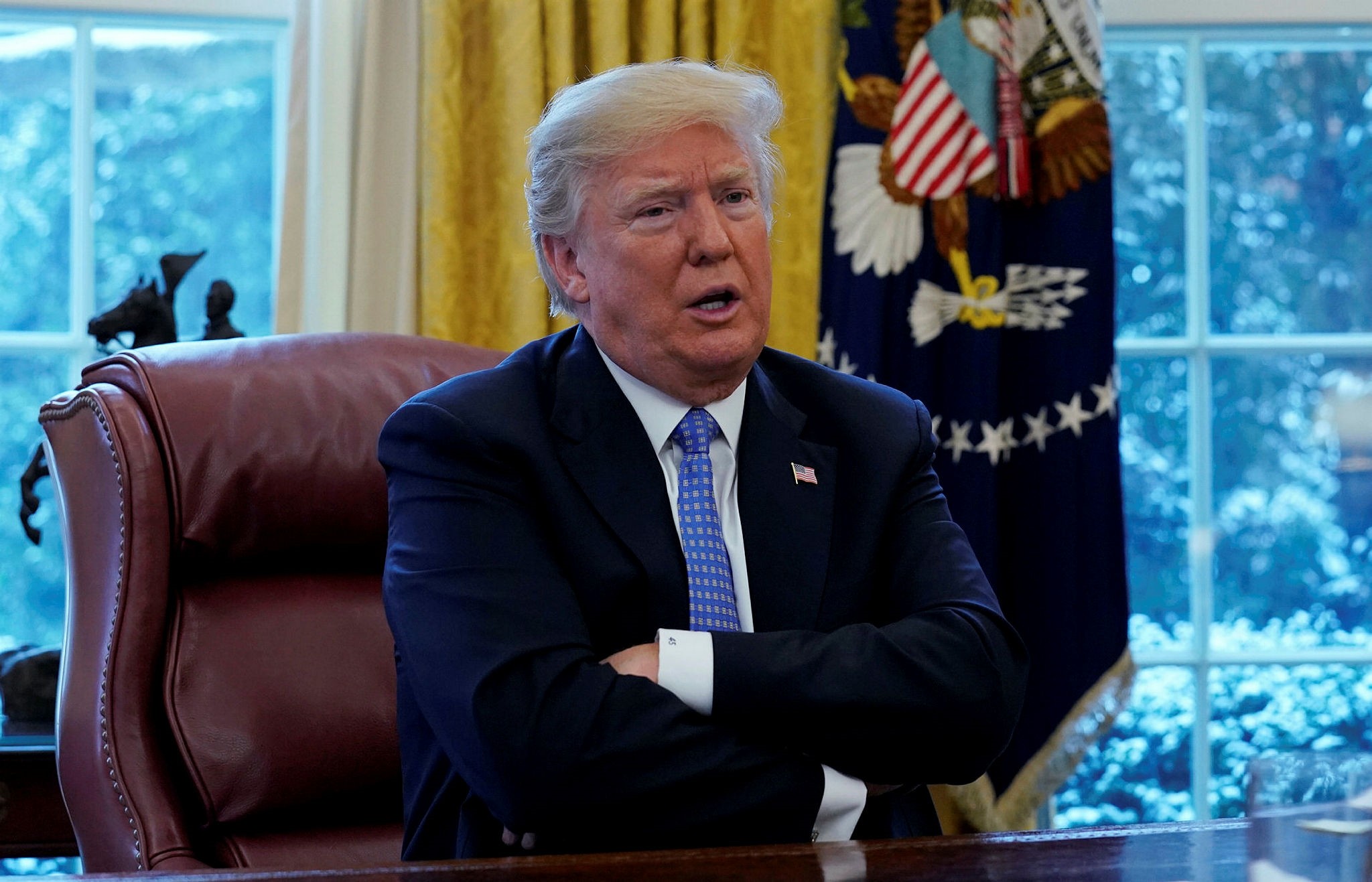 U.S. President Donald Trump said on Wednesday Russia is helping North Korea evade international sanctions and that Pyongyang is getting "closer every day" to being able to deliver a long-range missile to the United States.

"Russia is not helping us at all with North Korea," Trump said during an Oval Office interview with Reuters. "What China is helping us with, Russia is denting. In other words, Russia is making up for some of what China is doing."

China and Russia both signed onto the latest rounds of United Nations Security Council sanctions against North Korea imposed last year. There was no immediate comment from the Russian embassy in Washington on Trump's remarks.

During a 53-minute interview with a fresh Diet Coke near at hand on his desk, Trump also said he was considering a big "fine" as part of an investigation into China's alleged theft of intellectual property; that he has lost all trust in the chief Democratic Party negotiator on immigration in the Senate; and declined to clear up conflicting reports about his use of the phrase "shithole countries" in a White House meeting, which caused an international outcry.

With North Korea persisting as the major global challenge facing Trump this year, the president cast doubt on whether talks with North Korean leader Kim Jong Un would be useful. In the past he has not ruled out direct talks with Kim.

"I'd sit down, but I'm not sure that sitting down will solve the problem," he said, noting that past negotiations with the North Koreans by his predecessors had failed to rein in North Korea's nuclear and missile programs.

He blamed his three immediate predecessors, Bill Clinton, George W. Bush and Barack Obama, for failing to resolve the crisis and, a day after his doctor gave him a perfect score on a cognitive test, suggested he had the mental acuity to solve it.

"I guess they all realized they were going to have to leave it to a president that scored the highest on tests," he said.

He declined to comment when asked whether he had engaged in any communications at all with Kim, with whom he has exchanged public insults and threats, heightening tensions in the region.

Trump said he hoped the standoff with Pyongyang could be resolved "in a peaceful way, but it's very possible that it can't."

Trump praised China for its efforts to restrict oil and coal supplies to North Korea but said Beijing could do much more to help constrain Pyongyang.

The White House last week welcomed news that imports to China from North Korea, which counts on Beijing as its main economic partner, plunged in December to their lowest in dollar terms since at least the start of 2014.

'THEY GET CLOSER EVERY DAY'

But Trump said Russia appears to be filling in the gaps left by the Chinese.

Trump has repeatedly blamed a U.S. investigation into whether Russia meddled in the 2016 presidential election for hindering an improvement in U.S.-Russian relations.

"He can do a lot," Trump said of Russian President Vladimir Putin. "But unfortunately we don't have much of a relationship with Russia, and in some cases it's probable that what China takes back, Russia gives. So the net result is not as good as it could be."

Andrew Weiss, vice president for studies at the Carnegie Endowment for International Peace, said Moscow does not share the depth of U.S. concerns over Pyongyang's nuclear and missile programs. "It's simply not the case, if Trump's hands were not tied on Russia, that he and Putin could magically work together to solve the Korea crisis."

Trump, who has grappled with nuclear tests and ballistic missile launches by North Korea since he took office a year ago, said Pyongyang is steadily advancing in its ability to deliver a missile to the United States.

"They're not there yet, but they're close. And they get closer every day," said Trump.

North Korea said after its last intercontinental ballistic missile launch in November that the test had put the U.S. mainland within range. Some experts agreed that based on the missile's trajectory and distance it had the capability to fly as far as Washington D.C.

They said, however, that North Korea had not yet offered any proof that it had mastered all technical hurdles, including development of a re-entry vehicle needed to deliver a heavy nuclear warhead reliably atop an ICBM, but it was likely that it soon would. Pyongyang could reach that milestone by the end of the year, some intelligence officials said.

Trump said he welcomed talks between North and South Korea over the Winter Olympics to be held in the South next month and said this could be an initial phase in helping defuse the crisis.

"We're playing a very, very hard game of poker and you don't want to reveal your hand," he said.

Trump also gave the clearest indication yet that his administration will take retaliatory trade action against China.

Trump and his economic adviser Gary Cohn, who was also in the Oval Office, said China had forced U.S. companies to transfer their intellectual property to China as a cost of doing business there.

"We have a very big intellectual property potential fine going, which is going to come out soon," Trump said in the interview.

Trump said the damages could be high, without elaborating on how the numbers were reached or how the costs would be imposed.

Trump was also asked about a private gathering with a bipartisan group of senators last week at which he was reported to have used a vulgar term to describe Haiti and African nations. He would not confirm whether he had said "shithole countries," but described it as a "tough-talking" meeting.

He said he had "lost all trust" in Democratic Senator Dick Durbin, one of the participants who later talked publicly about Trump's comments during the meeting.

Trump criticized a proposed bipartisan deal on protecting children of illegal immigrants from deportation, calling it "horrible." A deal was still possible by a March 5 deadline but that "time is running out," he added.