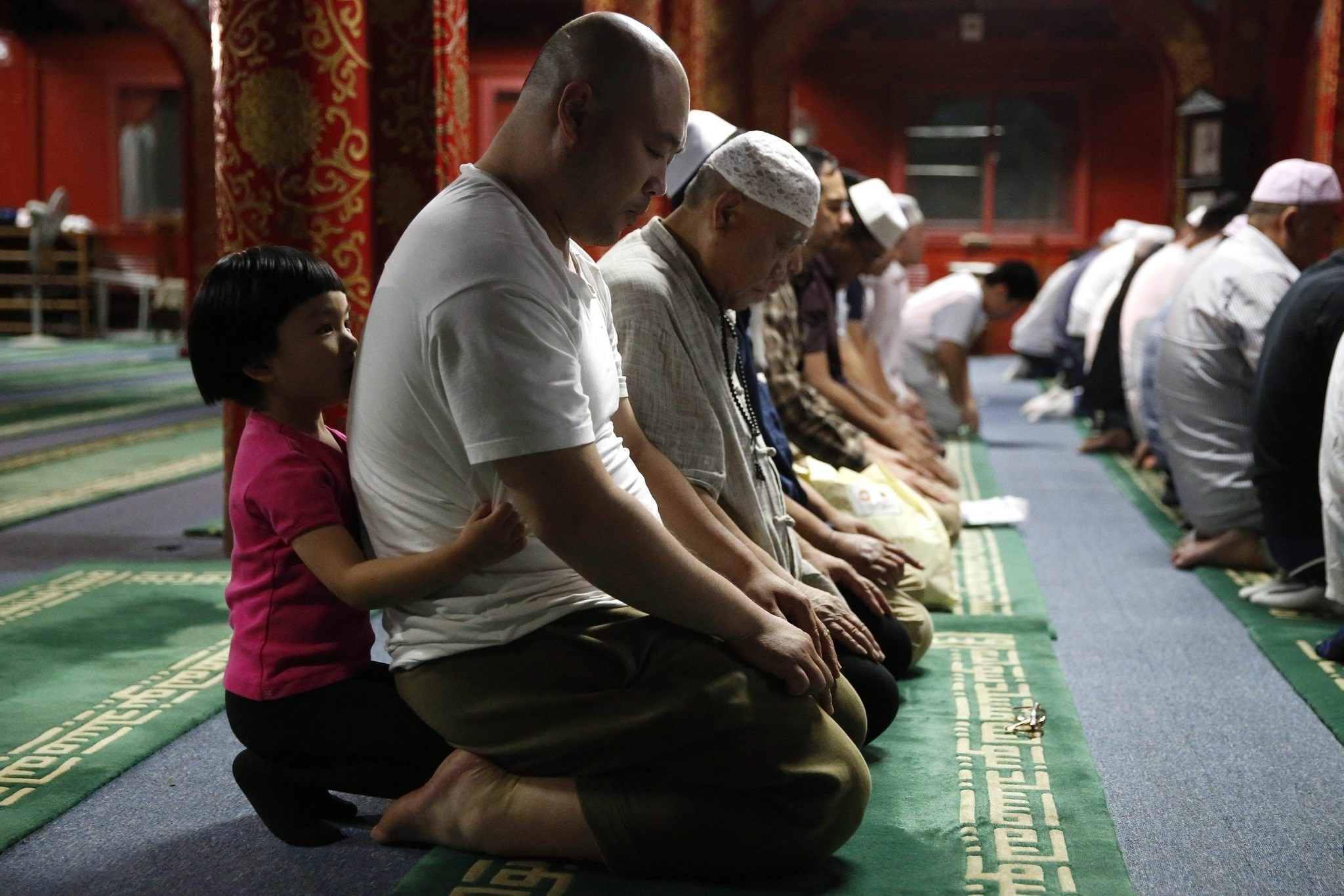 A little girl embraces a Muslim man from behind as he prays with other devotees during the evening ramadan prayers on the first day of the fasting month of Ramadan at the Niujie mosque in Beijing, China, 18 june 2015. (EPA Photo)
by Jan 19, 2018 12:00 am

Authorities in a Muslim-majority county in northwest China have banned schoolchildren from going to mosques during their winter holidays, a state-run daily reported Friday, the latest tightening of regulations on religious freedoms.

The decision was outlined in a notice sent to all high schools, primary schools and kindergartens in Gansu province's Guanghe county, according to the Global Times.

"Schools of all levels and kinds should further strengthen ideological and political work and enhance publicity work in order to inform each student and parent," it continued.

The notice was confirmed to the newspaper by the county's local publicity department. It was not clear why the restrictions were being enforced during the holidays.

Some 98 percent of Guanghe's 257,000 residents are ethnic minorities, many from the mostly Muslim Hui and Dongxiang groups, according to the county government's website.

An image of what appeared to be the notice circulated online, though AFP was unable to confirm its authenticity.

Guanghe is located within the Linxia Hui Autonomous Prefecture.

The Linxia prefecture education bureau told AFP that they had no knowledge of the matter, while the Guanghe county propaganda department hung up the phone.

In May 2016, Gansu's education bureau issued a notice stating that religious activities were forbidden in schools after a video of a kindergartener from Linxia reciting the Koran went viral, according to the Global Times.

China's officially atheist Communist authorities are wary of any organised movements outside their control, including religious ones.

Beijing has stepped up its crackdown on civil society since President Xi Jinping took power in 2012, tightening restrictions on freedom of speech and jailing hundreds of activists and lawyers.

The constitution guarantees freedom of religious belief, a principle that Beijing says it upholds.

But an annual report from the US State Department released last year said that in 2016, China "physically abused, detained, arrested, tortured, sentenced to prison, or harassed adherents of both registered and unregistered religious groups".

Beijing says it is facing a growing threat from domestic cults and radical Islam but critics have accused Beijing of a broader pattern of harassment, detention and abuse.

The mosque ban comes as authorities prepare to implement from February 1 new regulations intensifying punishments for unsanctioned religious activities and increasing state supervision of certain groups in a bid to "block extremism" and tackle what it sees as internal threats.

In China's far western Xinjiang region, the mostly Muslim Uighur population has struggled with increasingly strict curbs on their faith, including bans on beards and public prayers.