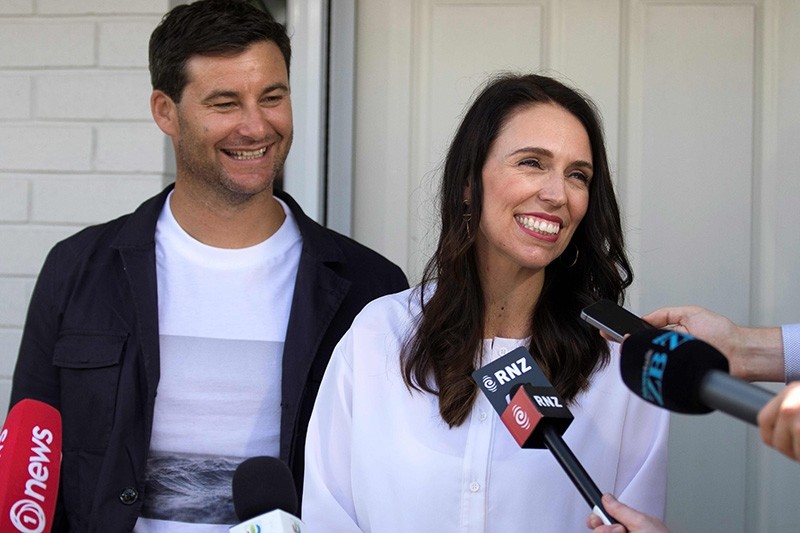 New Zealand Prime Minister Jacinda Ardern (R) and her partner Clarke Gayford announce to the press that they are expecting their first child, in Auckland on Jan. 19, 2018. (AFP Photo)
by Daily Sabah with AFP Jan 19, 2018 12:00 am

New Zealand Prime Minister Jacinda Ardern announced Friday she is expecting her first baby, and is set to become the country's first leader to give birth while in office.

The 37-year-old, who was sworn in last October, made global headlines when she slapped down pre-election questions over whether she intended to start a family, insisting pregnancy had no bearing on a woman's career opportunities.

Ardern was all smiles Friday as she appeared with partner Clarke Gayford at their home to announce the "unexpected but exciting" news of their first baby.

"Clark and I are really excited to share...that in June we are looking forward to welcoming our first child," she told reporters.

"We still have to get used to saying that out loud because we've been keeping that to ourselves for quite a long time."

The charismatic leader enjoyed a rapid rise to the top ranks of politics, winning office last year just months after taking the helm of the center-left Labour Party.

"This year we'll join the many parents who wear two hats. I'll be PM and a mum while Clarke will be 'first man of fishing' and stay at home dad."

Ardern said she would take six weeks off after the birth of her child, with maverick Deputy Prime Minister Winston Peters taking the reins of office.

She said she aimed to be "contactable and available" during the period and would resume all leadership duties when it was over.

Ardern said she and Gayford previously had doubts they could conceive.

"Clarke and I have always been clear we wanted to be parents but had been told we would need help for that to happen," she said.

She tweeted a picture of two large fishing hooks, one with a smaller hook inside it, in reference to Gayford's career as a television fishing show presenter.

Ardern's plans for a family sparked a sexism row during the election when a television host quizzed her on the issue, saying voters had a right to know before they cast their ballots.

She rejected the line of questioning as "unacceptable," saying pregnancy and child rearing should not hinder women's opportunities in the workplace.

"It is a woman's decision about when they choose to have children and it should not predetermine whether or not they are given a job or have job opportunities," she said.

While several male prime ministers have become parents in office -- including Britain's Tony Blair -- late Pakistani prime minister Benazir Bhutto is believed to have been the first head of government to have given birth during her term, when she had a baby in 1990.

Ardern said "there's no doubt times have changed" making it possible for her to juggle motherhood and a high-profile political career.

But she played down suggestions she was a trailblazer.

"I know these are special circumstances, but there are many women who would have done this well before I have."

"There are plenty of women who carved a path incrementally to make it possible for people to look upon my time in leadership and think 'yes I can do the job and be a mother.'"

"When we spoke this morning you sounded more excited than you did when you won the election!" he tweeted.

Ex-New Zealand prime minister Helen Clark, Ardern's mentor early in her career, said her former charge was in for "a super busy year."

"Every woman should have the choice of combining family & career," she tweeted.

"That a woman can be the prime minister of New Zealand and choose to have a family while in office says a lot about the kind of country we are and that we can be -- modern, progressive, inclusive and equal," he said.

New Zealand has a track record of being progressive on women's issues -- in 1893 it became the first country to give women the right to vote. Australia extended the franchise in 1902.

New Zealand didn't get its first female MP until 1933, while Australia elected two women lawmakers to its national parliament in 1943.

The country is, however, a trailblazer in terms of female PMs – Ardern is the third woman to be the country's prime minister, following in the footsteps of Helen Clark and Jenny Shipley.