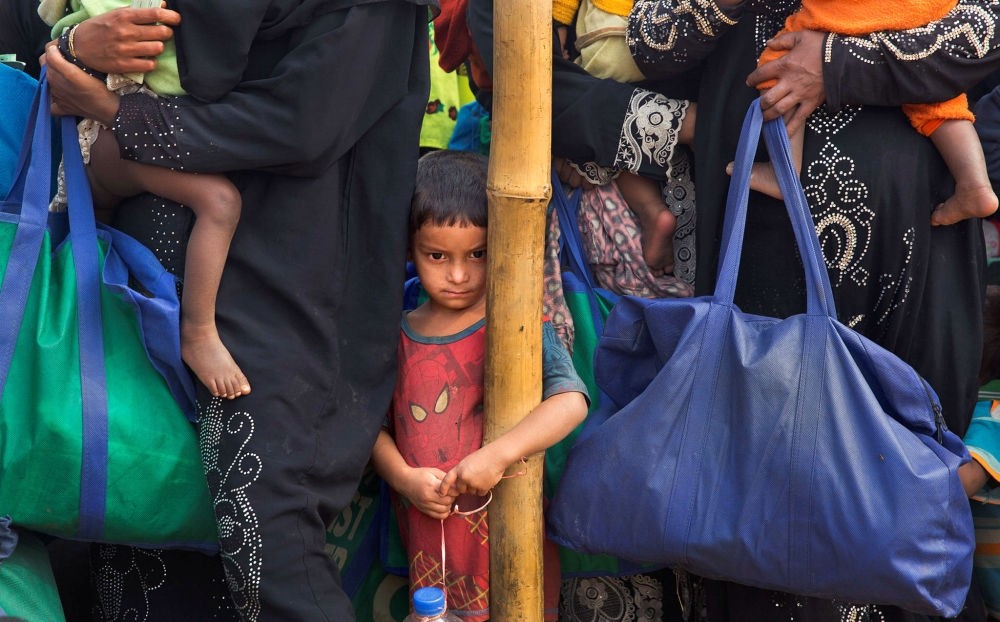 A Rohingya Muslim boy stands in a queue outside a food distribution center at Balukhali refugee camp, Bangladesh, Jan. 15.
by Compiled from Wire Services Jan 20, 2018 12:00 am

Before the start of repatriation process for Rohingya refugees back to Rakhine state expected to begin next week, hundreds of Rohingya protested Friday, demanding citizenship and guarantees of security.

"We want safe zones in Arakan [Rakhine] before repatriation," Mohibullah, a refugee and former teacher told Agence France-Presse (AFP) by phone from Cox's Bazar, where the camps are located.

"We want a U.N. peacekeeping force in Arakan. We want fundamental rights and citizenship. We do not want repatriation without life guarantees," Mohibullah said.

The protest came ahead of a visit by U.N. special rapporteur Yanghee Lee to the camps in southeastern Bangladesh where around 1 million of the Muslim minority are now living.

Rohingya leaders in a Bangladesh refugee camp have drawn up a list of demands they want Myanmar to meet before authorities begin sending back hundreds of thousands in the repatriation process, according to Reuters.

The petition is the latest indication of the challenges ahead for Bangladesh and Myanmar as they try to engineer the return of refugees who fear continued military operations in Rakhine State and are dismayed about the prospect of a prolonged stay in temporary camps in Myanmar when they go back.

A half-dozen Rohingya elders, saying they represented 40 villages from Rakhine, showed the list of demands to a Reuters reporter at the Kutupalong refugee camp, where most of the 655,500 Rohingya refugees are staying.

The petition, handwritten in Burmese, said none of the Rohingya would return to mainly Buddhist Myanmar unless the demands were met.

The petition, which has still to be finalized, demanded the Myanmar government publicly announce it is giving Rohingya long-denied citizenship and inclusion on a list of the country's recognized ethnic groups. It asks that land once occupied by the refugees be returned to them and their homes, mosques and schools rebuilt.

It wants the military held accountable for alleged killings, looting and rape, and the release of "innocent Rohingya" picked up in counter-insurgency operations from prison.

It also wants Myanmar to stop listing people with their photographs as terrorists in state media and on government Facebook pages.

Bangladesh has reached an agreement with Myanmar to send back the around 750,000 refugees who have arrived since October 2016 over the next two years, a process set to begin as early as next week.

But many Rohingya living in the crowded, unsanitary camps have said they do not want to return to Rakhine after fleeing atrocities including murder, rape and arson attacks on their homes. Rights groups and the U.N. say any repatriation must be voluntary.

They have also expressed concerns about conditions in Myanmar, where many Rohingya settlements have been burned to the ground by soldiers and Buddhist mobs.

A Bangladesh official said around 6,500 Rohingya currently living in no man's land between the two countries would be among the first to be repatriated. The repatriation deal does not cover the estimated 200,000 Rohingya refugees who were living in Bangladesh prior to October 2016, driven out by previous rounds of communal violence and military operations.