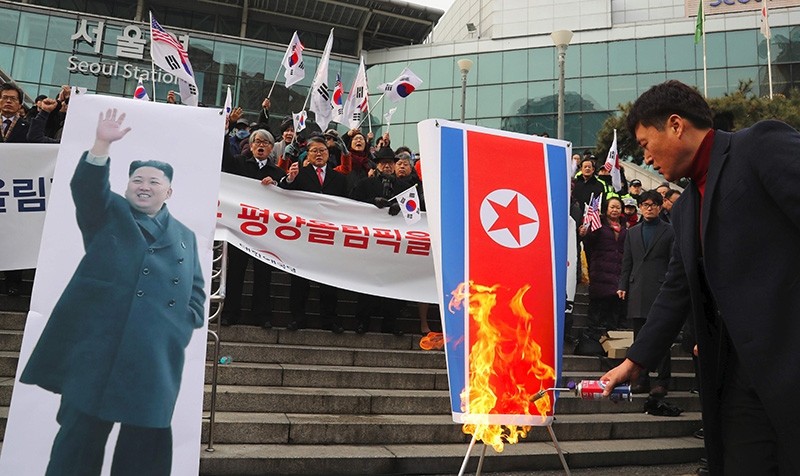 South Korea's efforts to bring the North to its Winter Olympics in Pyeongchang next month are provoking a backlash among its own people, with accusations that Seoul risks turning the Games into a "Pyongyang Olympics."

Many are fuming over what they see as exploitation of the South's own athletes for political purposes, and accusing President Moon Jae-In's government of making too many concessions to please its hostile, unpredictable neighbor.

Protesters burned an image of North Korean leader Kim Jong-Un in Seoul on Monday, along with the North's flag, even as a Pyongyang pop singer concluded a trip to the South to prepare for concerts at the time of the Games.

Seoul has long sought to promote the Games as a "Peace Olympics" that would ease tension on the flashpoint peninsula, where the North has carried out multiple missile launches in recent months, along with its most powerful nuclear test to date.

Now it is scrambling to quell public anger.

In a flurry of sporting diplomacy, the two Koreas agreed this month that the North would attend the Games, the two would march together under a unification flag at the opening ceremony, and they would form a joint female ice hockey team -- a deal approved by the IOC on Saturday.

Under the terms, 12 North Koreans will be added to the 23-strong South Korean squad, with 22 of them -- the same size as other countries' teams -- chosen to take part in each game, including at least three North Koreans.

But the deal is being widely criticized for "robbing" Southern athletes of opportunities to compete at the Olympics in a bid to stage what many describe as a hurriedly-coordinated political show.

A survey earlier this month found 73 percent of South Koreans saw no need for a joint team.

Sports should be free from politics, Seoul's conservative Dong-A daily said in an editorial on Monday, and the team coach's ability to select the team had been compromised.

"The South Korean government is focused on hosting peaceful Olympics, and says 'yes' to everything North Korea wants," it added.

Joint marches at past sporting events in the 2000s were widely hailed in the South, where civilian contact with the North is prohibited.

But sentiment has since hardened among many in the South in the face of Pyongyang's ever-accelerating weapons drive under Kim, which has seen it subjected to multiple sets of U.N. Security Council sanctions.

Seoul media live-streamed every move of the visit on Sunday and Monday of the North Korean cultural delegation led by Hyon Song-Wol, the leader of Pyongyang's Moranbong girlband.

But the trip was met with largely frosty response on the Internet, where many asked: "Is this Pyeongchang Olympics or Pyongyang Olympics?"

"The North is not only getting a free ride to the event we worked so hard to prepare but also parading this woman like a visiting queen doing us a favor," said one online user.

Many now accuse the dovish president -- who has long backed engagement with the North to bring it to the negotiating table -- of pandering to Pyongyang.

"We don't find fault with President Moon Jae-In's effort to link the Olympics to his peace initiative for the Korean Peninsula, but the government must think about why its move faces increasing public disgruntlement," Seoul's major JoongAng daily said.

The editorial, published Monday, added: "No South Korean would believe that the nuclear conundrum will be solved if the government stages a 'joint hosting' of the Games."

Moon urged South Koreans to rally behind his efforts Monday "like protecting a candle in the face of wind."

"We need wisdom and effort to sustain this momentum for dialogue, miraculously created by the Pyeongchang Olympics, even after the game is over," he told a cabinet meeting.

The comments came a day after his office defended its gestures as "necessary" to forge peace and create a much-needed buzz over a Games that have failed to stir much excitement.

"The Pyeongchang Olympics would not only achieve inter-Korea reconciliation but also offer a lead toward easing tension on the peninsula and forging peace," it said.

Some countries questioned whether it was safe to send their athletes but such concerns have largely died down following the North's announcement it would take part, Moon's office said, adding: "Having the North participate in the Olympics is an investment for the future."