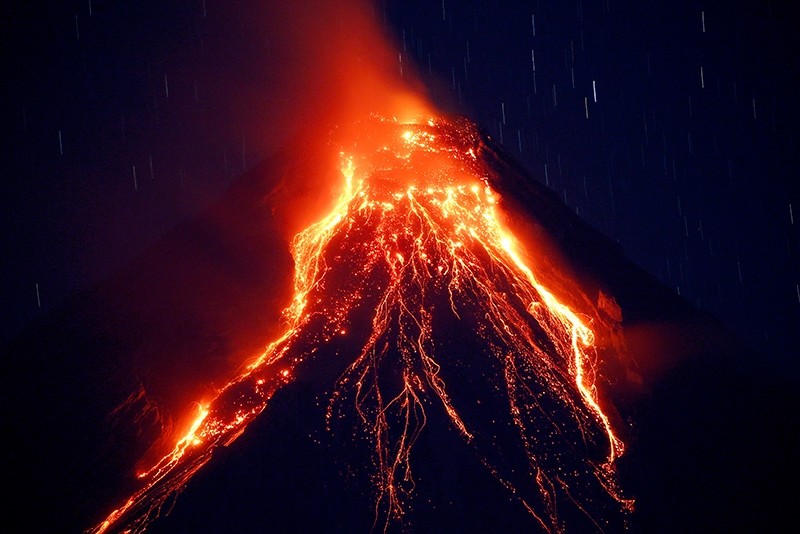 Lava cascades down the slopes of Mayon volcano during its eruption for the second straight day Tuesday, Jan. 23, 2018 as seen from Legazpi city, Albay province, southeast of Manila, Philippines. (AP Photo)
by Associated Press Jan 23, 2018 12:00 am

The Philippines' most active volcano continued to spew fountains of red-hot lava and massive ash plumes Tuesday in a dazzling but increasingly dangerous eruption that has sent 40,000 villagers to shelter in evacuation centers.

Lava fountains gushed up 700 meters (2,300 feet) above Mount Mayon's crater and ash plumes rose up to 3 kilometers (1.9 miles) at night and before daybreak, according to the Philippine Institute of Volcanology and Seismology. An explosive eruption at noon Monday was the most powerful since the volcano started acting up more than a week ago.

Authorities warned a violent eruption may occur in hours or days, characterized by more rumblings and pyroclastic flows — superheated gas and volcanic debris that race down the slopes at high speeds, vaporizing everything in their path.

After Monday's huge explosion, officials raised Mayon's alert level to four on a scale of five, and the danger zone was expanded to 8 kilometers (5 miles) from the crater, requiring thousands more residents to be evacuated, including at least 12,000 who left their homes and then returned during gentler eruptions.

Authorities struggled to prevent villagers from sneaking back to check on their homes and farms and to watch a cockfight in an arena in Albay's Santo Domingo town despite the risks and police patrols and checkpoints, said Cedric Daep, a provincial disaster-response official.

In a sign of desperation, Daep told a news conference that he has recommended electricity and water supply be cut in communities within the no-go zones to discourage residents from returning.

"If pyroclastic flows hit people, there is no chance for life," Daep said. "Let us not violate the natural law, avoid the prohibited zone, because if you violate, the punishment is death penalty."

The daytime eruptions have plunged nearby villages in darkness and sent lava, rocks and debris cascading down Mayon's slopes toward the no-entry danger zone. There have been no reports of deaths and injuries. Airplanes have been ordered to stay away from the crater and ash-laden winds and several domestic flights have been canceled.

Volcanic ash fell Monday in more than a dozen towns in coconut-growing Albay and nearby Camarines Sur province, with visibility being heavily obscured in a few towns because of the thick gray ash fall, Jukes Nunez, another Albay provincial disaster response officer, said by telephone.

"It was like night time at noon, there was zero visibility in some areas because the ash fall was so thick," Nunez said.

More than 30,000 ash masks and about 5,000 sacks of rice, along with medicine, water and other supplies, were being sent to evacuation centers, Office of Civil Defense regional director Claudio Yucot said late Monday.

Food packs, water, medicine and other relief goods remain adequate but may run out by mid-February if the eruption continues and adequate supplies fail to come on time, officials said.

With its near-perfect cone, Mayon has long been popular with climbers and tourists but has erupted about 50 times in the last 500 years, sometimes violently. The 8,070-foot (2,460-meter) volcano has generated tourism revenues and jobs in Albay, which lies about 340 kilometers (210 miles) southeast of Manila.

In 2013, an ash eruption killed five climbers who had ventured near the summit despite warnings. Its most destructive eruption, in 1814, killed more than 1,200 people and buried the town of Cagsawa in volcanic mud. The belfry of Cagsawa's stone church still juts from the ground in an eerie reminder of Mayon's fury.

The Philippines, which has about 22 active volcanoes, lies in the "Ring of Fire," a line of seismic faults surrounding the Pacific Ocean where earthquakes and volcanic activity are common.

In 1991, Mount Pinatubo in the northern Philippines exploded in one of the biggest volcanic eruptions of the 20th century, killing about 800 people, covering entire towns and cities in ash and partly prompting the U.S. government to abandon its vast air and naval bases on the main northern Luzon island.