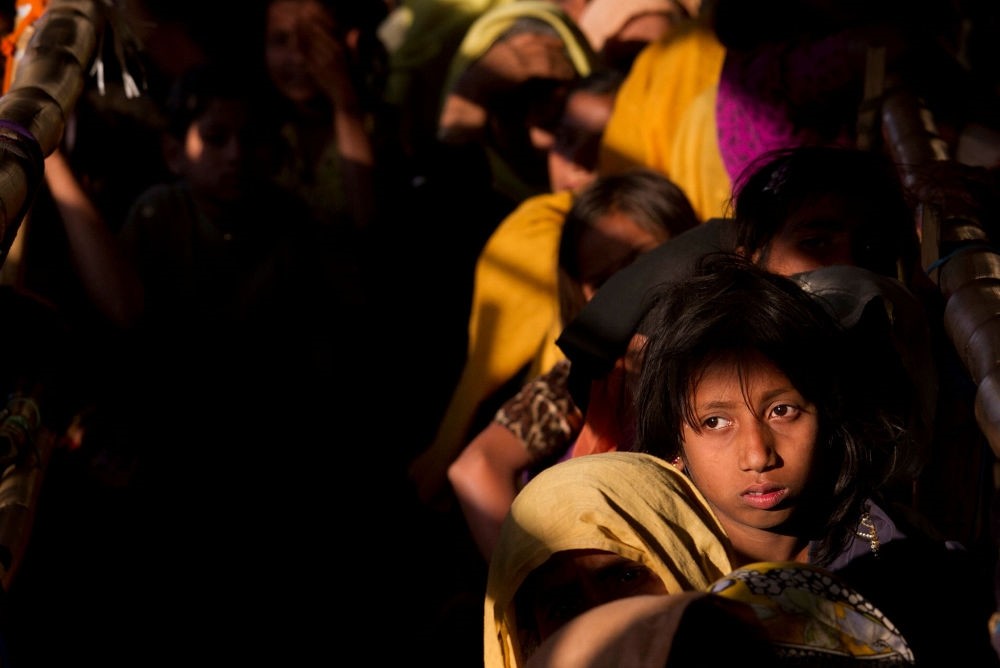 Rohingya refugees wait in a line to receive relief material at the Balukhali refugee camp near Cox's Bazar, Bangladesh, Jan. 27.
by Compiled from Wire Services Feb 02, 2018 12:00 am

More than five mass graves, all previously unreported by the Myanmar military, have reportedly been confirmed, revealing violent atrocities against Rohingya Muslims bearing the 'hallmarks of genocide'

The U.N. special human rights envoy in Myanmar said Thursday that the Myanmar military's violent operations against Rohingya Muslims bear "the hallmarks of genocide."Yanghee Lee told reporters in Seoul, where she is based, that she couldn't make a definitive declaration about genocide until a credible international tribunal or court had weighed the evidence, but "we are seeing signs and it is building up to that."Lee also accused Myanmar of an "established pattern of domination, aggression and violations against ethnic groups" and said while the Rohingya exodus has rightly provoked international outrage, Lee said, "for many in Myanmar, [it has] elicited a tragic feeling of déjà vu."

Abuses against ethnic populations in Myanmar's Kachin and Shan states had also continued for decades, her report stated, with accounts of killings and displacement of civilians at the hands of the country's military continuing up until this month. The Myanmar government barred Yanghee Lee from the country, claiming she was biased.

The U.N. defines genocide as acts intended to destroy a national, ethnic, racial or religious group in whole or in part. A U.N. convention requires all countries to act to halt genocide and to punish those responsible. The U.N. rights chief earlier called for a fresh international investigation into Myanmar's abuses against its Rohingya Muslim minority, warning of possible "elements of genocide."

The graves are the newest piece of evidence for what looks increasingly like a genocide in Myanmar's western Rakhine state against the Rohingya, a long-persecuted ethnic Muslim minority in the predominantly Buddhist country.

At least five mass graves, all previously unreported, have been confirmed by The Associated Press (AP) through multiple interviews with more than two dozen survivors in Bangladesh refugee camps and through time-stamped cellphone videos. The Myanmar government regularly claims such massacres of the Rohingya never happened, and has acknowledged only one mass grave in the village of Inn Din. However, the AP's reporting shows a systematic slaughter of Rohingya Muslim civilians by the military, with help from Buddhist neighbors, and suggests many more graves hold many more people.

According to U.N. estimates, nearly 700,000 Rohingya Muslims crossed into Bangladesh after the Myanmar army launched a crackdown on suspected Muslim insurgents blamed for carrying out attacks on security posts in restive Rakhine state on Aug. 25.

The stateless Rohingya have been the target of communal violence and vicious anti-Muslim sentiment in mainly Buddhist Myanmar for years. Myanmar has denied citizenship to the Rohingya since 1982, and excludes them from the 135 ethnic groups it officially recognizes, which effectively renders them stateless. They have long faced discrimination and persecution with many Buddhists in Myanmar calling them "Bengalis" and saying they migrated illegally from Bangladesh, even though they have lived in the country for generations.