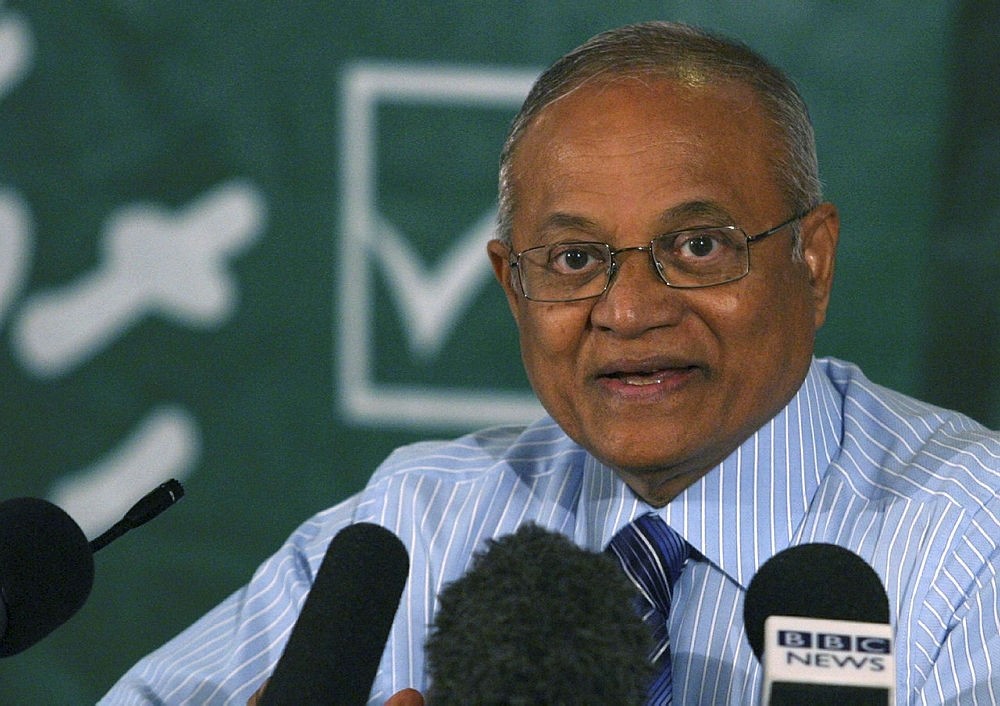 Maldives President Abdulla Yameen declared a 15-day state of emergency in the honeymoon islands on Monday, before heavily armed troops stormed the country's top court and a former president was arrested in a deepening political crisis.

The tiny tourist archipelago has been plunged into chaos recently, with the president pitted against the Supreme Court after he refused to comply with its Thursday order to release nine political dissidents.

The tense standoff comes amid a years-long government crackdown on dissent that has battered the image of the upmarket holiday paradise, with the president jailing almost all the political opposition since he came to power in 2013.

On Monday, Maldives police arrested Yameen's estranged half-brother and former president Maumoon Abdul Gayoom, who had sided with the main opposition and was campaigning against him.

The 80-year-old, who was president for 30 years until the country's first democratic elections in 2008, was taken away from his home in the capital Male around midnight on Monday, according to a tweet from his daughter Yumna Maumoon.

Shortly before he was taken in by the police, Gayoom also recorded a video message posted on Twitter to his supporters.

"I have not done anything to be arrested," he said. "I urge you to remain steadfast in your resolve too. We will not give up on the reform work we are doing."

Heavily armed troops and police special operations units had earlier stormed the Supreme Court building where Chief Justice Abdulla Saeed and others were sheltering, the court said on Twitter, though their fate was not immediately clear.

Hundreds of people had gathered outside the courts complex and police used pepper spray to disperse the crowds.

The court's shock move on Thursday had also ordered the government to restore the seats of 12 legislators sacked for defecting from Yameen's party, giving the opposition the majority in the assembly, meaning they could potentially impeach the president.

A defiant government -- which has since ordered police and troops to resist any attempt to arrest or impeach Yameen -- said Monday the court was not above the law.

"The Supreme Court ruling stands in defiance of the highest authority in the country: the constitution," government spokesman Ibrahim Hussain Shihab said in a statement.

"The Supreme Court must remember that it too is bound by law."

He said the government would "facilitate calm" and ensure the safety of all citizens and tourists "throughout this unusual period."

In a stunning blow to the regime, the court's Thursday decision also paved the way for exiled former president Mohamed Nasheed -- the first to be democratically elected but who was controversially convicted of terrorism in 2015 -- to run for president this year.

Yameen, who has faced several unsuccessful opposition attempts to impeach him for alleged corruption, responded by shuttering parliament and on Monday his aide Azima Shukoor announced the state of emergency on national television.

"The reason for the declaration is that the Supreme Court's ruling was obstructing the functioning of the government," Azima said.

The emergency declaration gives sweeping powers to security forces to arrest and detain individuals, curtails the powers of the judiciary and bars parliament from impeaching Yameen.

But it must be officially conveyed to parliament within two days, according to officials.

Nasheed, who has expressed fears of unrest in the troubled Indian Ocean nation, said the declaration amounted to martial law, as another opposition legislator called it "a desperate move" by the regime.

"(This) is tantamount to a declaration of martial law in the Maldives," Nasheed said in a statement, while urging regional super power India to intervene.

Opposition legislators have also urged the international community to pressure Yameen into respecting the court.

"We request the international community, including India, Sri Lanka, the US, Britain, the EU ... to do everything in their power to help return power to the people of the Maldives and restore democracy," they said.

Neighboring India has asked its nationals to defer all non-essential travel to the archipelago, saying that the law and order situation in the country was a matter of concern.

The United Nations, Australia, Britain, Canada, India and the United States have previously welcomed the court's decision, while UN Secretary General Antonio Guterres at the weekend called for "restraint" as the crisis escalated.

But strongman Yameen has remained defiant, staging a rally late Sunday with hundreds of supporters in the capital Male.