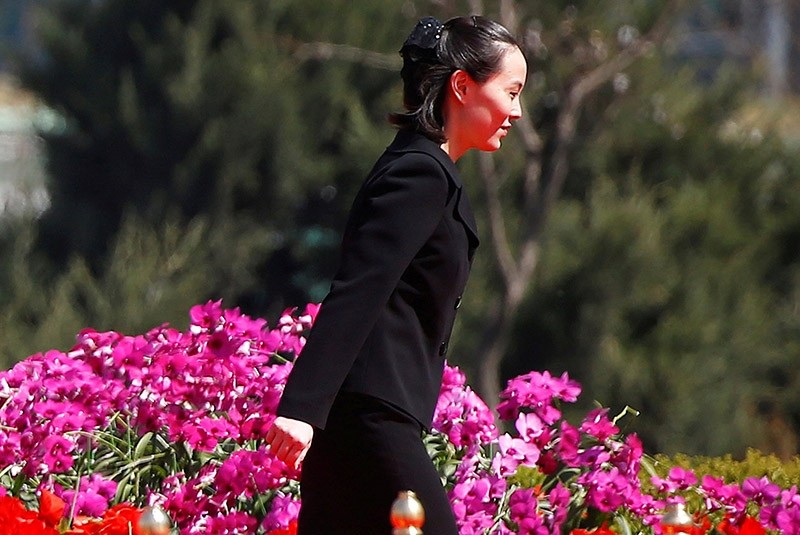 The sister of North Korean leader Kim Jong Un will visit the South this week for the Pyeongchang Winter Olympics, Seoul said Wednesday -- the first member of its ruling family ever to do so.

Pyongyang notified Seoul that Kim Yo Jong would be accompanying Kim Yong Nam, North Korea's nominal head of state, along with two other senior officials, to attend the opening ceremony of Games on Friday, according to the South's Unification Ministry.

The announcement shows Pyongyang's resolve to defuse tensions on the Korean peninsula as Kim Yo Jong is the sister of the leader and has a significant position in the ruling Workers' Party, Blue House spokesman Kim Eui-kyeom told a news briefing.

The two Koreas have been divided by the Demilitarized Zone since the end of the Korean War in 1953, and Pyongyang's pursuit of nuclear weapons have seen it subjected to multiple rounds of United Nations Security Council sanctions.

Tensions soared last year as the North carried out multiple weapons tests, including intercontinental ballistic missiles capable of reaching the US mainland, and by far its most powerful nuclear test to date.

But the Olympics have triggered a rapid rapprochement on the peninsula.

"It is highly significant that a member of the Kim family is coming to the South for the first time in history," said professor Yang Moo-Jin of the University of North Korean Studies in Seoul.

She was likely to meet South Korean President Moon Jae-In and give him a personal letter from her brother, expressing his hopes for a successful hosting of the Olympics and desire to improve inter-Korean ties, he added.

"This will mark Kim Yo-Jong's debut on the international stage," Yang told AFP. "She is being groomed as one of the North's most powerful figures by her brother."

Kim Yo-Jong, believed to be aged about 30, was promoted in October to be an alternate member of the party's powerful politburo, the decision-making body presided over by her brother.

She has frequently been seen accompanying her brother on his "field guidance trips" and other events and is known to have been involved in the party's propaganda operations.

The North has always kept its leadership within the family -- Kim Jong Un is the third generation of the dynasty to lead the country, after his father Kim Jong-Il and grandfather Kim Il-Sung, the North's founder.

But other family members have not fared so well -- Kim Jong Un's uncle was executed for treason two years after the younger man came to power, and his half-brother was assassinated in a Malaysian airport last year.

The delegation's three-day trip will be the diplomatic high point of the rapprochement between the two Koreas triggered by the Pyeongchang Olympics in the South, which have their opening ceremony on Friday -- although analysts warn that their newly warmed relations may not last long beyond the Games.

For months Pyongyang ignored Seoul's entreaties to take part in a "peace Olympics", until Kim Jong Un indicated his willingness to do so in his New Year speech.

That set off a rapid series of meetings which saw the two agree to march together at the opening ceremony and form a unified women's ice hockey team, their first for 27 years.

Officially the delegation will be headed by Kim Yong-Nam, who leads the presidium of the Supreme People's Assembly, the North's rubber-stamp parliament.

He is regarded as the ceremonial head of state, and will technically be the most senior official from the North ever to travel to the South.

But he is largely considered a figurehead whose public diplomatic role leaves it unclear how much political power he really has.

He previously led the North's delegations to the 2008 Beijing Olympics and 2014 Sochi Winter Olympics, but does not hold the title of national president -- and nor does Kim Jong Un.

Instead it is retained by Kim Il-Sung, who remains Eternal President of the Democratic People's Republic of Korea -- the country's official name -- despite dying in 1994.

Also in the delegation will be Ri Son-Gwon, who as head of the Committee for the Peaceful Reunification of the Country is the equivalent of the South's unification minister, responsible for inter-Korean affairs.

They were part of a 280-strong delegation, led by Sports Minister Kim Il Guk, which also included sports officials, 26 taekwondo athletes and journalists, the Seoul's Ministry of Unification said.

The cheerleaders follow Tuesday's arrival of North Korea's Samjiyon orchestra, which will make two appearances at the Games.

North Korea has already sent a 46-member delegation that includes 22 athletes, and will compete in a combined women's ice-hockey team at the Games.