US to unveil 'toughest' sanctions against North Korea, Pence says 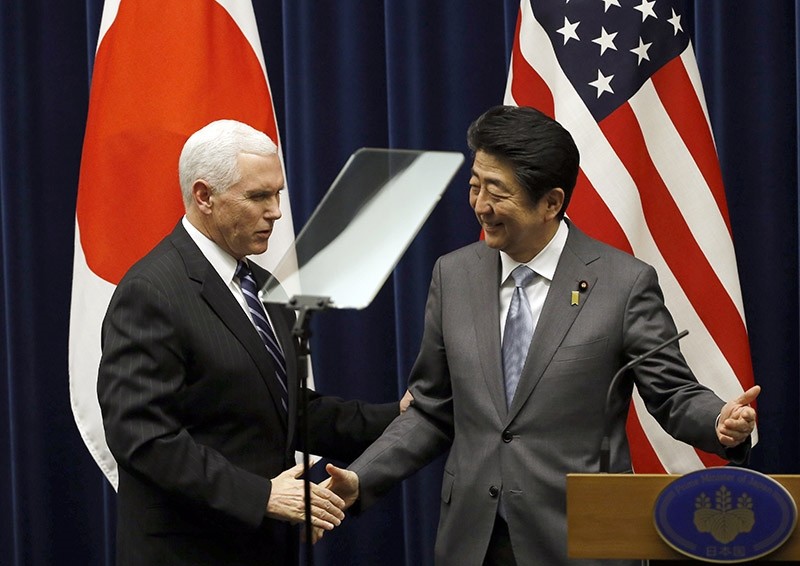 U.S. Vice President Mike Pence said his country will roll out the "most aggressive" economic sanctions against North Korea.

"The United States of America will soon unveil the toughest and most aggressive round of economic sanctions on North Korea ever," Pence said after holding talks with Japanese Prime Minister Shinzo Abe in Tokyo.

"We will continue to isolate North Korea until it abandons its nuclear and ballistic missile programs once and for all," he added.

Calling North Korea the "most tyrannical and oppressive regime on the planet," Pence said the United States and its allies including Japan would keep maximum pressure on Pyongyang until it took steps toward "complete, verifiable and irreversible" denuclearization.

Pence's three-day visit to Japan came as Washington seeks to bolster ties with its allies in the region and maintain pressure on the regime in Pyongyang despite a recent thaw on the peninsula.

"All options are on the table and the US has deployed some of our most advanced military assets to Japan and the wider region to protect our homeland and our allies and we will continue to," vowed Pence.

To highlight what Washington calls the regime's human rights "abuses", the vice president will attend the opening ceremony of the Pyeongchang Olympics with the father of the late former North Korea prisoner Otto Warmbier.

The U.S. and North Korea have been locked in a fierce war of words.

But Kim has taken a more conciliatory tone in 2018, calling for detente with the South Koreans and accepting an invitation for his country to participate in what is being billed as the "peace Olympics."

The two Koreas held a rare high-level meeting last month and the North's ceremonial head of state is due to arrive Friday, the highest-ranking Pyongyang official ever to visit the South.

Nevertheless, the peninsula remains tense, with the North slamming anti-Pyongyang activists who protested against its participation as a "spasm of psychopaths."

For his part, Abe said that Japan and the U.S. had "confirmed... that we can never accept a nuclear-armed North Korea."

Abe added that the allies would urge other countries not to be "captivated by the charm offensive of North Korea."

En route to Japan, Pence declined to rule out a meeting with the North Korean delegation also attending the opening ceremony, offering the faintest hope of a diplomatic breakthrough.

"I have not requested a meeting, but we'll see what happens," Pence said during a stop in Alaska.

However, he appeared to take a tougher line in Tokyo, saying that North Korea must not be allowed to "hijack the message and imagery of the Olympic Games."

"We will not allow North Korea to hide behind the Olympic banner the reality that they enslave their people and threaten the wider region," he said.

It is not clear how long any respite in tensions will last after the Games, especially when the United States and South Korea resume their delayed joint annual military exercises, a perennial irritant for Pyongyang.

North Korea's official KCNA news agency warned on Tuesday the resumption of the drills will throw the Korean peninsula back to "the grim phase of catastrophe".

Earlier Wednesday, Pence inspected Japan's missile defense system and stressed the "unwavering" commitment to what he called a "critical" alliance.

He will address troops at a U.S. air base outside Tokyo on Thursday before heading on to South Korea.