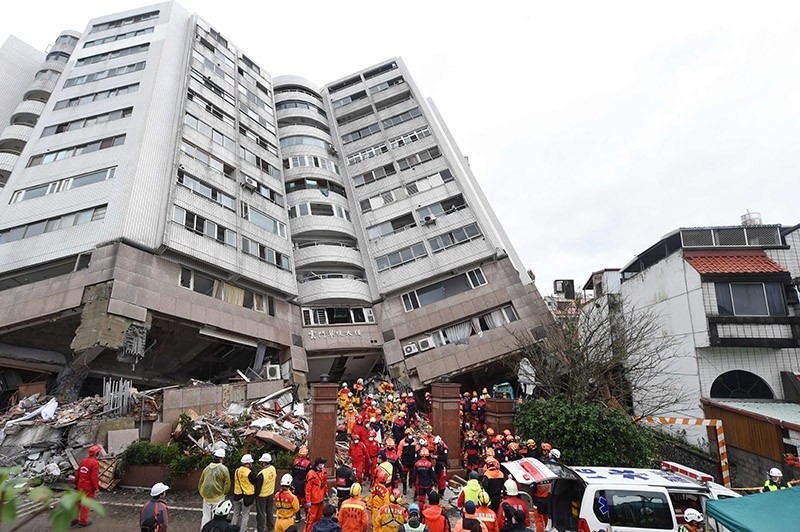 Rescuers (C) working on the recovery of a body rush out during an aftershock from a building leaning at a precarious angle in Hualien on February 8, 2018 after the city was hit by a 6.4-magnitude quake late on February 6. (AFP Photo)
by reuters
Feb 08, 2018 12:00 am

Scores of aftershocks hampered rescue efforts on Thursday as emergency personnel combed through collapsed buildings in search of survivors after a powerful earthquake killed at least 10 people near Taiwan's popular tourist city of Hualien.

The coastal city of Hualien was hit by a magnitude 6.4 quake just before midnight (1600 GMT) on Tuesday that also injured 265 people. Four buildings collapsed, officials said, and about 58 people were still missing.

Nervous residents endured more than 200 aftershocks, including a 5.7 quake late on Wednesday and smaller tremors early on Thursday. Aftershocks with a magnitude of at least 5.0 could rock the island over the next two weeks, the government said.

"There were constant aftershocks so I didn't really dare stay at home. The area around my house is actually not that bad, the houses are all OK but, because of the aftershocks, I don't really want to stay there," said Hualien resident Yang Yantin.

A Reuters witness said people rushed out of a residential building and rescue workers looked up from piles of debris after another strong aftershock rattled the city at around 11 a.m. on Thursday (0300 GMT).

Horns sounded to warn people to leave buildings and chanting from groups of Buddhists could also be heard.

It was initially feared as many as 150 people may have been missing in the rubble. The death toll had been put at seven overnight.

Many of the missing were believed to be trapped in a 12-storey residential building that was tilting at a 45-degree angle. Tenants and their furniture were flung across their apartments in the damaged building.

More than 600 soldiers and 1,300 police have been deployed to help with rescue efforts. The government said three mainland Chinese were among the dead.

Chen Deming, president of China's Association for Relations Across the Taiwan Strait, said the mainland was willing to assist with relief efforts, including sending teams to the island.

Rescue workers used ladders and flash lights as they searched for survivors among the rubble on Thursday.

More than 800 people sought refuge in shelters overnight, many too scared to stay in their homes as aftershocks stirred panic.

Hualien is home to about 100,000 people. Its streets were buckled by the force of the quake, with large cracks along major roads.

"I've never actually experienced an earthquake before but I'd heard people say that there were often earthquakes here, so at first I didn't really react, but later when all the lights started smashing - the floor was covered in glass - that is when I realized it was really serious," said tourist Zhang Hongcong.

Taiwan, a self-ruled island that China considers part of its territory, lies near the junction of two tectonic plates and is prone to earthquakes. An earthquake with a magnitude of 6.1 struck nearby on Sunday.

More than 100 people were killed in a quake in southern Taiwan in 2016, and some Taiwanese remain scarred by a 7.6 magnitude quake that was felt across the island and killed more than 2,000 people in 1999.