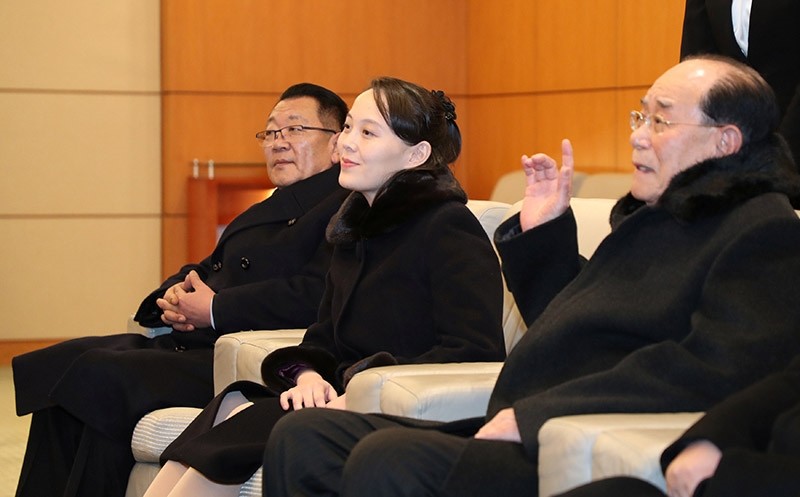 The sister of the North Korean leader on Friday became the first member of her family to visit South Korea since the 1950-53 Korean War as part of a high-level delegation attending the opening ceremony of the Pyeongchang Winter Olympics.

Arriving on her brother Kim Jong Un's white private jet for a three-day visit, Kim Yo Jong and the country's 90-year-old nominal head of state Kim Yong Nam are scheduled to meet with South Korean President Moon Jae-in on Saturday in a luncheon at Seoul's presidential palace.

Dressed in a black coat, carrying a black shoulder bag and hit with a barrage of camera flashes, Kim Yo Jong smiled as a group of South Korean officials, including Unification Minister Cho Myoung-gyon, greeted her and the rest of the delegates at a meeting room at Incheon International Airport.

The North Koreans — also including Choe Hwi, chairman of the country's National Sports Guidance Committee, and Ri Son Gwon, chairman of the North's agency that deals with inter-Korean affairs — then moved down a floor on an escalator to board a high-speed train to Pyeongchang.

Moon has been trying to use the games as an opportunity to revive meaningful communication with North Korea after a period of diplomatic stalemate and eventually pull it into talks over resolving the international standoff over its nuclear program.

Skeptics say North Korea, which is unlikely to give up its nukes under any deal, is just using the Olympics to poke holes at the U.S.-led international sanctions against the country and buy more time to further advance its strategic weaponry. The North Korean delegation's arrival came a day after Kim Jong Un presided over a massive military parade in Pyongyang that was highlighted by the country's developmental intercontinental ballistic missiles, which in three flight tests last year showed potential ability to reach deep into the U.S. mainland when perfected.

South Korean media have been speculating about whether Kim will send a personal message to Moon through his sister and, if so, whether it would include a proposal for a summit between the two leaders.

Kim Yo Jong, believed to be around 30, is the first member of North Korea's ruling family to visit the South since the Korean War.

As first vice director of the Central Committee of North Korea's ruling Workers' Party, Kim has been an increasingly prominent figure in North Korea's leadership and is considered one of the few people who has earned her brother's absolute trust.

Analysts say the North's decision her to the Olympics shows an ambition to break out from diplomatic isolation and pressure by improving relations with the South, which it could use as a bridge for approaching the United States.

By sending a youthful, photogenic person who will undoubtedly attract international attention during the games, North Korea may also be trying to craft a fresher public image and defang any U.S. effort to use the Olympics to highlight the North's brutal human rights record.

South Korea has yet to announce a confirmed schedule for the North Korean delegates aside of their participation in the opening ceremony and Saturday's luncheon with Moon.

There's a possibility that they would attend the debut of the first-ever inter-Korean Olympic team at the women's ice hockey tournament on Saturday, hours after their meeting with Moon. They could also see a performance by a visiting North Korean art troupe in Seoul on Sunday before heading back to Pyongyang.

The North has sent nearly 500 people to the Pyeongchang Games, including officials, athletes, artists and also a 230-member state-trained cheering group after the war-separated rivals agreed to a series of conciliatory gestures for the games.

Moon, a liberal whose presidential win in May last year ended a decade of conservative rule in Seoul, has always expressed a willingness to reach out to the North. His efforts received a boost when Kim Jong Un in his New Year's Day speech called for improved ties between the Koreas and expressed willingness to send athletes to Pyeongchang.

This led to a series of talks where the Koreas agreed to have its delegates jointly march during the opening ceremony under a blue-and-white "unification" flag and field a combined team in women's ice hockey. A North Korean art troupe also performed in Gangneung on Thursday and will perform in Seoul on Sunday before heading back home.

Critics say that South Korea while cooperating with its rival over the Olympics allowed itself to play into the hands of the North which is apparently trying to use the games to weaken sanctions.

South Korea allowed the North to use a 9,700-ton ferry to transport more than 100 artists to perform at the Olympics, treating it as an exemption to maritime sanctions it imposed on its rival, and is now considering whether to accept the North's request to supply fuel for the ship.

While neither Kim Yo Jong nor Kim Yong Nam are among the North Korean officials blacklisted under U.N. sanctions, the U.S. Treasury Department last year included Kim Yo Jong on its list of blacklisted officials over her position as vice director of the ruling Workers' Party's Propaganda and Agitation Department.

The U.N. committee monitoring sanctions against North Korea has proposed granting an exemption for Choe, who has been on the U.N. sanctions blacklist since last June.