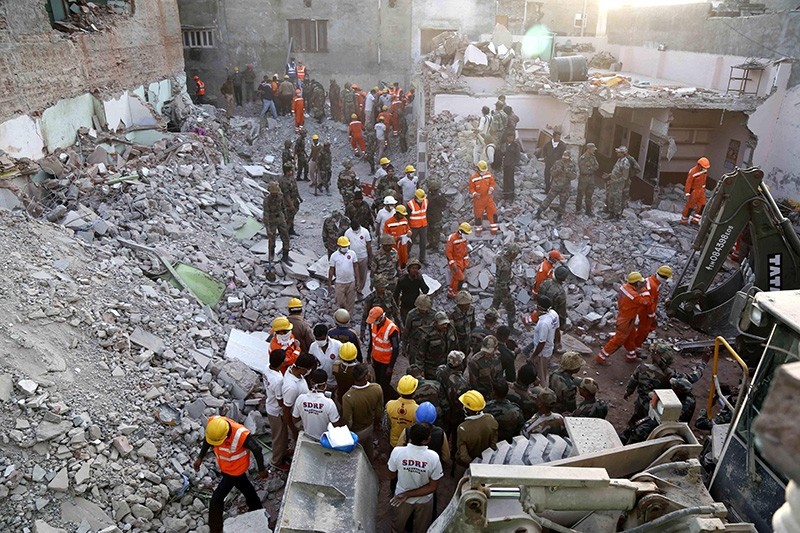 Indian Army, NDRF and SDRF personnel carry out rescue work after a building collapsed due to a gas cylinder blast during wedding party in Beawar, in the Indian state of Rajasthan (AFP Photo)
by Feb 18, 2018 12:00 am

Rescuers discovered nine more bodies Sunday beneath the ruins of a Indian hotel, bringing the known death toll from an explosion which tore through a wedding party to 18, an official said.

A gas cylinder exploded late Friday at the hotel in the city of Beawar, in the western state of Rajasthan, reducing the venue to ruins and sparking a huge fire.

By Saturday evening officials said nine bodies had been found.

But the figure rose sharply Sunday as rescue teams, aided by the army, found nine more victims including women and children under rubble.

"So far 18 bodies have been recovered," said Gaurav Goyal, a senior administrative official in Ajmer, the district where the blast occurred, about 200 kilometres from the state capital Jaipur.

"Five seriously injured people, with severe burn injuries, are being treated in hospital," he told AFP.

Recovery teams were sifting through mangled heaps of concrete and steel, removing victims on stretchers covered with white sheets.

The blast all but levelled the three-storey hotel where a wedding was underway. Eyewitnesses told local broadcaster NDTV the explosion occurred as a chef tried to refill a cooking canister.

Rajasthan Chief Minister Vasundhara Raje visited survivors in hospital late Saturday and announced compensation of 200,000 rupees ($3,106) each for the families of the dead.

"The cylinder blast at the wedding ceremony at Beawar is nothing less than a nightmare," she said on Twitter.

Domestic gas cylinder explosions are common in India, where safety standards are relatively poor. Reports of fatal accidents from cylinder blasts are frequent but mass casualties are unusual.