Australian politician under fire over threatening gun photo on Facebook 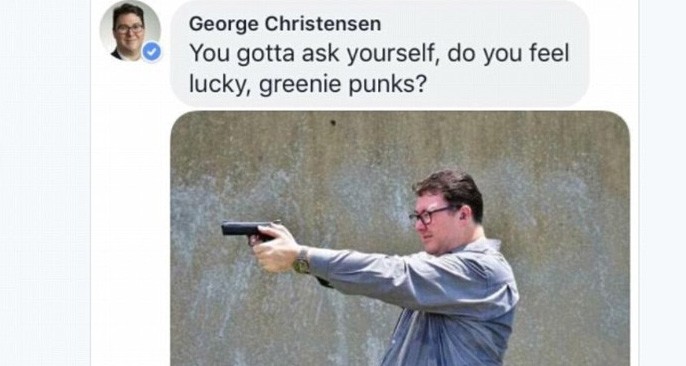 A conservative Australian politician who posted a photo of himself on Facebook holding a gun in a jibe at environmentalists was reported to police and slammed Monday as insensitive after a mass US school shooting.

George Christensen put up the image on Saturday showing him in a shooting stance with the comment "You gotta ask yourself, do you feel lucky, greenie punks?".

He claimed it was a tongue-in-cheek reference to the "Dirty Harry" film franchise in which a police officer played by Clint Eastwood takes on "people who are conducting illegal activity, such as the greens are".

The MP has been critical of environmentalists, sometimes backed by the Greens political party, who have tried to blockade mining projects, including chaining themselves to machinery.

The Facebook post was referred to the Australian Federal Police by the Greens, with their Senator Sarah Hanson-Young saying on Twitter she had received an emailed threat from one of Christensen's supporters.

"Frankly, guns are not a joke and particularly in the wake of the massacre in the US only last week, 17 people shot dead, including children," Hanson-Young told the Australian Broadcasting Corporation.

Prime Minister Malcolm Turnbull called the post "very inappropriate". It was also widely criticized by politicians from other parties.

Christensen, whose National party is the junior partner in the government's ruling coalition, later deleted it but responded defiantly, saying: "I'm not going to be moralized to by these extreme greens who put the livelihoods, safety and lives of other people at risk."

He said the post had nothing to do with the American shooting last week where a 19-year-old killed 17 people at his former high school, claiming instead it was a comment on environmentalists' "illegal activism on mine sites".

Australia has tough gun laws that include bans on certain weapons, a minimum age, licenses and secure storage, after a mass shooting at the historic Tasmanian colonial convict site of Port Arthur in 1996 where 35 people were killed.

The uproar is the latest headache for the ruling Liberal-National coalition, with Turnbull last week publicly criticizing Nationals leader Barnaby Joyce for his affair with a younger former staffer who is now pregnant with his child.