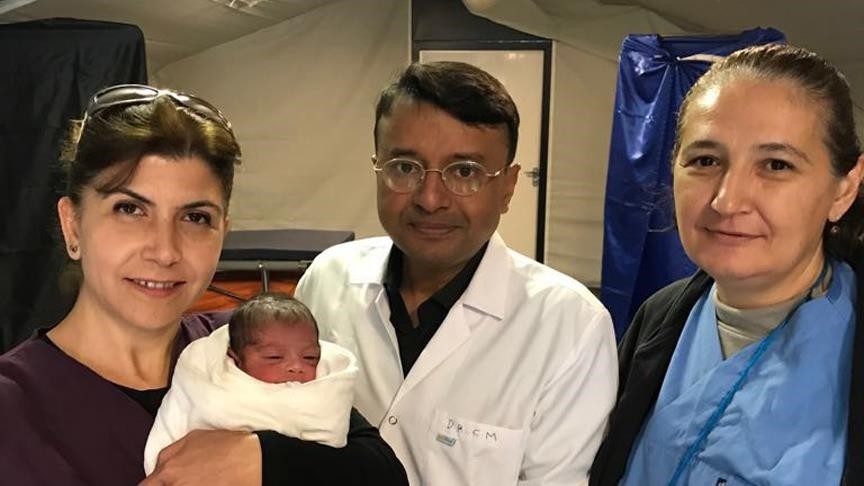 The first baby was born at the Turkish-built field hospital for Rohingya refugees in southeast Bangladesh, Turkish Embassy in Dhaka said on Wednesday.

The embassy announced the arrival of newly-born baby boy via its official Twitter account and posted a photograph of the child and his mother.

Another photograph shows the boy with nurses and doctors working at the field hospital in Cox's Bazar district of Bangladesh, which is hosting the Rohingya refugees who fled state persecution of Myanmar.

The hospital was built and operated by the Turkish Health Ministry and the Turkish Emergency Management Authority (AFAD) for providing emergency health support to the refugees.

Jemaluddin Mohammad, the chief doctor of the hospital, expressed his satisfaction and joy over the successful delivery of the Rohingya child.

Speaking to Anadolu Agency, Mohammad said there were lack of medical facilities at the camp before the establishment of the hospital. "People in the camp were in a very disadvantaged condition. Especially, most of the pregnant women have never been to a doctor. These people did not use iron, vitamin or folic acid."

He said the health care services increased at the camp after the field hospital got operational in January.

"Now patients can easily be examined. They have seen it as a door of hope. They pray a lot for Turkey, particularly for [President] Recep Tayyip Erdoğan," Mohammad added.

More than 750,000 refugees, mostly children and women, have fled Myanmar since August 25, 2017, when Myanmar forces launched a crackdown on the minority Muslim community, according to the Amnesty International.

In a report published on December 12, 2017, the global humanitarian organization said the deaths of 71.7 percent or 6,700 Rohingya were caused by violence. They include 730 children below the age of 5.

The UN has documented mass gang rapes, killings -- including of infants and young children -- brutal beatings and disappearances committed by security personnel. In a report, U.N. investigators said such violations may have constituted crimes against humanity.