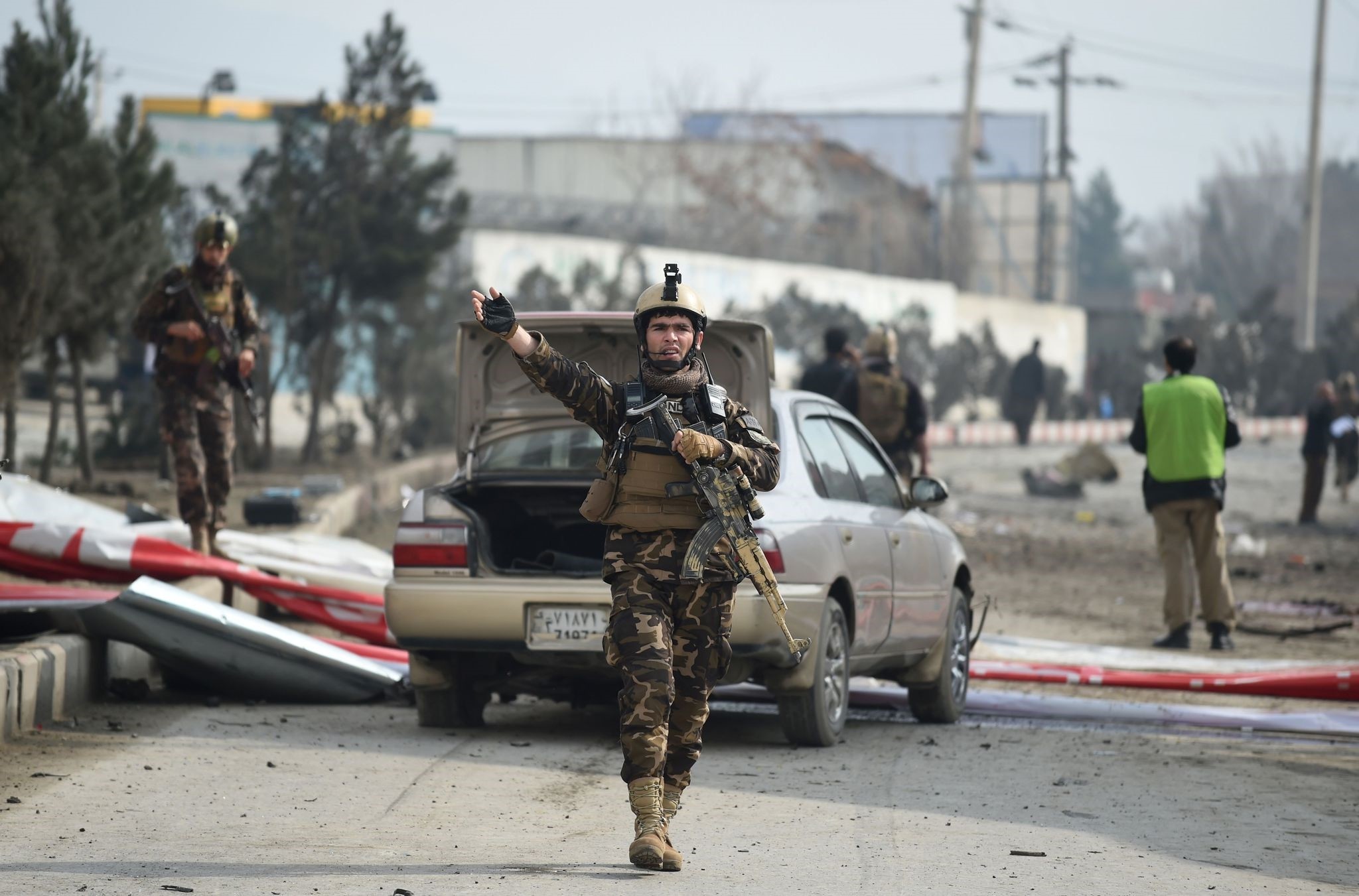 An Afghan security personnel gestures as he arrives at the site of a car bomb attack targeting a foreign forces, in Kabul on March 2, 2018. (AFP Photo)
by Daily Sabah with Wires Mar 02, 2018 12:00 am

"Today, a suspected vehicle-borne Improvised Explosive Device was detonated near Australian Embassy vehicles while they were traveling in Kabul," the statement by Australian Foreign Minister Julie Bishop on the website of the embassy said Friday.

Local media showed extensive damage to the facades of nearby houses, and witnesses reported a strong explosion. Security forces could be seen rushing to the scene as passers-by helped move the wounded.

A horse was also badly injured in the blast and had to be shot dead in the street, an AFP reporter at the scene said.

Australians were not injured, according to the ministry statement.

Basir Mujahid, spokesman for the Kabul police chief, said the blast occurred in eastern Kabul, in an area that is home to a military training center, the government's customs offices and some guesthouses.

"Unfortunately around 9:00 am, a car bombing took place in (the) Qabil Bay area of Kabul. The target of the attack was a foreign forces convoy," ministry spokesman Najib Danish told AFP, giving the toll and adding that police are investigating.

No group immediately claimed the attack, which is the latest to hit Kabul, one of the deadliest places in Afghanistan for civilians as both the Taliban and the expanding Daesh terror group step up their assaults on the city.

The bombing also comes just days after Afghan president Ashraf Ghani unveiled a plan for peace talks with the Taliban, including a proposal to eventually recognize them as a political party.

Ghani revealed his plans in a speech during international peace talks in Kabul this week that went better than expected, with officials in Washington daring to hold out hope that the longest war in U.S. history may be heading to a negotiated settlement.

Kabul has recently seen a spate of large-scale terror attacks by the Taliban and also Daesh terrorists, whose affiliate in Afghanistan has grown stronger since it emerged in 2014.

In late January, a Taliban terrorist drove an ambulance filled with explosives into the heart of the city, killing at least 103 people and wounding as many as 235.

The Taliban claimed the ambulance attack, as well as an attack a week earlier in which militants stormed a luxury hotel in Kabul, killing 22 people, including 14 foreigners, and setting off a 13-hour battle with security forces.

The recent attacks have underscored the weaknesses of Afghan security forces more than 16 years after the U.S.-led invasion toppled the Taliban.